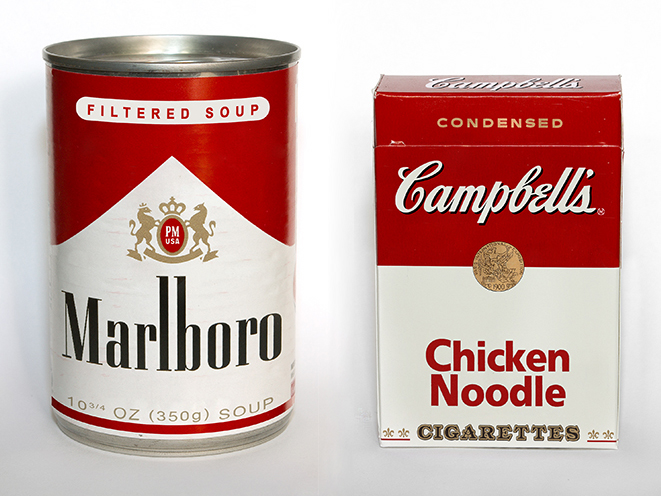 Jeff Goran’s packaging mash-up has already appeared in blogs aplenty… but I like it too! 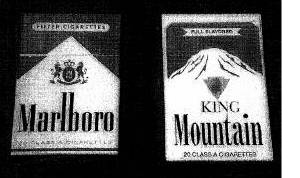 I like how, in swapping the trade dress of these two products from two non-competing categories, he creates a momentary confusion. Although not the same sort of “confusion in the mind of the consumer” that motivated Philip Morris when they took King Mountain Cigarette Company to court earlier this year:

Regarding Campbell’s and Marlboro, there’s little likelihood of any confusion (under ordinary circumstances) because they are sold in different, non-competing product categories. But they are similar…

Perhaps the most successful package redesign of all time was that done for Marlboro cigarettes in 1955 by the designer Frank Gianninoto. The Marlboro cigarette had existed previously in a white pack covered with weak graphic elements and a lot of copy. It was associated with women, at a time when buyers of filter cigarettes were most likely to be women. But filters were beginning to catch on with men too, and the redesign was prompted by the desire of Philip Morris, the tobacco company, to have a filter cigarette that would appeal to all. Gianninoto’s simplification was, in fact, very like the Campbell’s soup can— red on top, white on the bottom, with a coat of arms that like Campbell’s gold medal, tends to disappear. The white meets the red as an arrow pointing upward, a very simple graphic device visible on even the snowiest television set.

Interestingly, it was Gianninoto’s firm, Gianninoto Associates, that in 1999 altered the iconic Campbell’s packaging that Marlboro’s packaging most resembled. (See: After 102 Years, Campbell Alters Soup Labels)

Another thing that I like about Goran’s picture is how the two packaging shapes (can and box) work together like fraternal twins. (Sort of like this can-shaped product packaged in a box.)

« Soup Can Columns
Buckyballs Packaging: Before & After »