Far left: Kaipel Ka’s “Six to Six shield” shield from the National Gallery of Australia; all others from the The British Museum collection

While beer labels have featured “shields” for some time, it was news to me that, in Papua New Guinea, shields sometimes feature beer labels.

The traditional medieval heraldry of beer-brand crests may seem far removed from any violent connotations, but these shields, emblazoned with iconography from South Pacific Brewery’s product line, were seriously intended as protection in battle.

When inter-group warfare recommenced in the 1980s, people in the Wahgi area of the Highlands of Papua New Guinea started making fighting shields after a gap of fifty years.
Wooden shields were used initially, but the subsequent introduction of guns into the conflict led some Wahgi men to replace them with metal ones made from car bodies or 44-gallon drums.Today the use of wooden shields indicates ritual restraint, as distinct from the metal shields required by the bloodier gun warfare.

(And what are “ritually restrained battles” if not the very definition of a “team sport”?….)

To fight is an integral part of life for many highlanders of Papua New Guinea. A system of revenge skirmishes called ‘payback’ had created a seemingly endless cycle of reprisals and retaliations. Fighting in this area could be considered almost a form of sport with clans pitching themselves against enemy clans. The slogan “six 2 six” originally an invitation to party all night long in the Wahgi valley area, has been appropriated into a hostile expression intended to unnerve opponents. In this context, six 2 six, literally means “we will fight you from dawn until dusk, 6am to 6pm”. Commissioned to replicate painted shield designs for various warring groups, [Kaipel] Ka’s work visually acts in much the same way as football team colours.

Ka has incorporated beer advertising designs such as South Pacific lagers birds of paradise and the border design found on cartons of San Miguel lager. 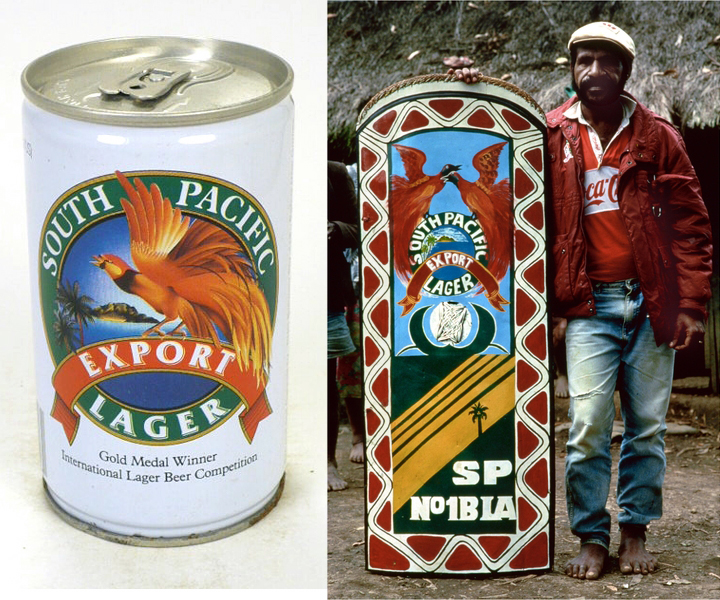 On left: vintage can of South Pacific Export Lager; on right artist/sign-painter, Kaipel Ka next to to one of his painted wooden shields.

Kaipel’s own explanation of his use of the SP design was that he had been asked by senior men to incorporate a representation of a beer bottle on the shield, to make the point that “it was beer alone which had precipitated this fighting”. (The war followed the breakdown of negotiations for compensation after an inebriated Senglap [clan] man had fallen from a Dange [clan]-owned vehicle.) Rather than including a picture of a beer bottle, Kaipel decided instead to make the point by using the SP design as a whole”

At one level, then, this design parallels those that express regret. At another level, there is also something appropriate in the use of beer. Beer drinking is often a “group” matter, just as warfare is. As Marie Reay observes “Clansmen fight together; they also drink together.”

Kaipel Ka’s shields were also cited in an article by Robert J. Foster. Suggesting that, in the era of globalization, a place like Papua New Guinea is “less like a fixed geographic location or broad culture area and more like a localized, concentration of shifting, not-always-symmetrical social networks within a, global web of such networks”  …and, because of this, “…anthropology is badly in need of new maps, maps of the channels through which ideas, images, objects, and people, flow within and beyond the southwest Pacific. Applying this new cross-cultural tracking to Kaipel Ka’s “South Pacific Lager” shields:

“I might begin with its—[the South Pacific Export Lager logo’s]—initial conception and design by cosmopolitan marketing agents and commercial artists in Singapore, headquarters of Asia-Pacific Breweries Limited, a joint venture of the Heineken NV international brewing group and owner of South Pacific Brewery. (Perhaps, however, the logo originated in Port Moresby with locally employed graduates of the National Arts School.) I would want to learn how the logo traveled to Kaipel Ka (or vice versa) and why Kaipel Ka thought it appropriate to decorate the shields of his maternal relatives, as well as his own, with the design (modifying it in the process by “twinning” the originally solitary bird of paradise). I would want to trace the connections between Michael O’Hanlon, Kaipel Ka, and the British Museum, and also trace the movement of the catalogue in which the photo of Kaipel Ka and his shield appears.”

Robert J Foster
Melanesianist Anthropology in the Era of Globalization

A good round-up of the relevant vintage SP lager labels can be seen on Tubuans & Dukduks.

And while we cannot confirm whether the original South Pacific Export bird-of-paradise logo was designed by a National Arts School graduate in Port Moresby—(as suggested in the quote above)—we do have some information about more recently re-designed versions. 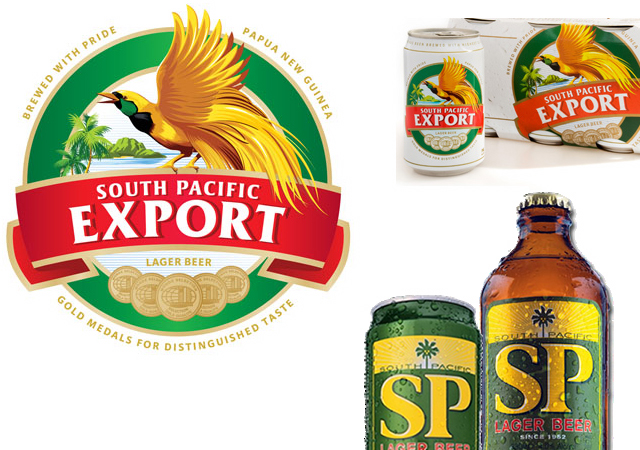 “SP Lager is Papua New Guinea’s most popular, mainstream brew. To fortify its relevance in a increasingly, modern and sophisticated society,  the brand underwent a, facelift and emerged with a new green and yellow label on a, brown bottle,  a prominent SP Lager trademark and a signature, palm tree. The cheery new packaging is expected to connect,
more effectively with young adult consumers.”

And in 2008, the South Pacific Export Lager “bird of paradise” logo was redone by UK-based illustrator, Chris Mitchell:

“…the new fresh dramatic bird of paradise was commissioned by Design Bridge Asia to help reinforce the brands premium status in the international beer market. The canned South Pacific Export Lager is the pride of Papua New Guinea, having won a Grand Gold international beer award.”