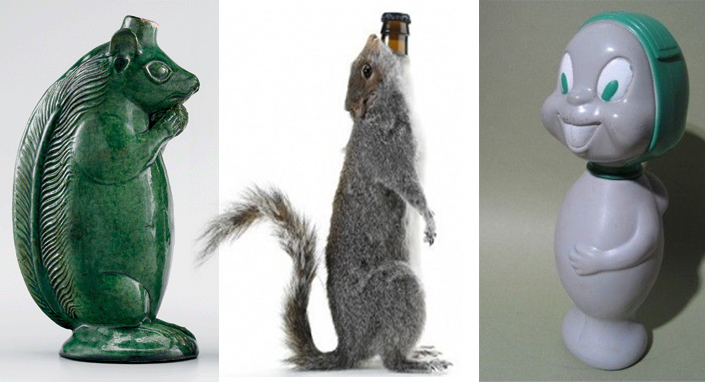 Above, three kinds of squirrel bottle.

1. Above, left: An 1800s Squirrel Bottle from the Moravian potters of Old Salem, North Carolina. (another style with mold on right)

“Of all the bottles produced at Salem, the squirrel form was the most popular, resonant of the general popularity of gray squirrels and flying squirrels as pets. The squirrel bottle, based on the Eastern gray squirrel, was in production as early as 1803. An 1806 pottery inventory lists 96 squirrel bottles. Two types of squirrel-form bottles survive: one that stands erect clasping a nut in its paws, sometimes with a spout in the tail, and the other leans forward and looks upward as if startled or begging.”

In a bottle related lead-in to commercials on the Rocky & Bullwinkle cartoon show, Rocky finds a bottle washed up on the beach:

Rocky: Look, Bullwinkle, a message in a bottle.

Bullwinkle: Fan mail from some flounder?

Rocky: No, this is what I really call a message.

At the end of this conversation, Rocky holds up the message for the viewers at home to see. I couldn’t find an image of that, but what I recollect seeing there was a spiral-shaped scrawl.

3. Above, center photo: this Summer, Scottish microbrewery, Brewdog used taxidermied squirrel bottles (and other taxidermied rodents as well) for their limited edition “The End of History” beer.

(More taxidermied packaging, after the fold…)

Not surprisingly, perhaps, Brewdog’s were not the only bottles I found, made from actual squirrels. the decanter below also relies on taxidermy. (Decanter photo below via: Noah.org) 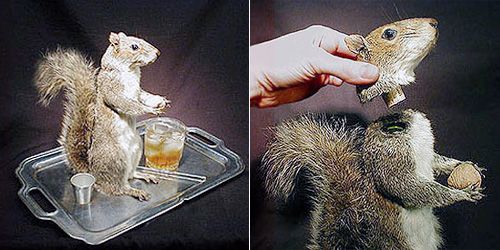 At this point, you may be asking yourself, which is more repellant? Drinking or pouring the product from a bottle spout that emerges from the mouth of a small animal? Or from the neck of a (decapitated) small animal? Not a trivial question, I don’t think.