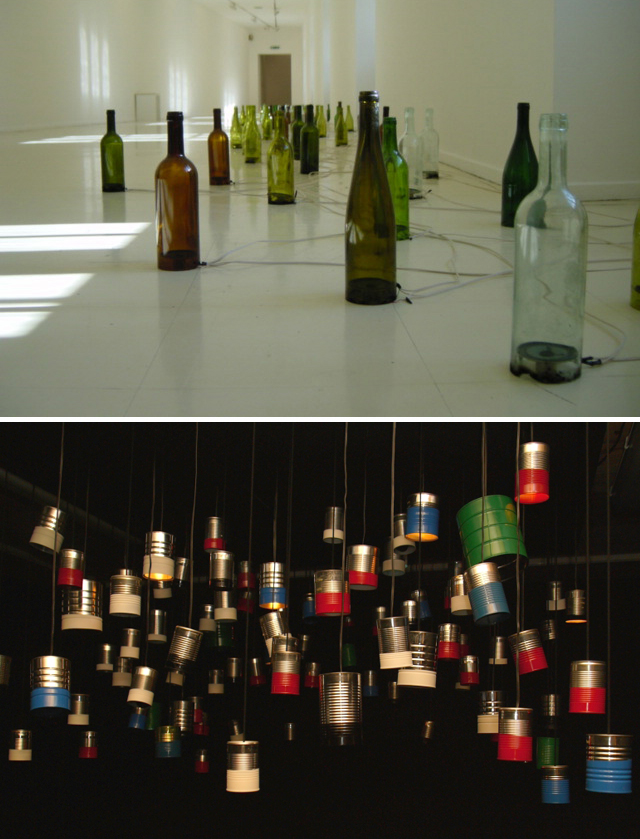 These accumulations of bottles and cans may look, a first glance, like other recent packaging-recycled-as-artworks, but Roden’s interests and intentions seem different. Yes, he is the co-author (with illustrator, Dan Goodsell1) of the vintage packaging book “Krazy Kids Foods”—but in the context of these site-specific sound installations (above), his use of re-purposed, unbranded packaging is maybe beside the point. Still, he does stipulate to drawing some key inspiration from package-related sources.

When I stumbled upon it a Paris fleamarket, Jury’s face and the crudely drawn Earth (or is it the moon?) simply spoke to me — this wonderfully awkward eye candy of the front cover; and then the back, with Jury Gagarin In Space written in seven languages. I still can’t believe that the word ‘space’ in English is equal to the evocative ‘espacio cósmico’ in Spanish; nor that the black printing isn’t really a dark shade of green. With so much to let my eyes wander over, the cover rested comfortably in my painting studio for years before I ever listened to the record inside.

It seems like destiny that the American artist Joseph Cornell became the inspirational doorway for Jury Gagarin In Space to enter my work, as the cover looks like it could have been collaged together by Cornell himself. When a work of Cornell’s inspired me to try to find a way to put the moon inside of a bottle; there was Juri looking down at me, suggesting I finally listen. The record ended up as source material for a sound piece running through 100 small speakers housed in 100 glass bottles. 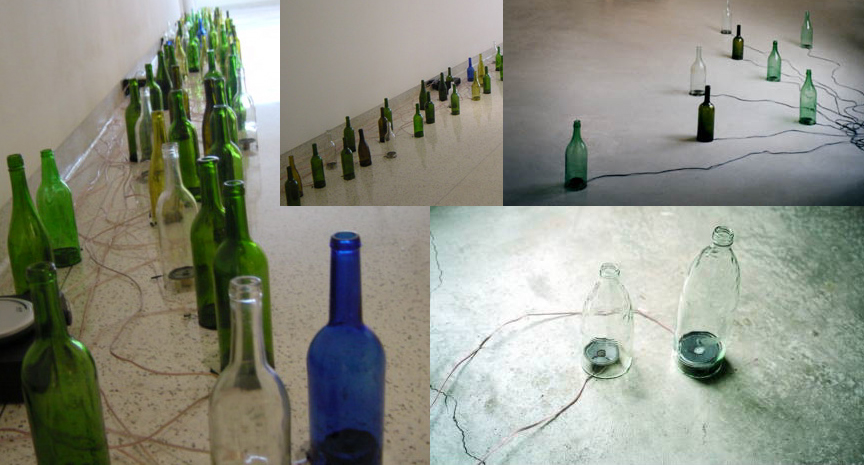 (See how “transmission” ties in, after the fold…)

“I am in the middle of a mass of thousands of very small particles that are brilliantly lit up like they are luminescent. They are bright yellowish green, about the size and intensity of a firefly on a real dark night. I have never seen anything like it. They look like little stars. They swirl around the capsule and go in front of the window.”

In his this 2005 “transmissions,”—(using Arthur Rimbaud’s 1871 color-synethesia3 poem, Voyelles, as a key)—Roden encodes the text of John Glenn’s trippy 1960 transmission into color-coded tin cans:

the installation consisted of 102 color coded tin cans hanging in a dark room—one for each vowel in glenn’s text, and painted in relation to rimbaud’s poem—thus there are 15 blue cans because the letter O appears in glenn’s text 15 times. 64 of the cans contained small audio speakers playing an 8 channel soundwork, while other cans contained small 4 watt colored lightbulbs.

the source material for the audio was recordings of satellites by amateur astronomers from the 1960’s through the 1980’s that i found online, including the first transmission of a u.s. satellite. these sounds were processed and transformed electronically.

–Steve Roden, in be tween noise 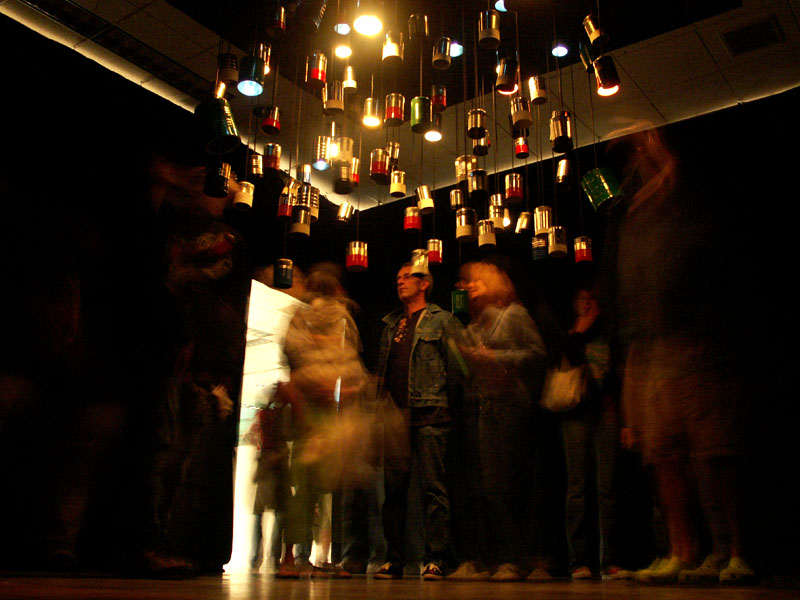 1. Dan Goodsell has been mentioned here before. In addition to his books and illustration work, he runs the Imaginary World website and vintage graphic archive.

2. Not the first time we’ve touched on color-synesthesia. (See also: Spice Rack Synesthesia) Not to put too fine a point on it, but Roden’s interest in color-coded, language-based painting systems reminded me of Christian Faur’s work—not the work of Faur’s, featured on box vox, but some of Faur’s other “color-alphabet” work.

3. I too exhibit a certain nostalgic fascination for the Soviet space program. So much so, that, I could probably justify adding “Russian” to my list of Typepad categories…