Like The Velvet Underground’s “banana” album cover with its novel peeling banana sticker, the other well-known Andy Warhol produced album cover (the Rolling Stone’s “Sticky Fingers” on left) also had novel, conceal/reveal packaging gimmick: a functional zipper, beneath which was another photo of the same model wearing jockey briefs. (See also: Packaging Junk)

Warhol’s chief collaborator for this (as well as the Velvet’s banana cover) was actor & graphic designer Craig Braun. The success of the project was nearly derailed when the zipper packaging began damaging the product:

…a problem was to arise when the first pressings were shipped. Stacking the albums on top of each other caused the zip to press into the album above. This succeeded in damaging the vinyl, ruining side 2, track 3: Sister Morphine. The designer, Craig Braun, was threatened by the record’s distribution label Atlantic, with a substantial lawsuit—but he was to come up with an ingenious, yet simple, solution whilst “very depressed and very high” of pulling down the zipper before shipping so that any damage would only occur to the central label.

The album on the right was the alternate cover (designed by Hispavox Records) released in General Franco’s Spain, when authorities objected to the suggestive zipper package. Not the most appetizing of product placements for Fowler’s West Indian Treacle, but this was probably before anyone had ever thought of suing for product displacement. Note the vintage-style bull’s head can-opener. (via: Sleevage)

(After the fold: Jagger writes to Warhol, “Please write back saying how much money you would like.“) 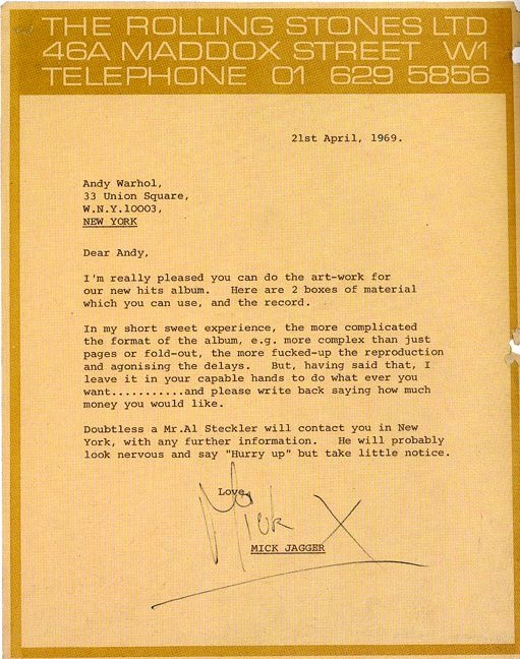 I can count on the (severed) fingers of one hand how many times I’ve ever had a client say to me “Please write back saying how much money you would like.”