Like the two sculptures that we looked at on Friday, Stack Wines are similarly Brancusi-esque and come in white and red varieties.

Founded by Matt Zimmer, Jodi Wynn and Doug Allan, Stack Wine sought to popularize their multi-pack of individual wine portions in plastic cups as a solution to the problem leftover wine growing stale in a recorked bottle.

The STACKED wine concept was the inspiration of company CEO Matt Zimmer, who came up with the idea back in mid-2010. An MBA student at the University of California, Irvine, at the time, Zimmer had his “Voila!” moment after he suffered through some stale wine from a bottle that had been opened several nights earlier. Having a mechanical engineering and packaging background, Zimmer believed there had to be a better way to package wine in smaller servings to keep it fresh. “He literally drew a bottle of wine and put four lines through it,” Wynn recalls.

Although Zimmer may have come up with the basic idea, the patents seem to have been assigned to Nottingham Spirk, who must have played a role in developing the structural concept.

According to Jeff Beason, Project Engineer, R&D/Leverage®, his team tweaked the customer’s initial product sketches and delivered a manufacturable design with the snap-together feature that was a key to enhanced consumer and trade functionality.  The design was completed and approved in just three weeks.

While the structural design for the brand has been singular in its focus, Stack Wine’s branding has been more scattershot. Their logo and the graphic design for the outer sleeve appear to have already been redesigned a couple of times just in the past year or so. Once by LRXD and later by Commune. Originally named “Stacked Wine,” the company has now shorted their brand name to “Stack Wine.”

(One of the patents, after the fold…) 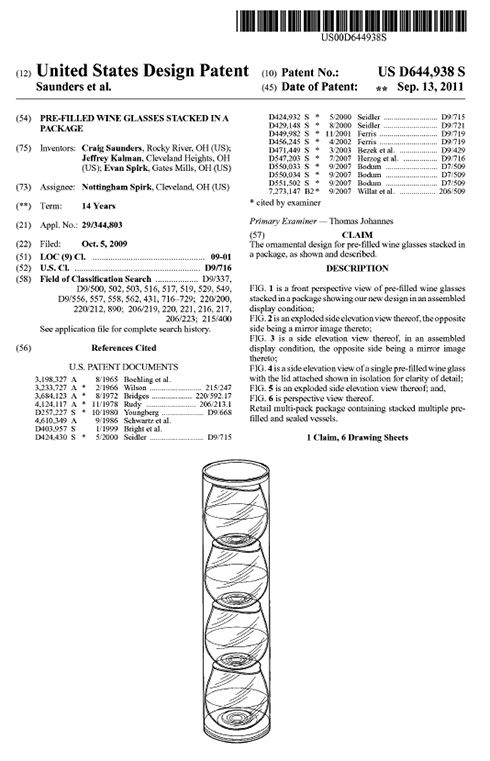