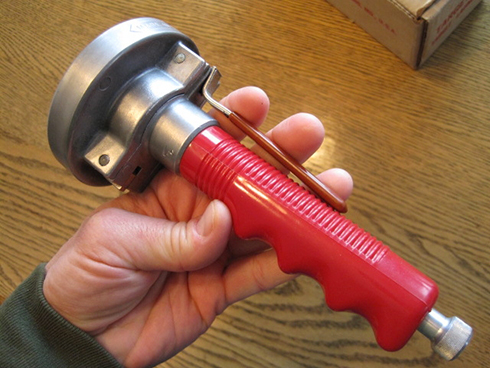 Everything you ever wanted to know about Arthur M. Johnson’s beer-can “Targeteer Target Launcher”…

Shooting at tin cans is a packaging reuse that we’ve covered before. (See: Target Packaging) 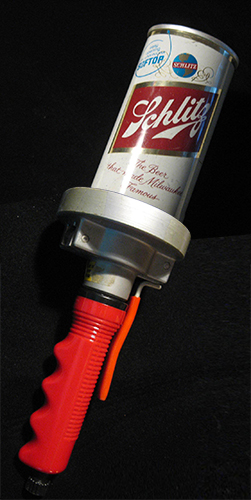 Johnson’s device aimed to make the activity less like “plinking” and more like skeet shooting. Beer cans on a fence are just sitting ducks. The Targeteer makes them act more like flying ducks.

One autumn when he was hunting wild turkey in Pennsylvania, Arthur M. Johnson, a retired Naval officer, stopped to do a little target practice. Both he and the friend who was with him strained their arms tossing aloft the empty beer cans they used for targets. “There must be an easier way to do this,” Johnson opined, as his muscles began to ache. He went home and fashioned his Targeteer, a gun that throws a beer can by the propulsive force of a blank cartridge. Johnson knew he had a good invention because he is an expert marksman himself and has many sportsmen friends. In fact, his first move after he had made up his first two Targeteers was to lend them to friends, one of whom was Pete Brown, the gun editor of Sports Afield. Brown tried the device out on his Arizona ranch, approved it, wrote an article about it in his magazine. It was also publicized and recommended in John Stuart Martin’s authoritative book, Learning to Gun. On the strength of his standing in the field, and this send-off for his invention, Johnson could readily have found a company that would purchase rights to making it.

Instead, he decided that, with sales channels open and the production problems simple, he could make far more money by manufacturing it himself, selling by mail and in major sporting goods stores. His judgment was confirmed by first year sales of 20,000 units, largely mail orders.

Unfortunately for Johnson, the evolution from flat top steel beer cans in the 1960s to the light weight aluminum cans in use today, makes the Targeteer beer can launcher less useful nowadays. The beer cans that today’s alcohol & firearms enthusiasts would have on hand are more likely to be crushed by the propulsive force of the Targeteer’s .22 caliber blank cartridge. And the cans are too light and flimsy to have much momentum in the air, anyway.

One interesting regulatory hurdle for this product was whether or not it should be considered a firearm. In the description above it’s described as “a gun that throws a beer can,” but the catalog ad below insists that it’s “Not a firearm.” 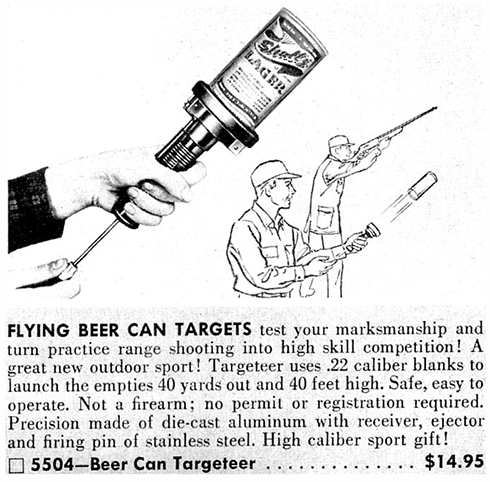 From a 1964 Sunset House mail order catalog (via: And Everything Else Too)

Because it was mainly a mail order product, the packaging for the Targeteer brand target launcher was designed to be a more of a shipping carton than a retail package. 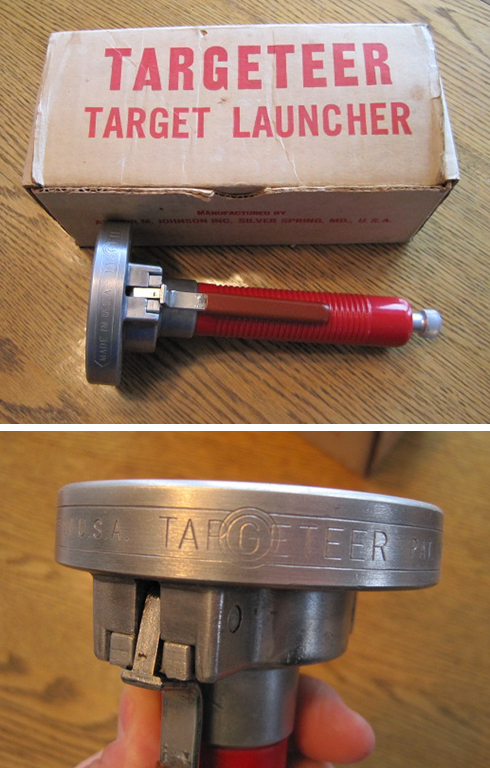 (A video, the original patent and early press coverage, after the fold…) END_OF_DOCUMENT_TOKEN_TO_BE_REPLACED 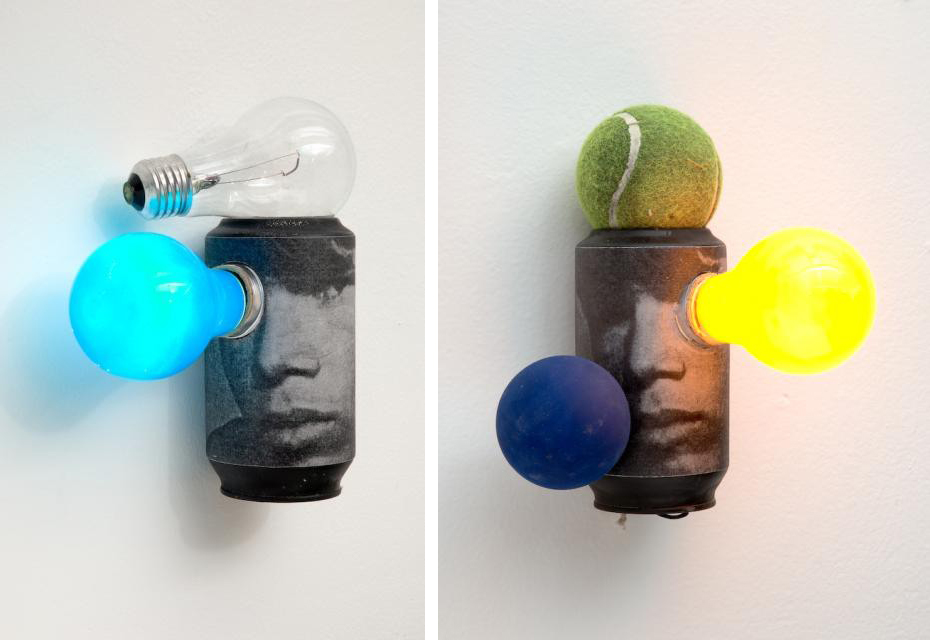 While lighting fixtures made from beer cans in Friday’s post strongly appeal to a certain male, hetero decorative impulse, a similar mash up of beverage cans and lighting also occurs in the untitled “can sculptures” of Paul Lee, but with a differing agenda.

Using everyday objects such as soda cans, light bulbs, and socks, Lee’s Untitled (Can Sculpture) series explores the relationships between materials and their coded cultural and sexual meanings.

…Each of the pieces in Untitled (Can Sculpture) begins with a soda can with a photocopy of a young man’s face pasted over the label. The image is taken from a 70s naturist magazine and was chosen because the boy’s strong classical features exemplify archetypical ideals of beauty and youth.

… Through this sensual fetishisation of everyday consumer objects Lee’s sculptures explore the nature of personal identity, their disposable nature highlighting the ephemeral transience and guilty pleasures of desire.

Note how, in the lower sculpture below, with the two cans connected through the eyes, Lee uses the same kind of “cylindrical completion” that we’ve noted as a package design trend: using a row of separate cans to form a larger whole. (See: Turner Duckworth Coke packaging) While the string joining two cans might, on the one hand, suggest “eye contact” between the two individuals, the matching cans are arranged in such a way that same young man’s face —a single individual— spans the two connected beverage cans. 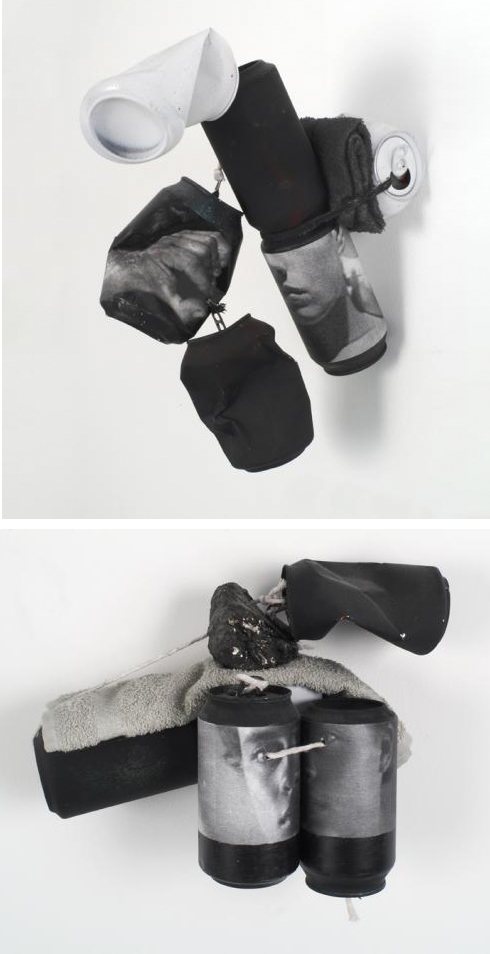 (More untitled (can sculptures) and a video, after the fold…) END_OF_DOCUMENT_TOKEN_TO_BE_REPLACED 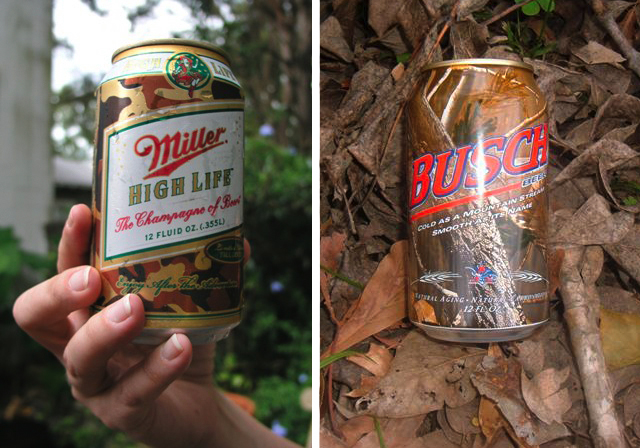 On left: Camouflage pattern Miller beer can (from: The Sparkler); on right: Busch beer’s autumnal camouflage (from: 2CoolFishing message board)

Originally developed as a functional pattern (as opposed to a decorative pattern) camouflage might seem an odd choice for product packaging since the pattern is meant to conceal.

Probably the point of using camo in this context has more to do with masculine connotations of hunting and military service than in concealment.

Miller Brewing had this to says about it’s limited edition camouflage packaging:

Photo, above right, from Wishful Slacker 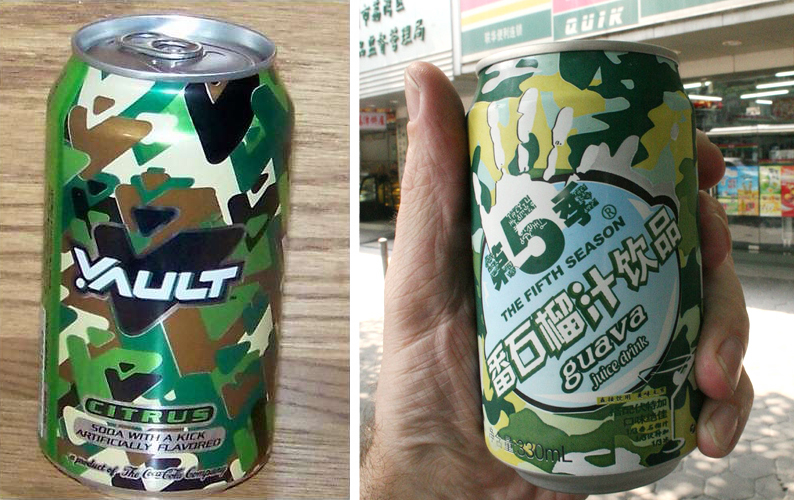 2009 Vault Citrus camouflage can from ebid; photo on right from Eating in Translation 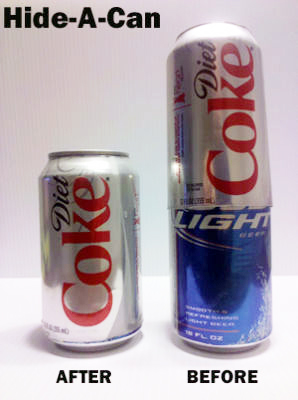 END_OF_DOCUMENT_TOKEN_TO_BE_REPLACED

Definition of “Camouflage Can”…

A can produced in olive green for the U.S. military from 1944-45. It used to be thought that the cans were colored olive green as camouflage, but it is now generally believed that they were painted green simply because the US Army had almost everything it purchased painted that color. Most camouflage cans are rare and are highly desirable to collectors. Many were shipped to troops overseas and so cannot be found in the US easily.

“I wore a certain red dress to a party at the Beverly Hills Hotel. It was a beautiful dress. It cost a fortune. I got it at I. Magnin’s. It was a copy of a French original. But one lady columnist wrote that I was cheap and vulgar in it and I would have looked better in a potato sack.”

In answer to the highlighted hyperbole above, Monroe’s agent, Johnny Hyde, “promptly went down to L.A.’s warehouse district, got a couple of sacks, and had some photos taken of her wearing one.” (via) 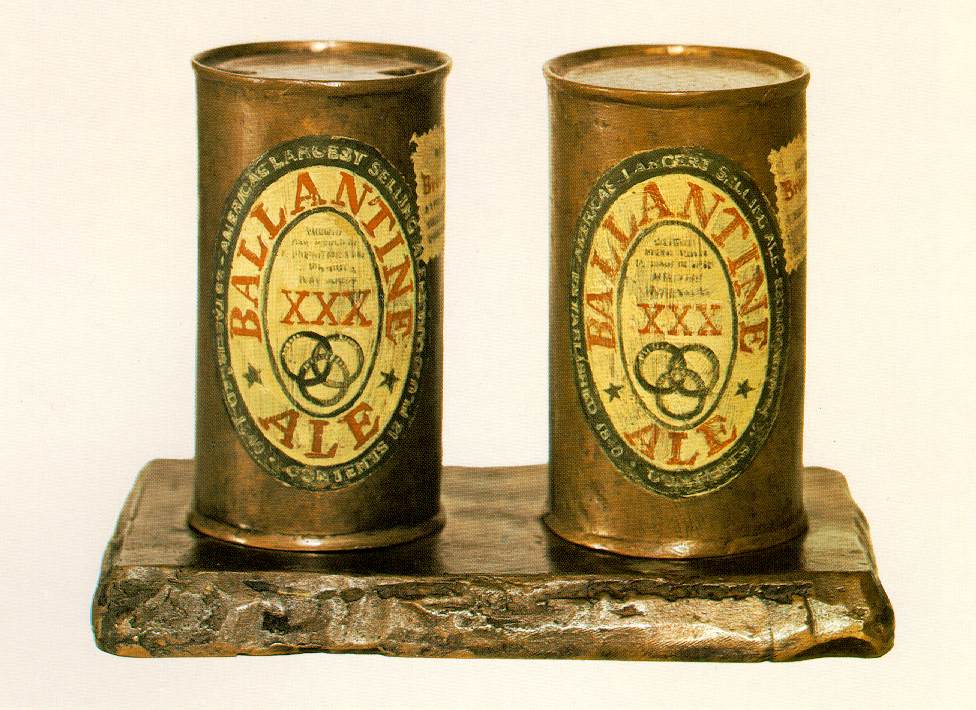 This story is very similar to the story of how Jasper Johns came to create his cast bronze, “Ale Cans” sculpture, based on a crack that Willem DeKooning once made about art dealer, Leo Castelli …

“Somebody told me that Bill de Kooning said that you could give that son-of-a-bitch two beer cans and he could sell them. I thought, what a wonderful idea for a sculpture.”

It’s telling that, in both of these rather backhanded hyperbolic statements, the packaging represents the lowest imaginable thing. A potato sack. A couple of beer cans.

The idea of taking a hyberbolic statement and running with it (as Johnny Hyde and Jasper Johns did) accomplishes two things. It paradoxically proves the point and exposes the fallacy behind it. Burlap bags are not fashionable. Or are they? Beer cans are not fine art. Or are they?

I wonder if a similar rhetorical strategy could be used in package design?

For example, someone could say something like, “Acme Widgets could come packed in a pickle jar and they would still outsell their competitors!” A culturally-savy package designer might then design a category-disrupting “pickle jar pack” for widgets.

The package would still be the scapegoat of the story—(the lowly, loathsome pickle jar)—but the hero of the story would be Acme’s wonderful widgets whose virtues somehow win out despite everything.