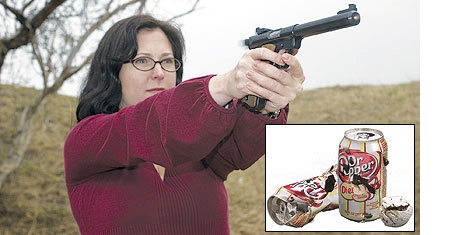 No, not packaging for Target —packaging as target!  Like in the olden days when cowboys worked on their marksmanship by setting an empty liquor bottle or a tin can on a fence post for target practice. Just one more example of how Americans have been re-purposing used product packaging for some time now. Mind you, I’m not proposing this as an alternative to recycling. It wouldn’t do much to stem the tide of soda cans in the waste stream. (Not enough of us have guns for that.)

Plinking
Turns out there’s a name for this practice of shooting at food and beverage packaging: “plinking”—an onomonopoetic word based on the sound that a bullet makes hitting a tin can. Aficionados of the sport have definite packaging preferences…

The plinking game can still be played today with the same basic materials from yesteryear: Tin cans. Corn, beans and other vegetables are still delivered in heavy cans, and a favorite beverage of modern weight-conscious adults—Slim Fast—comes in containers made from the same thick metal.

I’m not talking about flimsy aluminum soda cans, or pressurized aerosol containers. Pop cans too easily fly apart and make a mess, and pressurized cans are simply dangerous because I’ve seen them explode when hit by a high-speed bullet.

The empty tin can is a work of art for shooters, and I am reasonably certain that the original designers from the 19th century probably never had it in mind that their tins would be used by everyone from parents to pistoleros to hone their, and their children’s, gun skills. Many a cowboy turned an old tin can into a makeshift coffee cup, candle holder or water “glass,” but generations of cowboy—and gunslinger-wannabes who first grew up on dime novels, then Tom Mix westerns, and finally Gunsmoke, Have Gun Will Travel and Shane, gave empty tins a higher calling.

(more about “plinking” and packaging after the jump) 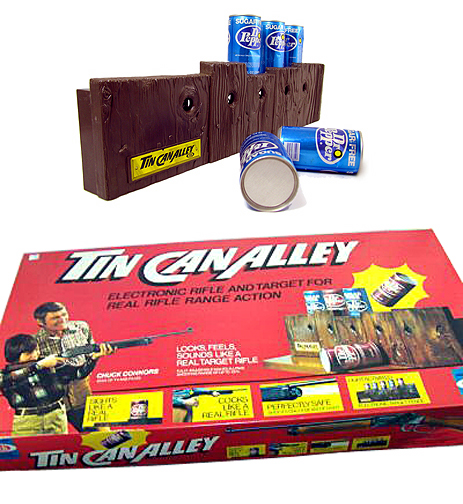 Tin Can Alley
It’s also worth noting that the “plinking” sport has various play-at-home versions. Some, like the version above by Ideal, contain empty Dr. Pepper cans.—(I don’t know what it is about Dr. Pepper that makes people want to shoot at it. The photo at the top of this article also shows a Dr. Pepper can target…)—and others, like the version below, provide you with pretend “toy” cans.

A funny description of the Ideal version of the game from TV Cream Toys cites Tin Can Alley as being particularly American and not a bit English:

Ideal’s Tin Can Alley reeked of the trans-Atlantically exotic.
Everything about it was 100% American and alien to these shores. Rifles
were still largely the preserve of farmers and the SAS, and rugged,
homesteading types like the game’s ’80s TV patron, Chuck “Rifleman”
Connors, were similarly absent from your average Kettering cul-de-sac… As,
indeed, were the “targets” in the game—empty cans of that nefarious
industrial sealant that got lucky, Dr Pepper, a brew so intrinsically
bound to the ’States that even one of the mightiest multinationals in
the world still hasn’t persuaded anyone else to drink the stuff. 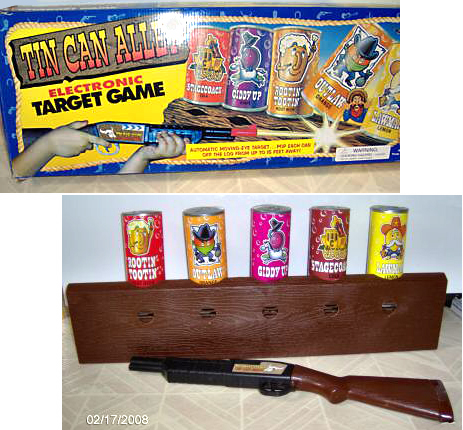 Images from Ebay of what, I presume, is the “knock-off” version of the game