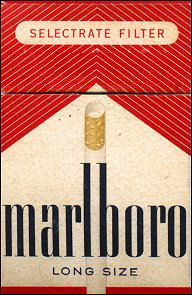 The black and white photos and caption below are from Louis Cheskin’s 1967 Secrets of Marketing Success. He shows two experimental Marlboro packs, one of which has an image of a cigarette in the negative space between the “l” and the “b” of its Marlboro logo.

He calls this 1954 Marlboro cigarettes pack, the designer’s “logical pack” and then proceeds to explain why it was ultimately rejected in favor of a version with a “crest” in place of the cigarette.

As with the “modern” Wheaties packaging that Cheskin was so scathing about in the same book, I was immediately curious about this “logical” (but losing) package design.

It’s hard to really see the cigarette image in the book’s small black and white photo, but, luckily, I was able to find a color photo of the “logical” pack on Jim’s Burnt Offerings. 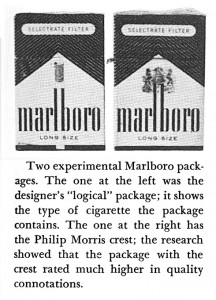 Why so much interest in the pack not taken?

Initially, I was intrigued by this early forgotten example of a brand logo using the negative space between letters as a pictorial opportunity. (Similar to the celebrated FedEx logo with the arrow arrow between the “E” and the “x”)

Others have pointed out how the tall ascenders of the the “l” and the “b” suggested cigarettes rising out of the pack, but I had no idea that those same tall letters had once been used to frame a cigarette illustration in such a literal way.

We’ve already noted that Frank Gianninoto, whose company handled the graphic design for the early “red roof” Marlboro packaging, is often erroneously credited with the structural design of the flip-top box. As it turns out, the graphic design history of Marlboro’s celebrated pack is similarly muddled. (Below: a mention of Marlboro’s prize winning package design and “handsome surface design” from a 1955 issue of Billboard) 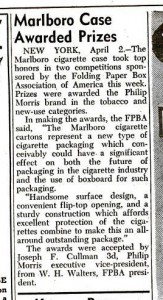 The more you look into the “logical pack,” the more discrepancies you find in the corporate mythology surrounding Marlboro’s early branding.

One popular version of Marlboro’s brand story is that its final package design sprang fully formed from the offices of Gianninoto Associates. Seeing these early versions of the proposed design, however,  it’s clear that there were quite a few significant tweaks on the way to the final version. (Not that any package design is ever truly final.)

The test packs above both have white pinstriped chevrons in the red area, both have a Marlboro logo with an e.e. cummings style lowercase “m” and the pack with the crest, which scored better in Cheskin’s research, shows an extra-elongated “l” and “b” overlapping the crest. Everyone of these features were changed in the final version.

(More about the Marlboro “logical” pack, after the fold…) 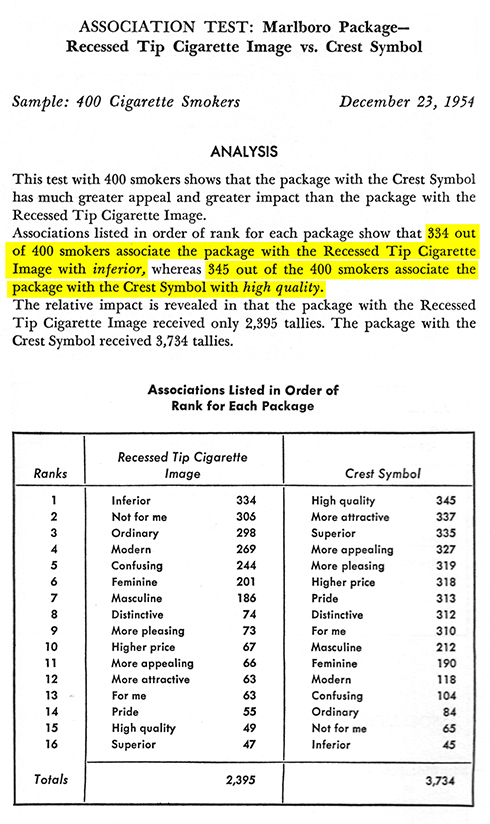 “…the number of package designs were narrowed to two, one design had a picture of a filter tip cigarette, the other a crest. In an association test with a sampling of 805 cigarette smokers, the design with the crest received over 80 per cent favorable associations. Marlboro management chose, of course, the basic package design with the crest image for its new pack. This is one of the most remarkable tests we have ever conducted. It shows that even a small detail like a crest can be very important in the consumer acceptance. Apparently, in the unconscious, or subconscious, the crest is associated by consumers with quality and prestige.”

Louis Cheskin
How to Predict What People Will Buy, 1967 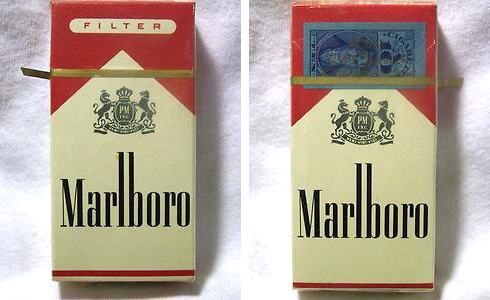 This pack from Worthpoint is another “marketing test pack” from the following year. The “M” has been capitalized, the white pinstripes have been eliminated and the “l” and “b” no longer overlap the crest. The crest however is gray, rather than the familiar gold. (More about that further on.) 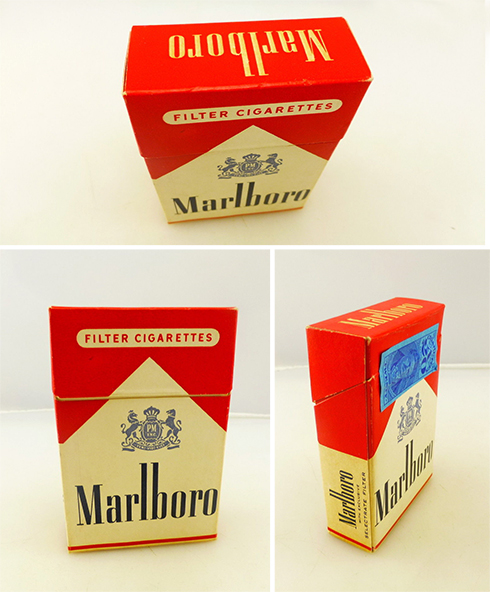 from eBay: a vintage Marlboro box with the gray crest

(Well, not quite the “current” version since the crest was later made gold.)

The new package design came from Frank Gianninoto and Associates and was the result of extensive tests to determine consumer preferences and reactions: its “eyecatching” appeal was stressed in press releases when the new Marlboro was test-marketed. The now familiar red inverted “V” design and Marlboro letters were in place, though the “M” was in lower-case, the red field had white pinstripes, and the flip-top box had a picture of a filter cigarette appearing between the “L” and the “B.” The initial got capitalized and stripes and cigarette didn’t last, but when the field was solid and the cigarette removed, what remained was almost exactly what remains today. 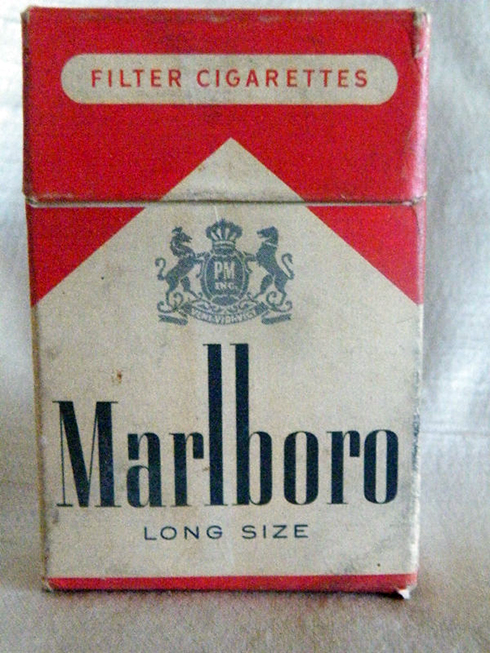 from eBay: another vintage Marlboro pack with the grey crest

Assigned at the time to coordinate the company’s advertising efforts, Millhiser [Ross Randolph Millhiser] worked closely with the packaging design firm of Frank Gianninoto & Associates… to create a distinctive look for the new Marlboro pack. Their one guideline came from Louis Cheskin’s Color Research Institute in Chicago, which had urged prominent use of red on the package to signify a product with a strong flavor; Millhiser, who had always liked the warm look and quality image of the Campbell’s Soup can label, concurred. Gianninoto’s artists offered Millhiser several designs for the Marlboro, but one stood out in his judgment. The bottom half of the box had a white background, but just above the midpoint the white portion began tapering until it formed a right angle point that thus created an overall white shape resembling a traditional house as a child might render it; the “roof” portion, comprising most of the top and lid, was in bright red. This simple but striking geometric design served as backdrop for the brand name, rendered entirely in slender and rather elegant lowercase letters in a serif-style typeface: even the initial “M” in Marlboro was done in lowercase to lend the whole a more casual and stylized look. The ascending portions of the two middle letters—the “l” and the spine of the “b”—were given an exaggerated height, and behind them rose a drawing of a cigarette, surging perpendicularly toward the apex of the “house” portion of the design. For visual interest the red “roof” portion had thin white chevrons added to it, achieving a kind of candy-stripe look.

Every element of the design underwent intense in-house scrutiny. The only major modification made at that point, though, was the removal of the maypole-like cigarette drawing; it seemed too blatantly phallic. But what would replace it in the white “second-story” portion of the house design? Consumer polls showed a favorable reaction to the Philip Morris “crest,” the ersatz likeness of the royal British coat of arms that had lent pedigree, albeit illegitimate, to the original Marlboro and English Blend packs, and so a cruder, miniaturized version in gold was now proposed for the space above the brand name on the new Marlboro pack—to signify continuity, class, and a hint of elegance lacking in the dirt-plain Winston design. But brand manager Millhiser objected fiercely. “I was for our purposely dodging the elegance,” he recalled, but though outvoted on the inclusion of the crest, Millhiser was so strongly against embossing it in gold—the company had too long “catered to the tastes of the effete East and West coasts,” he felt, and ignored the more primal appeal to the heartland—that he persuaded the company to print the crest in a dark grayed blue.

…The Burnett agency was sent the projected Marlboro package and … Philip Morris … at once got two pieces of advice about the Marlboro package. American consumers expected their brand names to begin with a capitalized letter; the lowercase “m” at the beginning of the Marlboro logo as presented on the package may have been different, but the differentness served to trivialize the product—it had to go. Similarly, the diagonal peppermint stripes that formed the chevrons on the red “roof” of the pack were too fussy and distracted from the clean, strong basic design.

“The package they were using seemed pink because of the stripes, and it had an effete look. Why not make it red? Take the damn stripes out of here.” 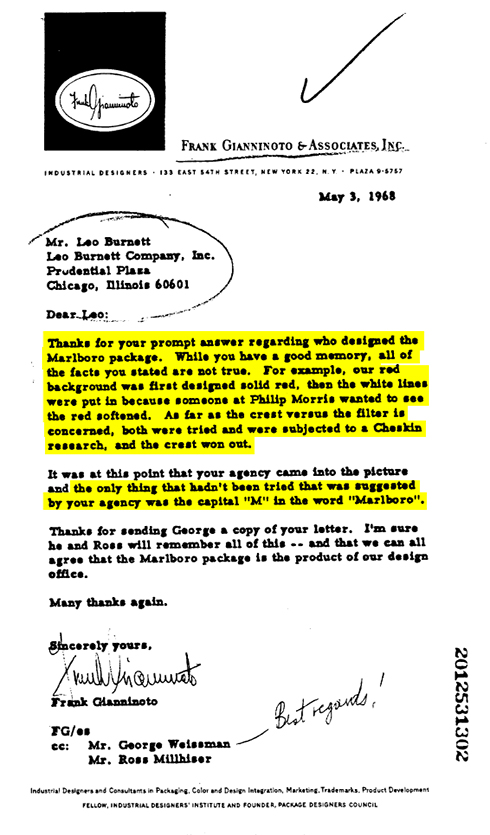