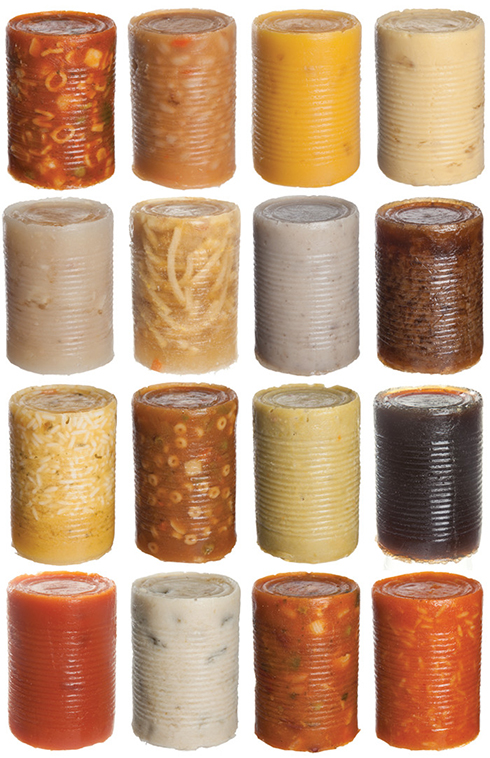 “They were made to be completely edible and free standing. No freezing, no armature, just soup and a secret ingredient to make them stand after being removed from the mold.”

While there has been some justifiable backlash to the endless artistic retreads of Warhol’s (Campbell’s) soup cans, I think Wohlman’s idea has some subtlety and, well, depth.

To see 32 soups from Campbell’s product line (debranded, unlabeled and removed from their identical cans) sort of upends the whole Warhol/Campbell’s Soup Can thing.  Delving “deeply” into the contents of a package, after all, is sort of the opposite of what Warhol was all about. 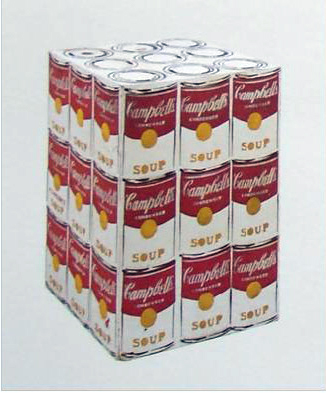 On the right: Warhol’s 1962 “Campbell’s Soup Box.”  This sculpture is new to me. I don’t think it’s been reproduced much.  It’s telling that, in one of the few package-related sculptures where Warhol reveals what’s inside, the ‘contents’ of the package turn out to be additional packaging.

Similar to the later painted plywood box sculptures that Warhol made, but here, the box is not a reproduction of a Campbell’s shipping carton, but a mock-up of a non-existent Campbell’s soup box.

I like the diagrammatic way the side panels and the top of the box serve as orthographic projections of the cans contained within—(or would be contained within, if this were an actual package.)

As with his soup can paintings, there’s little visual indication of what’s contained within the cans, themselves, just as Campbell’s classic red & white labeled cans never used to include photos of any actual soup.

Warhol’s paintings exaggerate the key features of Campbell’s success: package standardization and visual imprinting through repetition. His Soup Cans amplifies the power of a strong fixed package design and brand-name image, even as such uniformity reduces to virtual insignificance the individual character of any particular variety of soup, of any one item in the series. Sameness rules and packaging reigns supreme. Indeed, the container’s contents are irrelevant to the package’s design, which conceals the now-invisible product.  Warhol exaggerates these packaging features by treating the soup cans as flattened facades, surface-oriented images that give no hint of what is inside or even that there is an inside. In several paintings that depict torn Campbell’s Soup labels, he presses the irony, showing only a tin can beneath the celebrated label — not soup, just another package.

As the torn label (mentioned above) reveals “another package” beneath, so too Warhol’s Campbell’s Soup Box (an imaginary 27-pack) reveals its contents to be 27 more packages.

If Warhol’s Campbell’s Soup Box suggests a transparent package, it only lets us peer so far into its interior. Wohlman does what Warhol never did and shows us the actual soup, as if the cans, themselves, were transparent. (See also: Packaging & What Lies Beneath)

(More packaging vs contents + 28 soups, after the fold…) 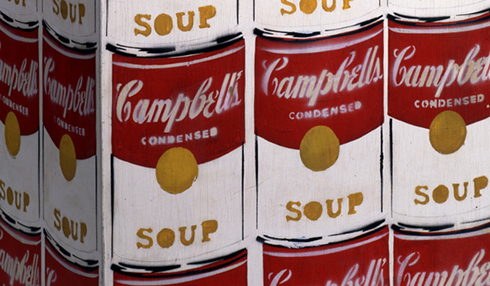 Jonathan E. Schroeder makes a similar point about the ways that branding and package design can sometimes eclipse the product. 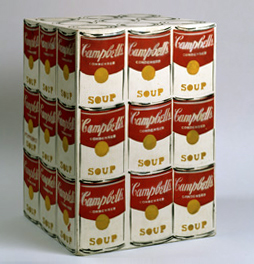 Warhol changed the way we look at products, especially Campbell’s soup. The Campbell’s brand has meaning apart from that of a heavily advertised consumer product, because of Warhol’s art and ensuing fame. Indeed, the Campbell’s soup company, initially antagonized by Warhol’s use of their trademark, hired him to paint a series of Campbell’s dry mix soup cartons in the 1980s (Honnef 1991). Warhol’s major work prefigured scholarly attention of brand equity…

Warhol showed us that a well recognized brand name might succeed in attracting consumers in a different context—brand extension. He demonstrated that consumers’ positive feelings about products often lay far outside the product itself—he did not paint Campbell’s soup, after all, he painted the branded can.

…Warhol’s “boxes” series isolates package design, focusing our attention on the package as an object in its own right. These works are wooden sculptures, made to look exactly like shipping cartons for popular consumer goods-Del Monte canned fruits, Brillo cleaning pads, Campbell’s soup. Warhol achieved a great deal of notoriety, scorn, and press from the boxes series, and they remain some of his most successful works. In the Campbell’s soup can painting series, Warhol takes a close look at packaging, too. In Big Torn Soup Can, for example, he shows us the package behind the label, calling attention to the object of consumption. In this painting, a brand extension, if you will, of his earlier soup can paintings, the Campbell’s label is torn, hanging off the can, but still instantly recognizable. The can is exposed, and in some hints of a painterly technique, its steel case reflects light toward the viewer. One is struck by the dual packaging of the image — the label and the can. The can looks plain, uncovered, unlabeled without the Red and White Campbell’s. We realize that labels reassure us of safe contents, protecting us from harm. 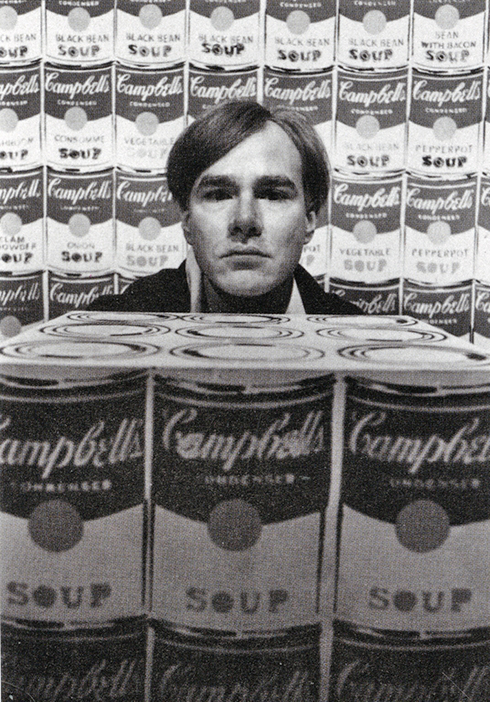 In 1985, Warhol was hired by Campbell’s Soup to create a series of painting for their dry-mix soup boxes.

These later “Campbell’s Soup boxes” were quite different from his 1962 sculpture, and did, in fact, depict the soup itself (rather than the outside packaging).  In one of his diary entries from the same year, however, Warhol expressed some dissatisfaction with the project…

Went to the Whitney. I was there to “advertise” my Campbell’s Soup Box painting. And for all the work and publicity, I should’ve charged them like $250,000 — I mean, they’re a huge company — instead of just the cost of a portrait. We must be getting desperate. Me standing there twenty years later and still with a Campbell’s soup thing, it felt like a New Yorker cartoon.

via: Diary of a Star 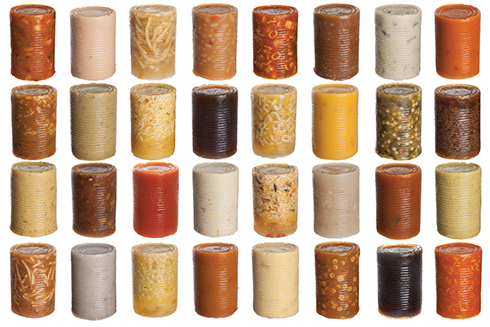