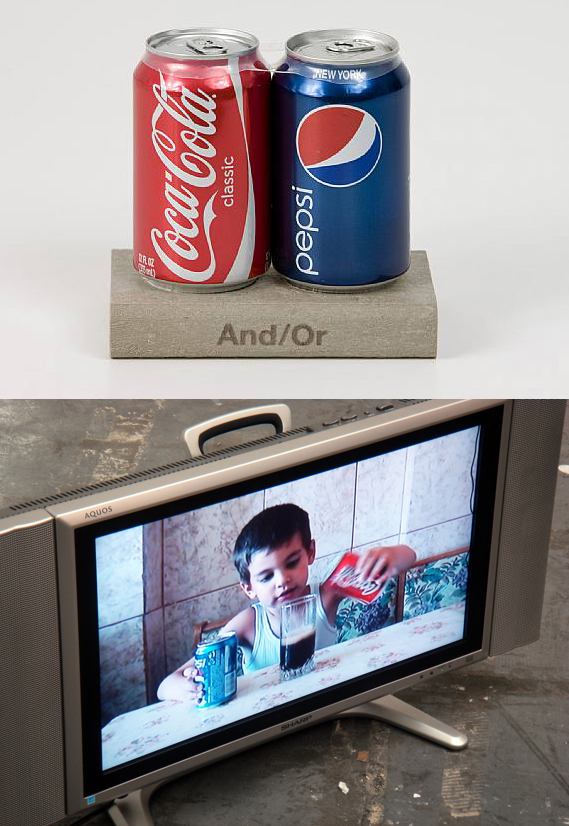 Conceptual art: two takes on the concept of Coke & Pepsi. Jonathan Horowitz, above with “And/Or” and Ciprian Muresan, below with “Choose”—(photo via Risknfun’s Flickr Photostream)

In 2008 Horowitz had an exhibition entitled Obama ‘08’ that documented the red state/blue state cultural divide. The gallery was carpeted half in red, half in blue—(a piece entitled,“Your Land/My Land.”) On election day the gallery functioned as a place to watch the election results and—this being the blue city-state of New York—those in attendance were certainly pleased with those results.

… But beneath the jubilation at this ground-breaking victory was a critique that ran throughout the exhibition, of the bipartisanship that divides the USA, concisely summed up in one piece: a vending machine selling Coke and Pepsi (Coke and/or Pepsi Machine, 2007–8). Whether it comes in a red or a blue can, the contents are basically the same. Freedom of choice is just an illusion.1

ArtForum had a similar interpretation of the dual-party soda-machine:

Nearby, a soda vending machine (Coke and/or Pepsi Machine, 2007) offered us the archetypal consumer-culture menu of non-choice as choice, difference as sameness: Pepsi as the blue candidate, Coke as the red candidate, a reference to the corporatization of politics and the politicization of consumption.

In a smaller scale version of “And/Or”—the competing soda brands are simply handcuffed together like unfortunate rivals on a chain gang —(also calling to mind: Martin Kippenberger’s beer-can handcuffs). About the political content in his work and the soda can 2-pack, Horowitz says:

CHRISTOPHER BOLLEN: Do you get a rise out of your own work?

JONATHAN HOROWITZ: Sometimes. But more the idea of the work than the work itself. I don’t like to have any of it around me. The materiality of it gives me anxiety. Maybe I’m afraid that it will all fall apart, or maybe I’m reminded of how I can never really get anything exactly right. Oh, but on my desk I have a can of Coke and a can of Pepsi that I attached together with a section of plastic six-pack rings. That, I think, I got just right. 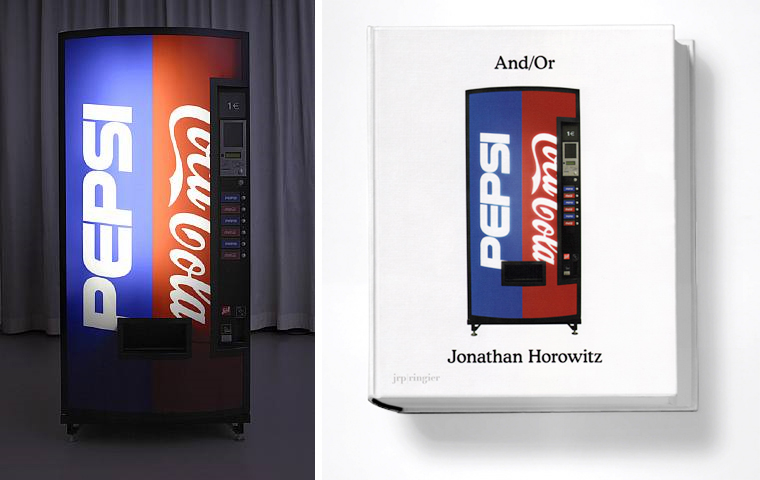 Coke and Pepsi are also brought together in Ciprian Muresan’s “Choose” video—but in a different way.

“…a Romanian boy mixes Coke and Pepsi into the same glass. In defiance of the old taste test marketing campaign, he gleefully drinks the brown concoction. In a country like Romania, where consumer goods are relatively new (since the fall of communism) drinking cola is a political act.  …Putting both colas into the same glass is in contradiction to the title of the piece, there is no choice to be made.” 2

It turns out, the Romanian boy is the artist’s son, Vlad.

Ciprian Muresan’s video Choose… part of a significant body of work dealing with the father-son relationship, sees Vlad Muresan mixing Pepsi and Coca-Cola in a glass. The child’s prank rings, in the context of Muresan’s practice, pre-apocalyptic: a glimpse of the moment when carefully marketed differences merge in the same viscous paste, a rehearsal for the collapse of identities. –Art Tattler

The artist stipulates that the work with his young son is, in fact, collaborative…

We “collaborate” before on different projects like the video called “Choose” …when he have this idea of mixing the same quantity of Coke and Pepsi in the same glass, because for him the taste was not such different, but the image of the brand, yes.

from an interview with Ciprian Muresan
in Art Review, October 7, 2009

(See a portion of this video, after the fold…)

The blue = liberal, red = conservative motif of American politics is not a global standard by any means. Each political party of each country chooses its banner in a process ranging from dictated to arbitrary. Once established, however, these become entrenched into the landscape of the product base. A purchase of red, is a conservative vote; a purchase of blue, is a democratic vote, the purchase of a third party color is a wasted vote.

The soft drinks Coke and Pepsi can be divided by color: Coke, with its certain red branding, and Pepsi, with its patriotic  red-white-and-blue background, but clearly blue branding….

John D. Casnig, 2003
excerpted from “The Politics of Inertia”

The prevalence of the metaphor, notwithstanding, most companies are pretty leery of actually taking sides in volatile political campaigns. Companies do what big, special-interest groups do. They do not make a choice. They support both sides. (See: Partisan Politics & Package Design)

Of course, as deeply divided as America is lately, either demographic (red or blue) still represents a huge market. But even if a company takes a chance on being associated with one side or another, there’s no guarantee the that constituency will buy into it. Even though Pepsi tried to associate its new logo with Obama’s campaign, it didn’t make Pepsi the beverage of choice among leading democrats. So even if Coke and Pepsi have become symbolically associated with right-wing and left-wing politics, it’s not something these brands can control or take to the bank.

2. The other thing about Coke & Pepsi serving as a metaphor for choice, is that it’s usually intended to be discouraging and fatalistic. It expresses the depressive sentiment: “Why bother? It makes no difference what we choose.” But turned around the other way it might be seen as a good thing. Wouldn’t it be nice if all of our divisive ideological differences—were felt to be no more threatening than our differing tastes in soda pop?