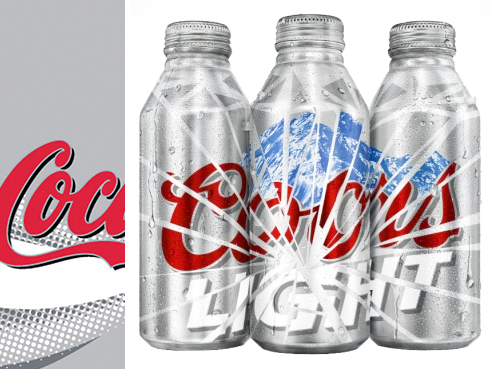 Walking on the sidewalk last week, I happened past a flatten-out paperboard beverage carton with a “shattered” red script logo. At first glance, I thought it was a logo for Coca-Cola Light, but upon closer inspection, I saw that it was actually a Coors Light logo.

The spring “shatter” design represents the transition from winter to spring and breaking through the ice.

Depending on which way the can is facing, for example, the only letters of the logo visible to consumers might be “Co…” Perhaps most consumers are familiar enough with the differences in script styles not to be confused into imagining that the rest of the word is “…ca-Cola.”  Breaking up the logo into puzzle-like pieces, however, might increase the likelihood of confusion.

(a video about the design of Coors recent “limited edition” packs, after the fold…)