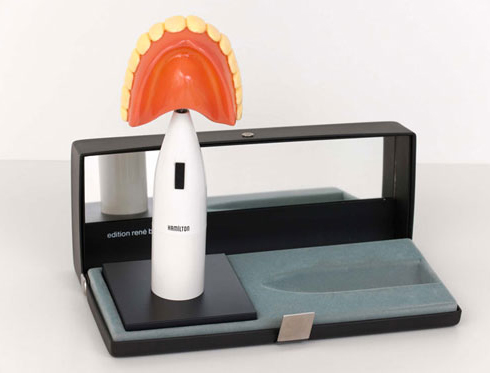 I’ve long admired Richard Hamilton’s 1968 artwork entitled The Critic Laughs —(see: Art & Dental Hygiene)— but I never knew about the television commercial he made promoting it as a luxury product…

from “The Shock of the New” (Via: Rob Walker, apropos of As Real As It Gets)

It was filmed as part of the 7th episode of Robert Hughes’s 1980 documentary television series, The Shock of the New because Hamilton didn’t want to be interviewed. (Although he wound up being interviewed at length, nonetheless…)

Hamilton introduced his expensive, witty multiple The Critic Laughs (1971-72) and then showed the bizarre, amusing film intended to publicise it. This film simulated the style of a TV commercial; the female star of the “advert” was Loraine Chase. (It seems Hamilton had not wanted to be interviewed and so, as an alternative, he had suggested the idea of a spoof advert. This was how the film came to be specially made by the BBC for Shock of the New.)

Since the interview form held no appeal for Hamilton he proposed to the producer that he should make a ‘TV commercial’ advertising ‘The critic laughs’ and he wrote a script for his product. The story-board calls for a beautiful young woman to enter a luxurious bathroom bearing a gift for her partner who, bemused at the sight of the assembled teeth and electric brush, realises that the vibrating object is more for Her than for Him. Meanwhile the voice-over says the following:

Product, package and promotion material is the cycle of the consumer goods industries. Nothing in my experience and practice suggests that this same cycle does not apply to that category of human activity we label “art”.

“Europe’s caring craftsmen” is a wonderfully constructed bit of adspeak… maybe a good name for a band? (In the commercial, the voice-over actually says “Europe’s most caring craftsmen”—making the phrase more hyperbolic and competitive.)