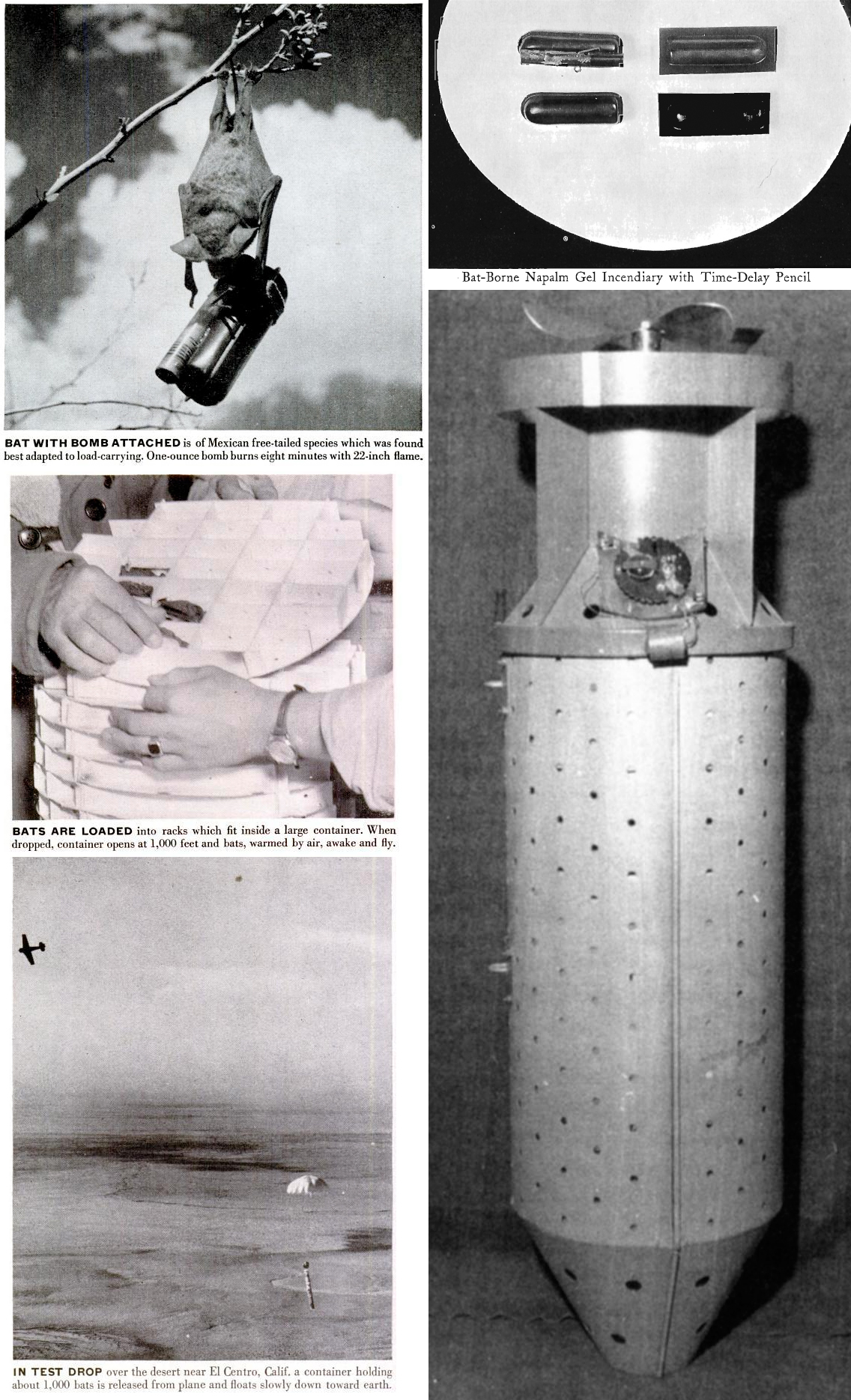 In addition to work on a “Molotov bread basket” style incendiary bomb, Larry & Bing Crosby’s company also had a hand in development of a container for “Project X”—Lytle S. Adams’s idea to launch a surprise attack on Japan using a cluster bomb of bats, each carrying a small incendiary bomb. When I first read about this project it reminded me of recent fiction involving a US government project to weaponize vampires, who unfortunately escape. (As did a few of Adams’s armed incendiary bats.)

Eventually the “Project X” bat bomb lost ground to the Manhattan Project’s atom bomb, but for a while it was a contender. Below is FDR’s memo approving the project:

This man is not a nut. It sounds like a perfectly wild idea but is worth looking into. You might reply for me to Dr. Adams’ letter. 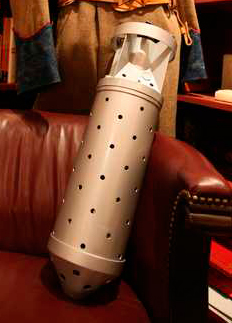 Doc made arrangements with a small manufacturing and engineering company owned by Bing Crosby, the popular singing star, and his brother Larry to fabricate the bat bomb carrying shell to his design. The five-foot-high sheet metal container, which superficially resembled an ordinary aerial bomb with its fins and cigar shape, would hold the compartmented cardboard egg-trays of bats with their attached incendiaries, along with environmental controls — cooler and heater — and a parachute with its deployment device…

In the secrecy of the Crosby factory, located in converted rooms beneath the grandstands at Del Mar horse racetrack, the bat bomb carrying shells were assembled, complete with parachute, automatic barometric opening device, and a small warming unit to bring the bats out of hibernation prior to the drop. The performance of the new sheet metal shell would be an essential part of the Carlsbad test.

Doc had designed the container himself — the cardboard prototype twas the one that had been torn to pieces by the slipstream at Muroc— and it was during the blueprint stage that Adams, in a private moment incidental to the greater work, took a family picture into a shop for framing. As he waited for the proprietor to cut the matt and put the frame together, Doc struck up a conversation in his ever affable way. As they talked, Adams watched the skillful way the framer went about his work and noted the adept use of his hands. Doc came out of the shop with the framed picture under his arm— and with a new recruit.

Andrew Paul Stanley was just the person to cut and glue the cardboard model of the bombshell with its many-compartmented accordion of paper trays. Later he would work with the Crosby Company to make the metal shells and their cardboard contents. Each shell would hold 1040 bats with their attached incendiary bombs. Each bat would fit snugly into a cubicle in a tray much as an egg fits into an egg crate. There would be 26 of these round trays about 30 inches in diameter in each shell. The trays were to stack one on top of the other with the open sides down, all connected together with strings at the edges so that, when suspended from a parachute, the set of three-inch-long strings between trays held one tray above the other like an open accordion.

On December 21, 1944, the day after Dr. Young and I had returned from the Dugway test, I went out to Hollywood for a conference with Larry Crosby of the Larry Crosby Research Co., an engineering firm set up jointly by Larry and Bing Crosby. The conference was about a container, or shell, or bomb, to be loaded with bats in hibernation, with incendiary bombs attached. My records are incomplete, but my recollection is that Dr. Young made the first contact with Larry Crosby Research Co., that Col. Rhoads then assumed responsibility for the design of the container, and that the Larry Crosby outfit came up with an acceptable design.

Louis F. Fieser
The Scientific Method: A Personal Account of Unusual Projects in War and in Peace

“We got a sure thing like the bat bomb going, something that could really win the war, and they’re jerking off with tiny little atoms. It makes me want to cry.”

Lytle S. Adams as quoted by Steve Silverman in
Einstein’s Refrigerator: And Other Stories from the Flip Side of History

« Molotov Metaphor: a drink to go with the food
Clash of the Condiments »