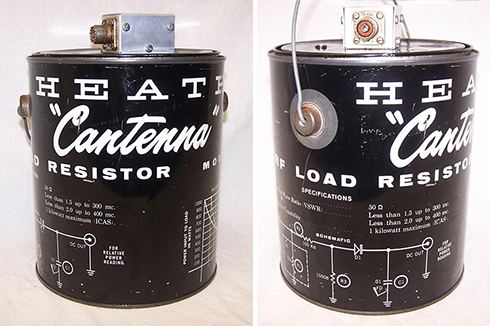 A vintage Heathkit Cantenna on eBay for $19.50

In 1968 when I was in 5th grade, an electronically-inclined kid named Brock lived across the street from me. During art class instead of drawing still lifes or landscapes, he would draw electronic diagrams, similar to the one on this can. This made a big impression on me, both as an alternate form of creativity and just to see someone my age who was so fluent in (what was to me) a completely foreign language of symbols.

I reckon Brock was exactly the type of customer this product was intended for.

The term “Cantenna” originally referred to a product sold by Heathkit Co. in Benton Harbor, MI, USA. It was a high-wattage 50 ohm resistive load in a metal can filled with transformer oil, used by radio amateurs as a substitute for an antenna system, for adjusting transmitters. The word is a portmanteau blending the words can and antenna. However, in the do-it-yourself community, it has come to be used for homemade Wi-Fi antennas made with an empty metal can. 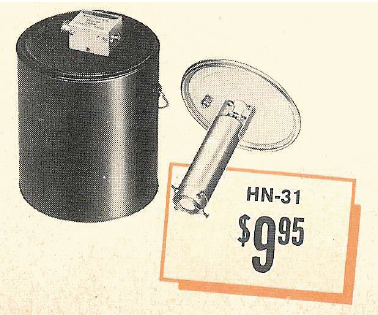 I was going to do a round-up of DIY Wi-Fi “cantennas” in general, but after learning about the original Heathkit Cantenna, I was waylaid…

The Heathkit HN-31 Cantenna:
In 1961 Heathkit… introduced the HN-31 Cantenna dummy load. The Cantenna was well received by the ham community because of its low price and high performance. It can handle a full kilowatt for up to 9-10 minutes, depending upon the cooling oil used. The SWR remains under 1.5: 1 at frequencies up to 450 MHz. When originally introduced the Cantenna was priced at $9.95. The name Cantenna is very apropos as the dummy load is built into a one-gallon paint can. All components mount on the lid of the can.

We’ve looked at other electronic apparatus involving paint cans and the like. The Can Amp and Oatmeal Box Radios come to mind, but where those had an element of cross-category caprice, these “dummy load resistors” required a container full of oil for cooling purposes. Use of a paint can in this case was therefore a functional choice rather than a marketing decision.

The earliest 1961 incarnation of the Cantenna was apparently a blank, black can. The 2nd version added the white type and electronic schematics.

(A later version of Heathkit’s Cantenna and the competition, after the fold…) 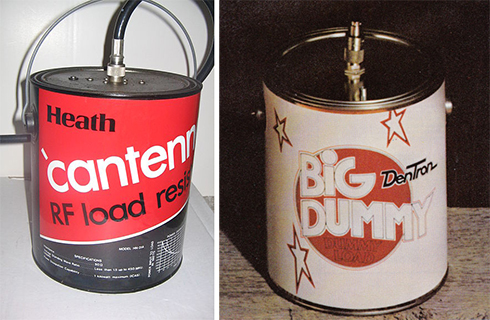 Photo of “Big Dummy” in context from k6bsr’s Flickr Photostream

An interesting story about the popularity of Big Dummy and its logo:

I owned and operated a ham radio sales and service store in Broken Arrow, Okla. from 1970 to 1981…

The Big Dummy was very popular and was a good competitor to the Heathkit Cantenna, which had been sold as a kit for many years. Both of these dummy loads provided a heavy non-inductive 50-ohm resistor that was suspended in a 1-gallon paint can type receptacle filled with transformer oil and a coax socket on the top lid. Whereas the Cantenna was sold and shipped dry and required the buyer/user to find a source of transformer oil, the Big Dummy was shipped complete and ready to use with the transformer oil already installed. In a pinch, for the Cantenna, you could buy mineral oil in quantity from a livery supply store where it was sold as a horse laxative. Also, the Big Dummy came out just about the time when it was reported that the older transformer oils, used for many years by the power companies, contained PCBs which were said to cause cancer. The power companies were scrambling to replace the older PCB transformer oil with oil that contained no PCBs. Dentron advertised the Big Dummy as complete with transformer oil, which was totally safe, as it contained no PCBs.

I don’t know the total number of these dummy loads that I sold but I do know that only the original big box of 12 units came with a complete shipping box. From that point on, every time I received a large box of the product, the Big Dummy logo, which had been printed on the outer panel of the box, had been cut around by probably a pocket knife, and the box showed a big circle of the inside of the cardboard making up the box. You could only see the naked rippled inner piece of the cardboard inside where the outer skin (and its message) had been removed.

I am firmly convinced that there were many truck lines between the factory in Ohio and my store in Broken Arrow, OK, which sported a forklift driver with a printed circle of cardboard, which said, “Big Dummy.” I suspect you could find them taped to the forklift tractor and some to the back of the tractor driver. I do know that I helped to provide a LOT of these “signs.”