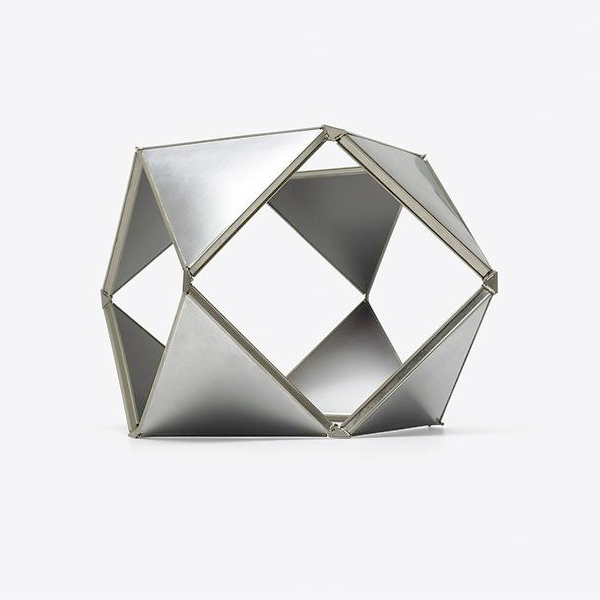 Lately, I’ve been obsessing about Buckminster Fuller’s 1976 “Jitterbug” sculptures. He made a number of “limited editions” of his kinetic Jitterbug Atom.

Sometimes you will see it called a “single cell” Jitterbug on an auction site, but I think it’s the same thing. Although, it’s hard to tell if they’re all the same size. Dimensions seem to vary, but who knows whether they’ve measured it in its smallest or largest configuration?

Fuller discovered his “Jitterbug transformation” in 1948.

Personally, I never cared much for wire-frame models. Maybe it’s my preference for packaging, but I like it much better when polyhedrons have sides.

To me, the later 1976 models are like “proof of concept” for some, as-yet-unrealized luxury presentation packaging. (See also: Geometry, Packaging & Ultraviolence)

When closed, the elegant brushed aluminum, etched copper and stainless steel models are octahedrons with 8 triangular sides. It’s easy to imagine such a shape containing something. 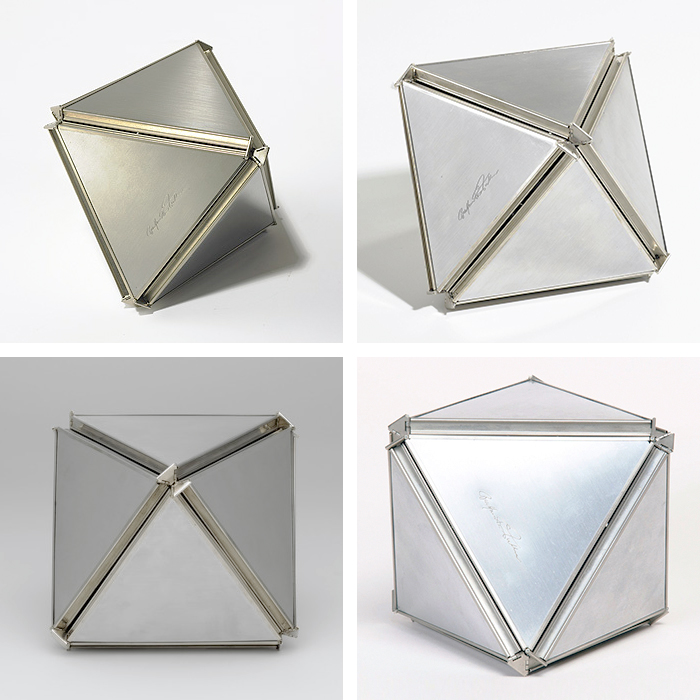 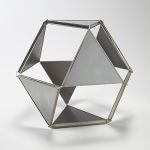 What happens when you open the Jitterbug Atom? You create 6 square openings, thereby transforming it into a cube-octahedron.

If Fuller discovered his Jitterbug transformation way back in the late forties, why did he let 28 years pass before making these 1976 models?

The early models of the jitterbug were mechanically very unstable structures, requiring a supporting armature to keep them from collapsing, until 1974 when a very special hinge joint was discovered by Dennis Dreher, who was working with Fuller at the time. This joint is called a constant dihedral hinge in the shape of a Maraldi angle (109.5 degrees) and it is what at last makes the smooth motion of the jitterbug possible. 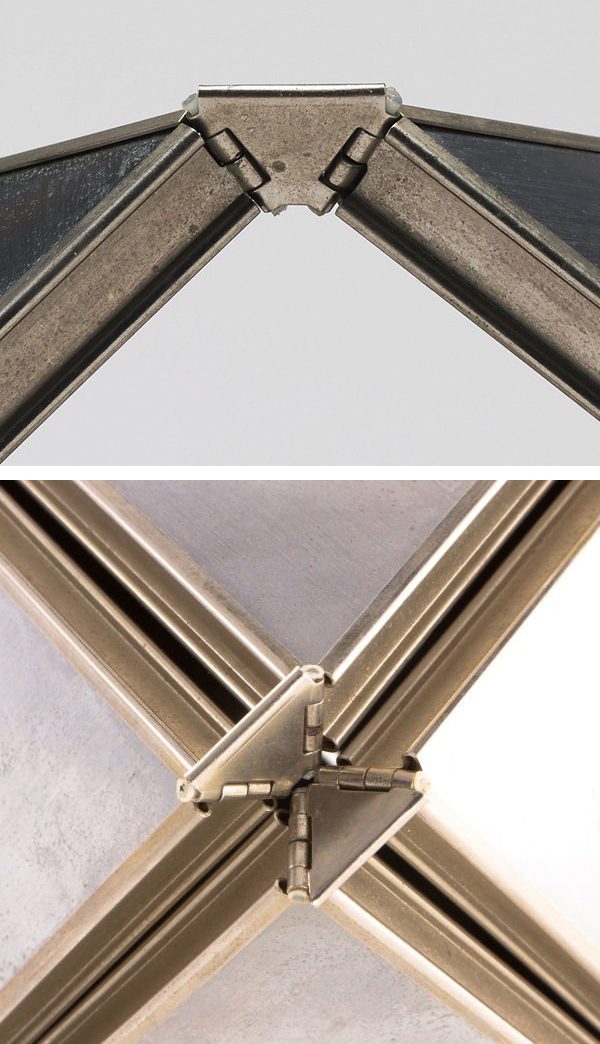 I tried to find a video of the Jitterbug Atom being put through its paces. (I failed.) You can find animations online (like the one on the right) of the Jitterbug transformation, but that’s not really the same thing. It’s not made of brushed aluminum. It’s not even an actual object.

Can someone who owns one, please make a video of their Jitterbug Atom and post it for us? (Thank you, in advance.)

The closest I could find so far are these photo progressions. 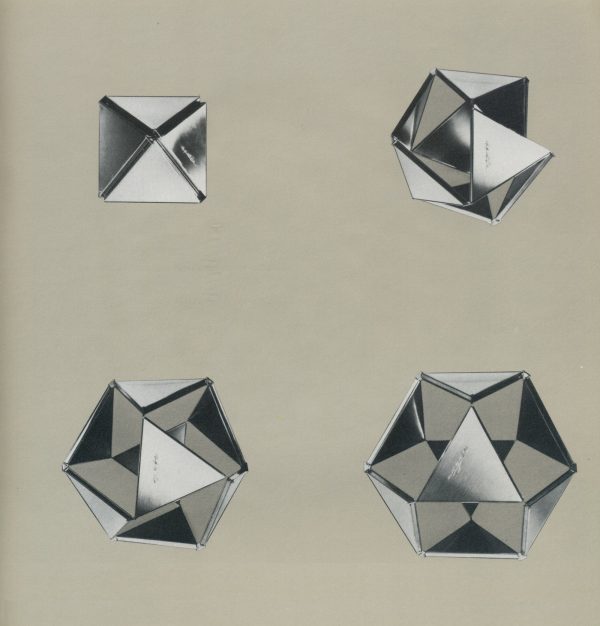 an image from the Buckminster Fuller Institute’s “Dymaxion Artifacts” online store (is it from a book cover?)

To prove its viability as a container, I found this video of a Jitterbug containing a group of tiny people.

Just kidding, of course. In this video we see average-sized people standing inside a very large transforming Jitterbug container. Organizers of the Swiss Science Expo constructed the huge Jitterbug known as the “Heureka Polyhedron” in 1991. (You can watch the entire video on YouTube.)

There were also many attempts to make the Jitterbug as a large outdoor monumental sculpture. …  The biggest jitterbug ever realized was through my initial effort and became the landmark of the Swiss science expo 1991 in Zurich. The sides had a length of 8 meter and it was moved hydraulically from three “Maraldi” hinges at the bottom. When it opened, its height doubled and the volume five-folded. After three months in operation it collapsed into the tetrahedral position, because the steel hinges and the connections to the triangles made of composite polyester were not well enough engineered.

(Which raises the question: were any people trapped inside the container?)

I like the idea that the Jitterbug, like an atom, is something you can use to build something bigger.

Since octahedrons and cube-octahedrons are both “space-filling,” Fuller thought that an array of connected Jitterbugs might be able to transform in the same way. 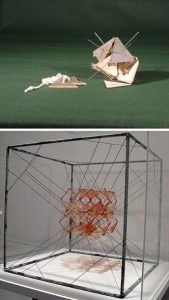 Using models (like the ones on the left) he was able to prove this, but these models are not so elegant as objects.

In addition to the 1976 Jitterbug Atom(s), Fuller also made a number of sculptures featuring a larger array of atoms. He named these sculptures “Complex of Jitterbugs” and two of them are shown below.

I don’t think they’re as nice as the single-cell Jitterbug Atom. Although Dennis Dreher’s “constant dihedral hinges” eliminated the need for the wires and armature, Fuller erected these “complexes” of Jitterbugs on pedestal poles that look like mic stands.

Still, I’d love to see a video of one in motion.

Complex of Jitterbugs — on left: via Tias ; on right: via: Fundación Banco Santander, Grażyna Kulczyk Collection

More recently, Dreher has been promoting a Jitterbug kit called the Octabug which enables you to construct your own “complex of jitterbugs” with no need for a mic stand.