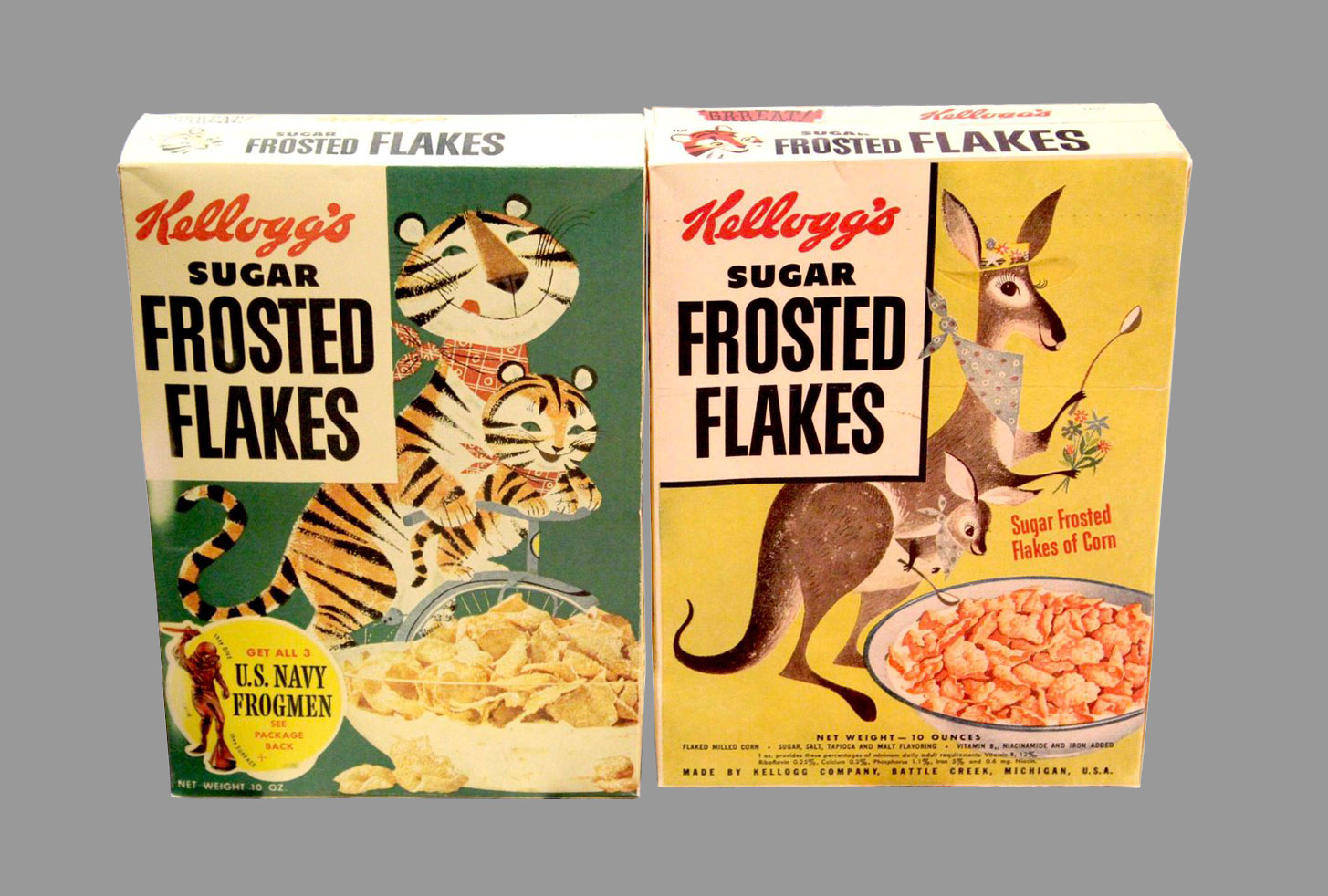 When Leo Burnett’s ad agency began creating a menagerie of product mascots, some started calling it “the critter agency.” And yet, of all the “critters” that the agency launched, Tony the Tiger probably stands apart. (First on four legs, and then just two.)

Originally called “Tony the talking tiger,” Tony was by no means the only critter developed for Sugar Frosted Flakes. The company also developed at least five other animal characters. 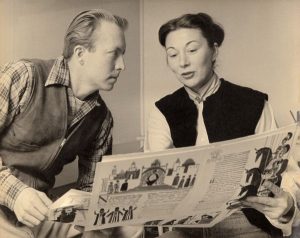 Tony first appeared in 1952, but even the Provensens’ daughter is not sure if he was created solely by her father or as a joint effort between both of her parents.

We don’t mean to re-litigate any of that. We’ll just acknowledge that the tiger character’s name, concept and some preliminary artwork were already in place before Provensen(s) ever got involved. And that one or more Provensens created the final, finished illustrations.

What’s undeniable, however, is that Alice and Martin Provensen did make a number of animal character illustrations for the Kellogg Company.

Supposedly Kellogg’s goal was to have a character for every letter of the alphabet, but only Tony and Katie [sic] ever made it onto the box.

Some claim that Kellogg’s held a contest, letting consumers pick the mascot. Kellogg’s Australian website actually says so, but I can find no evidence to support this. The company did create a split run of packaging: some with Tony the Tiger, some with Katy the Kangaroo. And both of those characters appear in some television commercials. But the Provensens also made illustrations of 5 other Sugar Frosted Flakes animals.

Including: Newt the Gnu, Elmo the Elephant, George the Giraffe, Zeke the Zebra and Pete the Porcupine.

If you hunt around the Internet, you’ll probably find the odd picture of Tony’s old friend, Katy the Kangaroo. But what ever became of all the other Provensen critters from that early “Kellogg’s Zoo” is a mystery. They seem to have… disappeared. 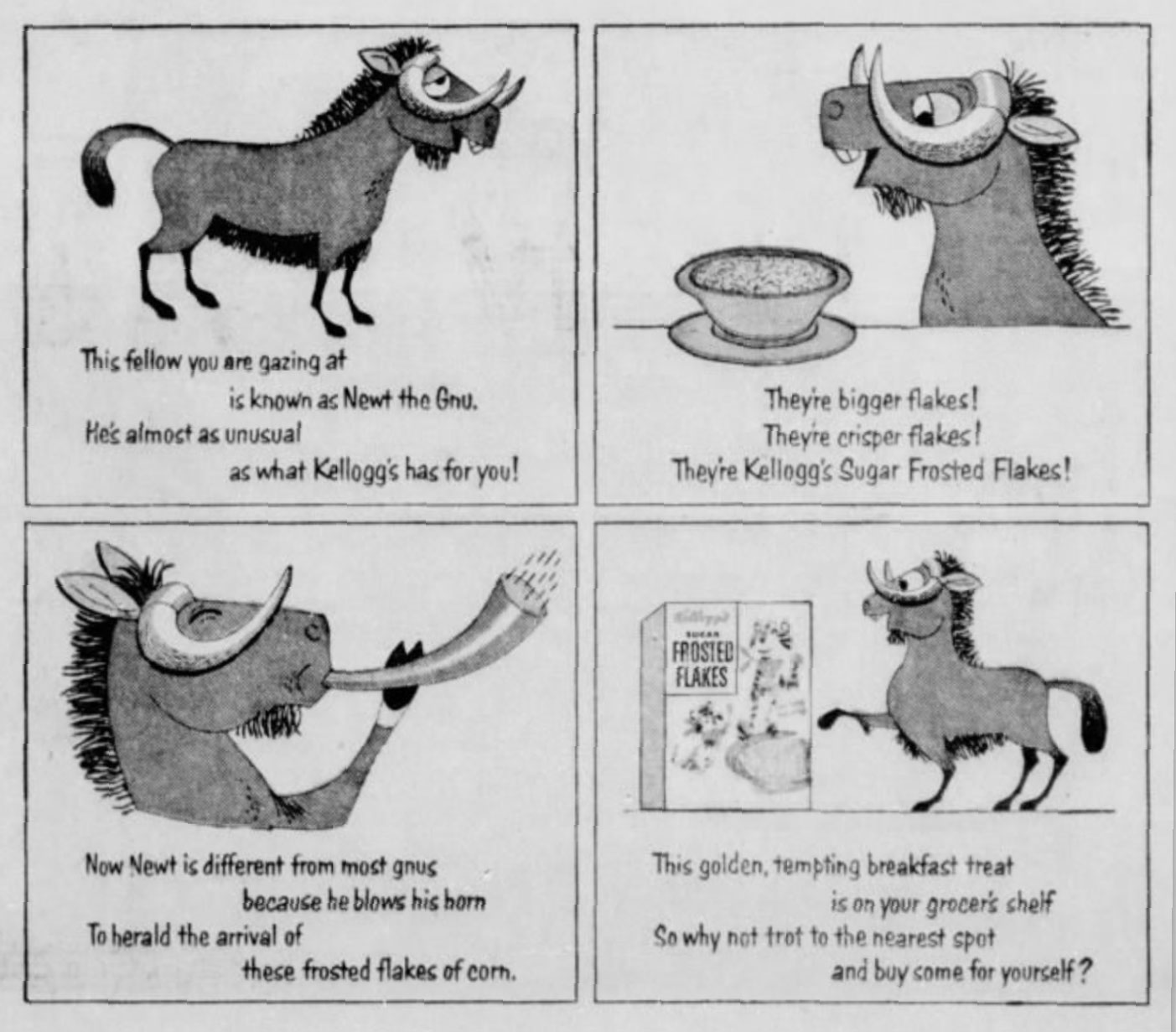 I’ve read that the only Provensen characters to appear on any Frosted Flakes boxes were Tony the Tiger and Katy the Kangaroo. And I’ve found no contradictory evidence to suggest otherwise.

I did, however, discover that a Sugar Frosted Flakes ad with Newt the Gnu appeared in multiple newspapers. (Originally printed in the color comics section) Showing that he, at least, was one critter who did not entirely “disappear.” 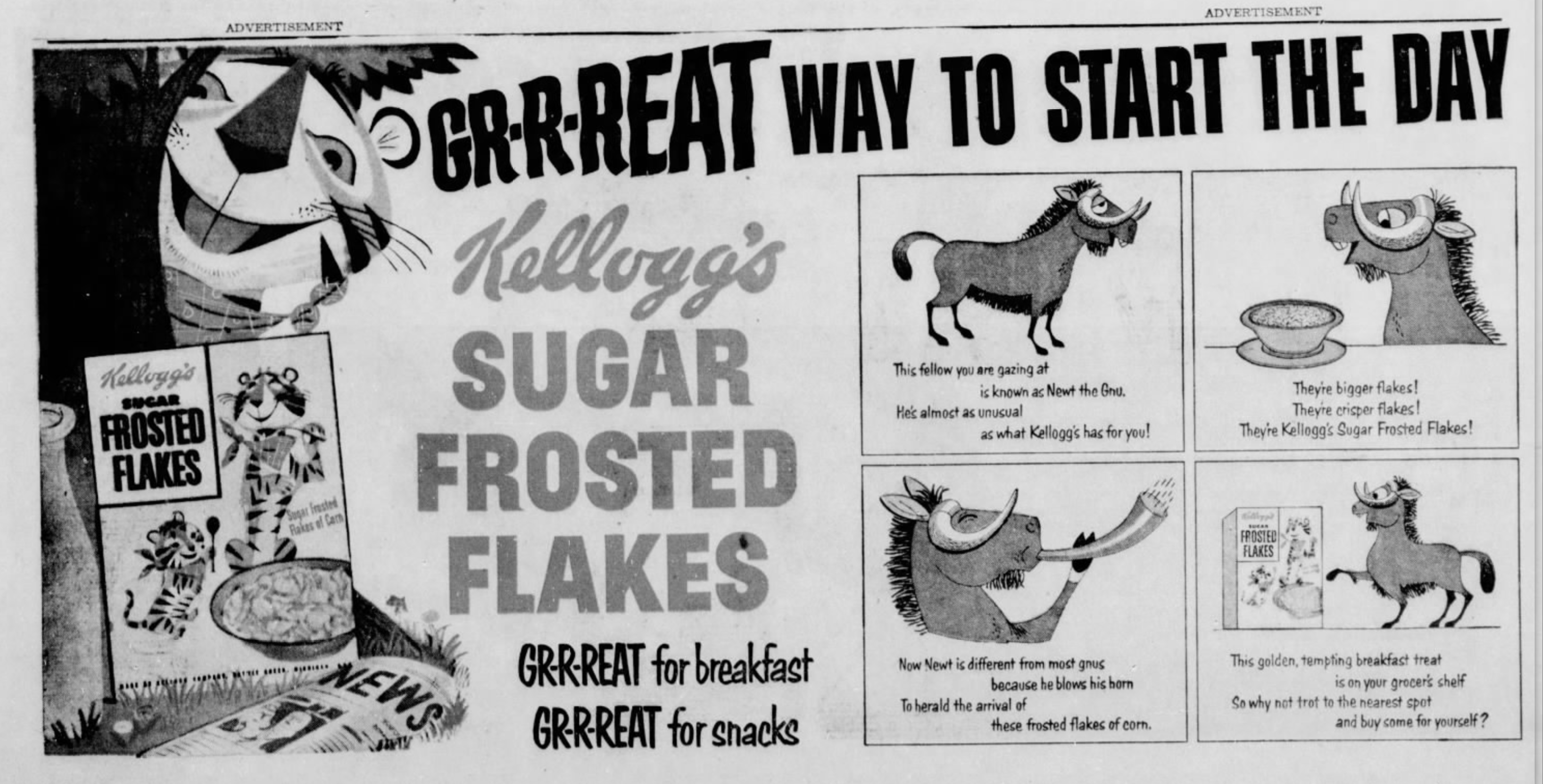 In a similar vein to Burnett’s “settles all differences” campaign, the writers wrote rhyming advertising copy for each of the proposed Sugar Frosted Flakes mascots.

The Kellogg Company asked its ad agency, Chicago-based Leo Burnett, to come up with some appealing animals to pitch a new cereal called Sugar Sugar Frosted Flakes. Jack Baxter, the creative director for the Kellogg account, Jack Tolzein, an art director, and John Matthews, a copywriter, took on the assignment and suggested four animals: a kangaroo, an elephant, a gnu and a tiger.

After commissioning the first renditions of the characters from free-lance Chicago artist Phoebe Moore, Burnett television producer Don Tennant began writing the television commercials. “I named them all,” says Tennant, “I named them Tony the Tiger and Katy the Kangaroo and Newt the Gnu and Elmo the Elephant.” Jack Baxter and John Matthews then wrote a newspaper comic strip jingle for each critter. 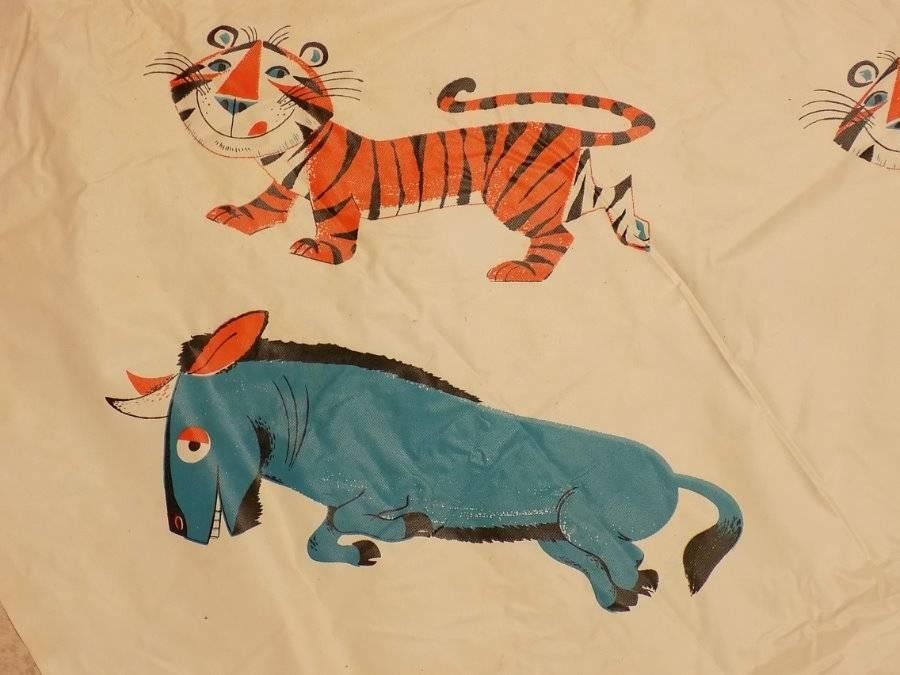 Ok, Newt the Gnu and (and all of the other missing animals) have been hiding in plain sight along with Tony the Tiger and Katy the Kangaroo. They all (re)appeared on a 1954 promotional “Circus Tablecloth.” 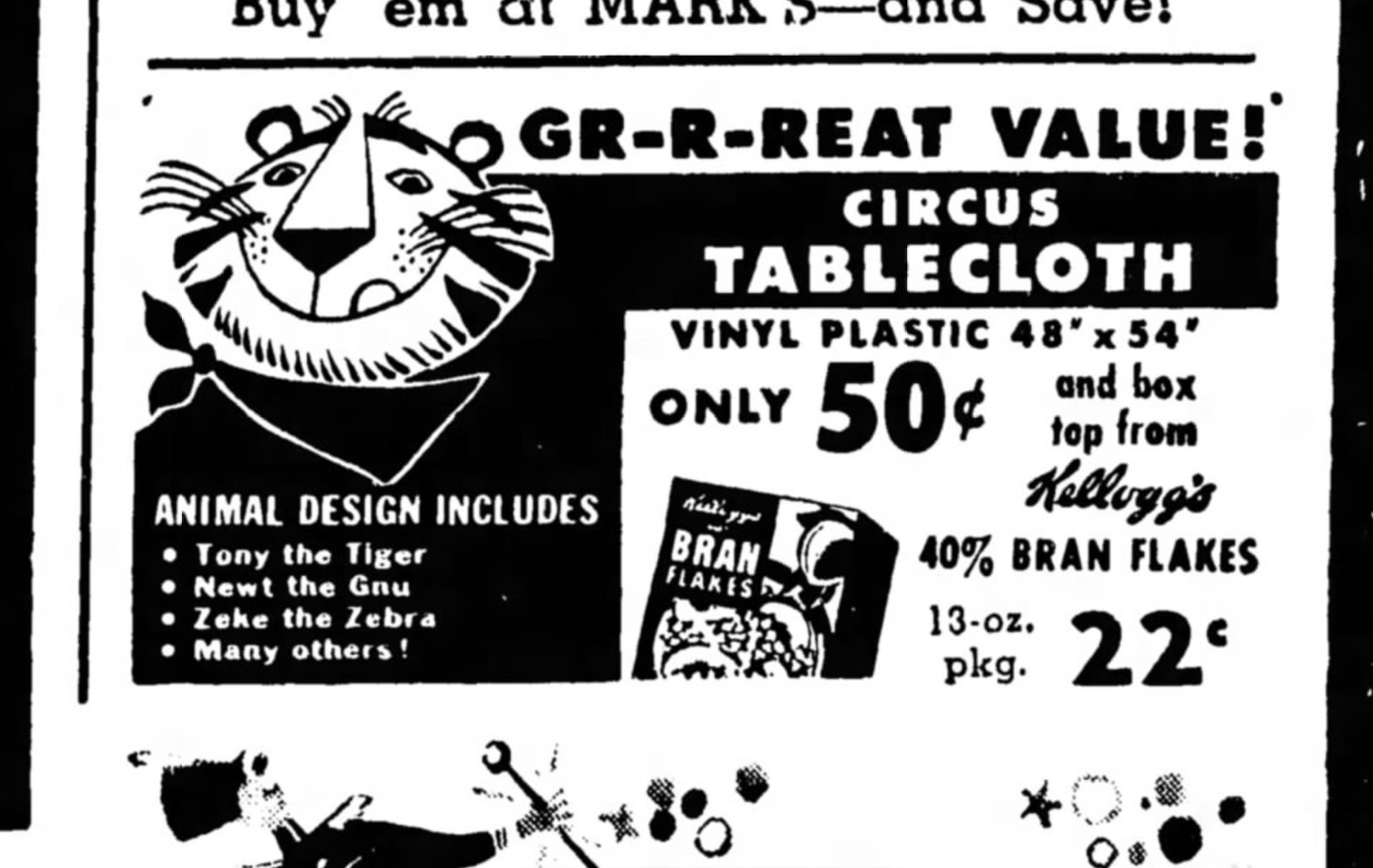 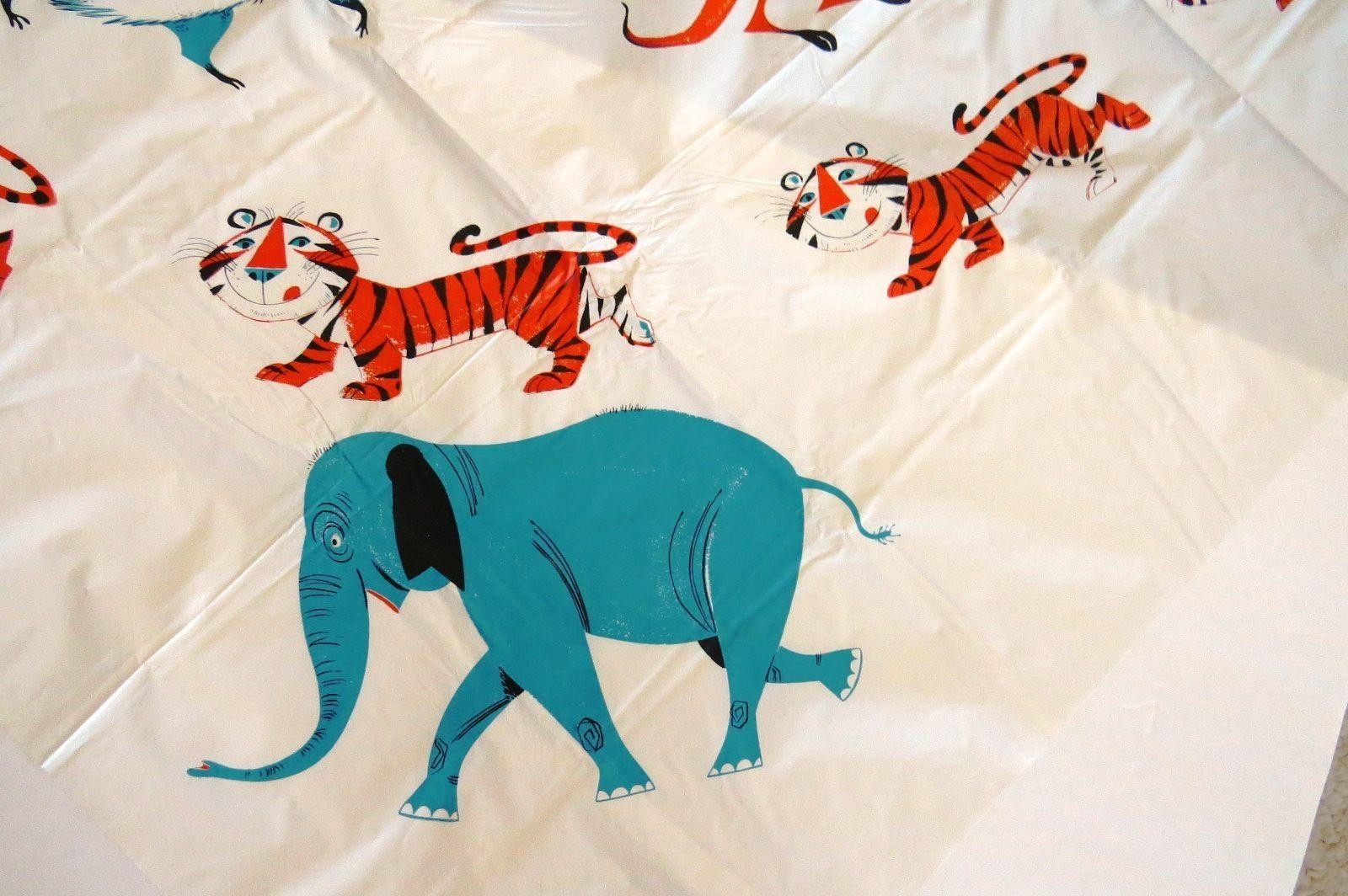 I’d noticed that the list of animals, cited as being in the running, was quite fungible. Don Tennant, for example (in the quotation above) cites only: Tony the Tiger, Katy the Kangaroo, Newt the Gnu and Elmo the Elephant. 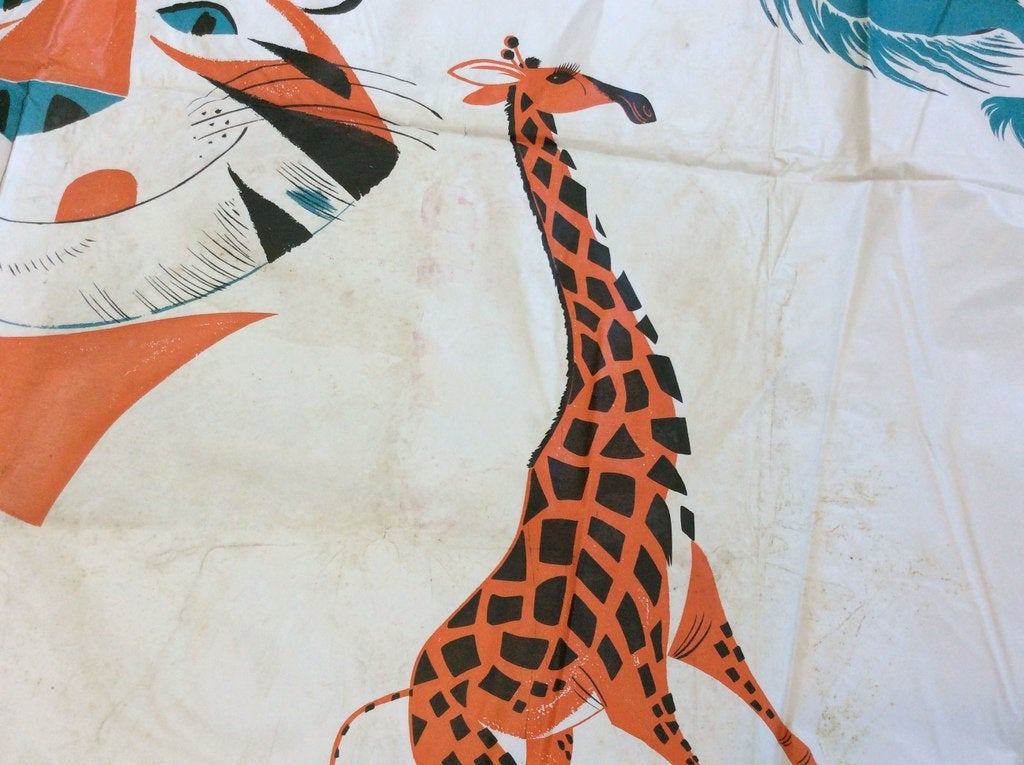 The book quoted below, on the other hand, omits Elmo the Elephant and instead mentions George the Giraffe.

Drawn by Martin Provinsen [sic], an illustrator of children’s books, Katy the Kangaroo, Newt the Gnu and George the Giraffe are led by Tony the Tiger®.

Stéphane Pincas and Marc Loiseau
A History of Advertising, 2008 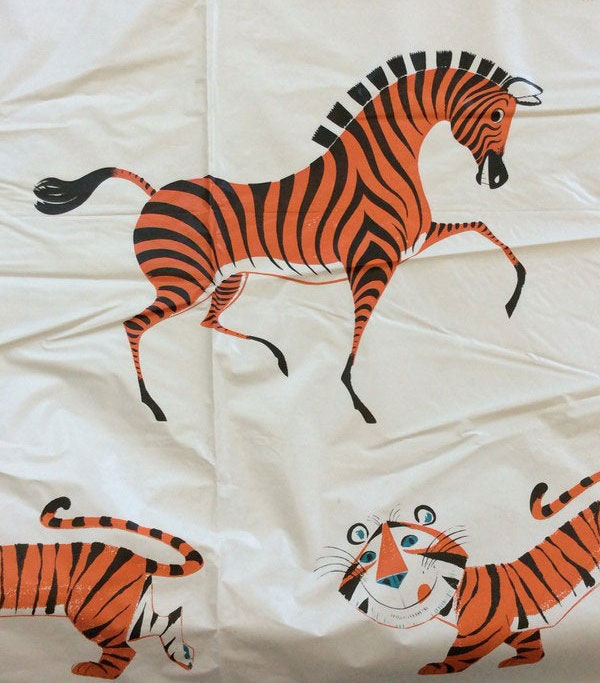 “Zeke” was the only 2nd tier critter mentioned in the short piece below.

Tony the Tiger in ads and on cereal box is part of Kellogg’s zoo. There’s also Katy the Kangaroo and Zeke the Zebra — all for the same cereal. Ad will also be used in a special mailing campaign. Andy Armstrong was AD, Schreiner and Bennett did the bowl, and Alice and Martin Provenson[sic], Kapes Studios, Chicago, did the tiger and the other animals.

(They were talking specifically about this 1952 ad for Life Magazine…) 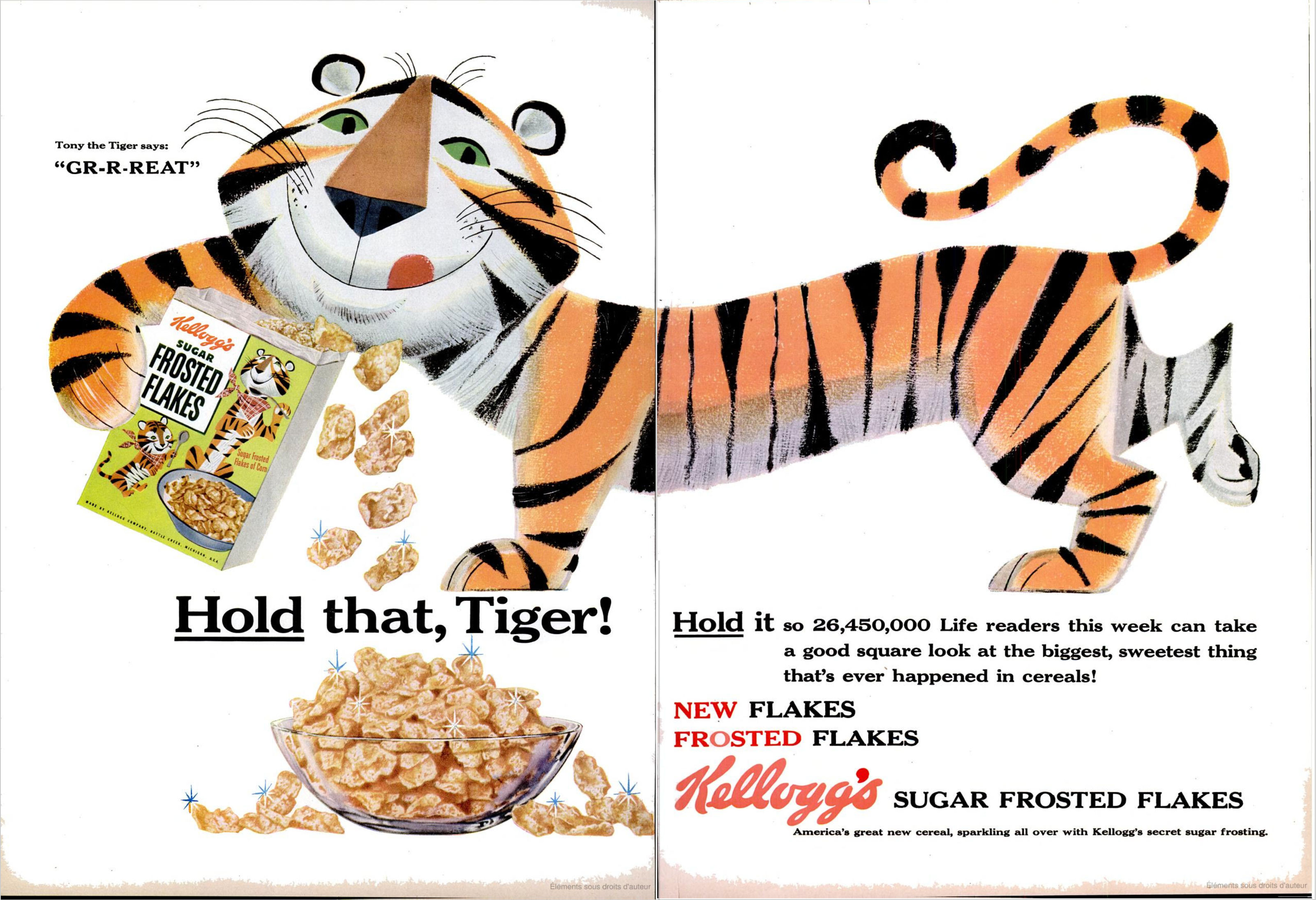 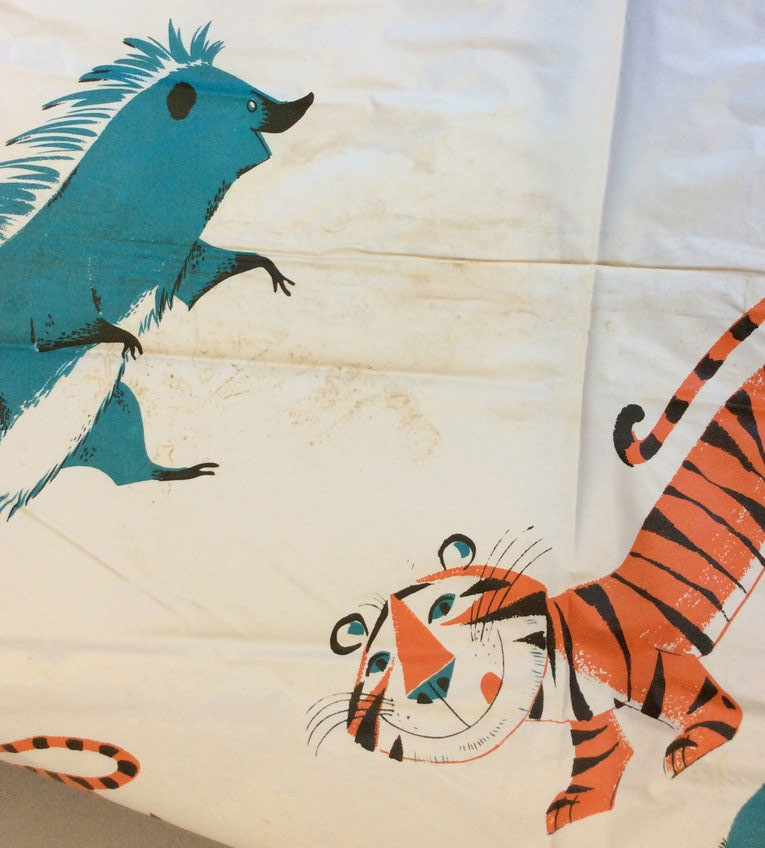 Not much has been written about Pete the porcupine. I saw the name being used by some of the Etsy stores selling the tablecloth. But I couldn’t immediately confirm whether Pete was really the character’s official name. Not until I noticed that Kellogg’s had included a whole list of names with their offer on the back of this Shredded Wheat box. 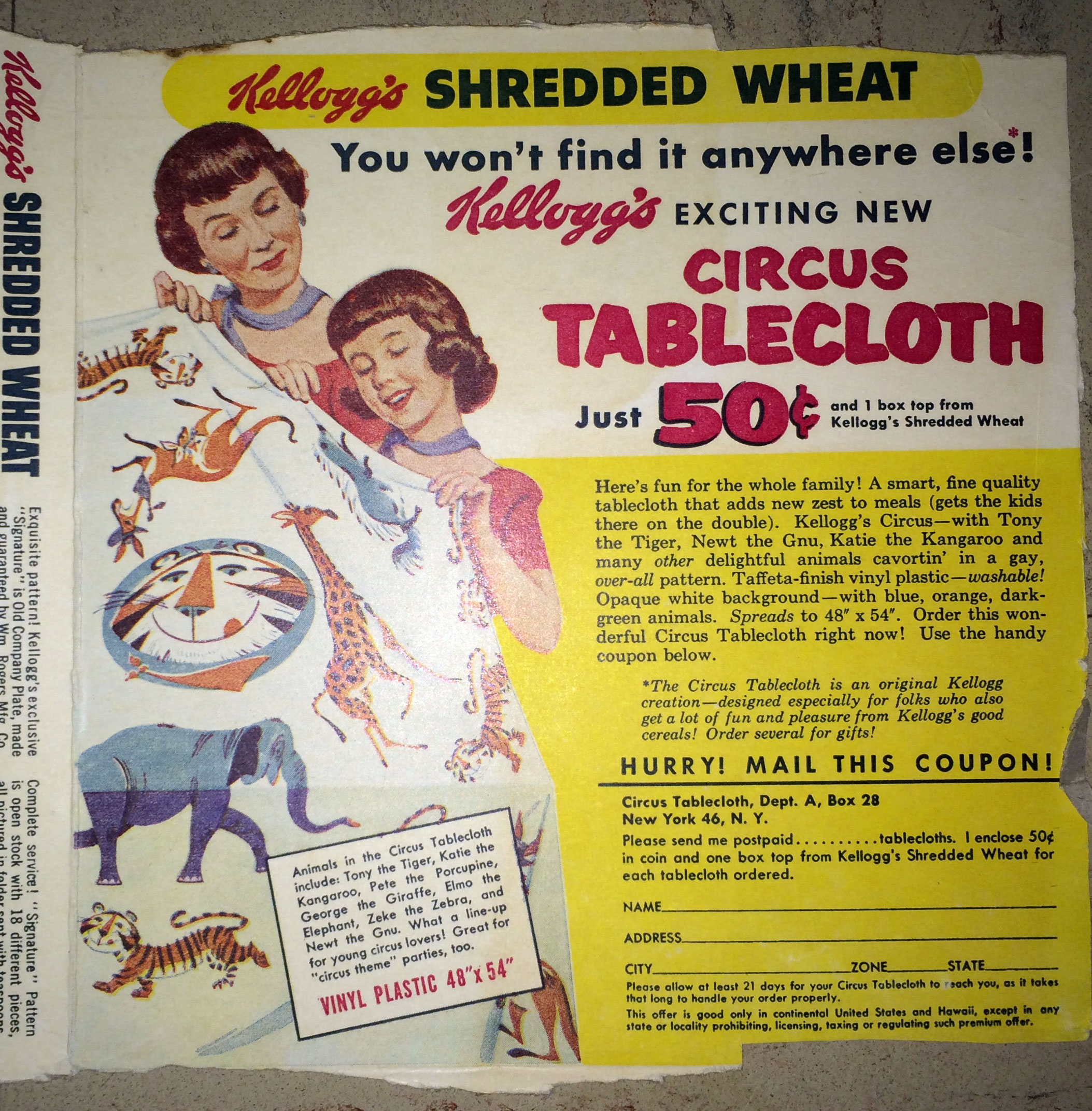 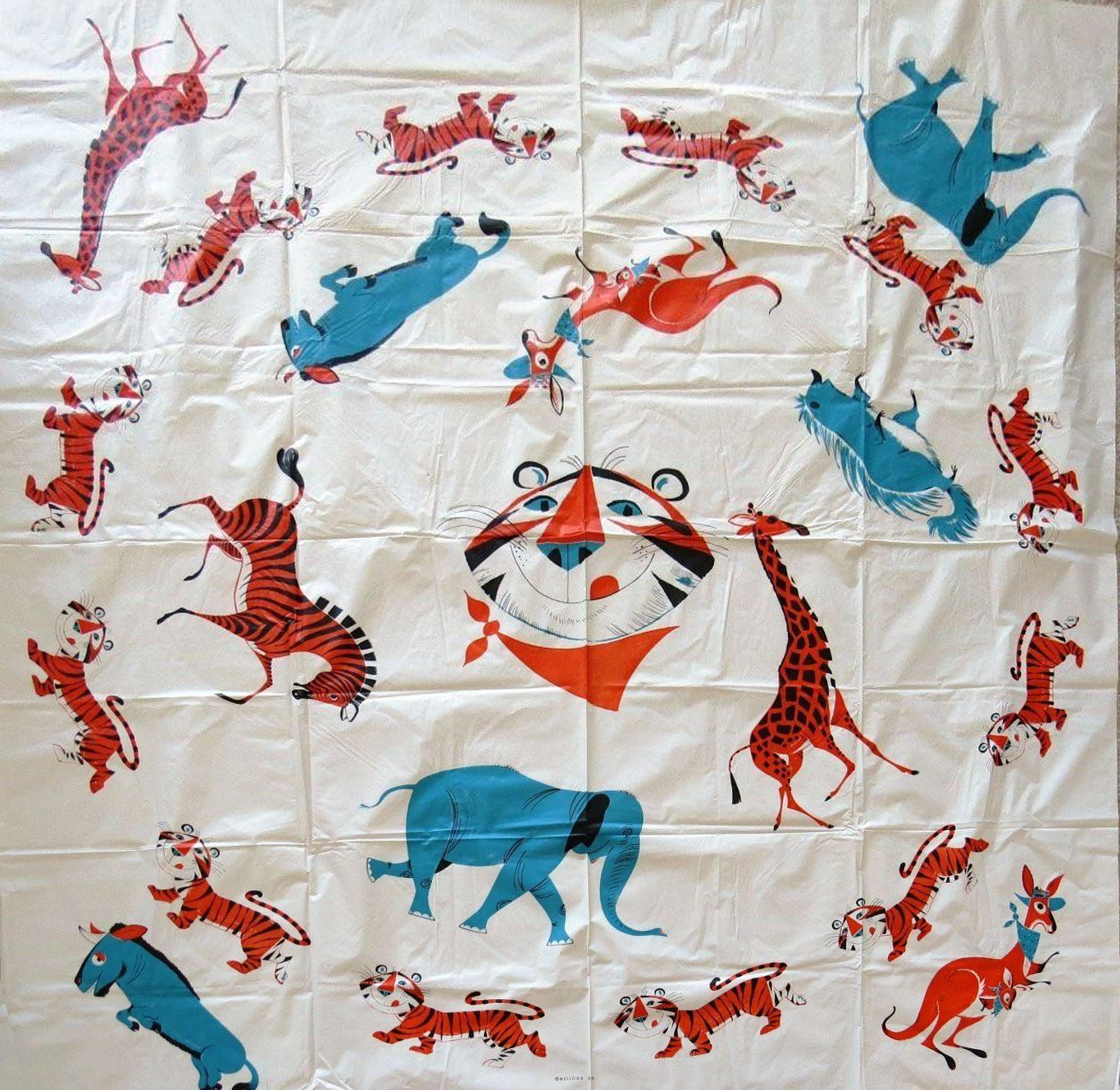 Here’s the Provensen-Frosted-Flakes-Zoo / “Circus Tablecloth” in its entirety. (I currently see it for sale on 3 Etsy stores: unclebunkstrunk, The31Collection and indiatrade.)

And last, but not least, we might as well include the two more-well-known critters in our round up… 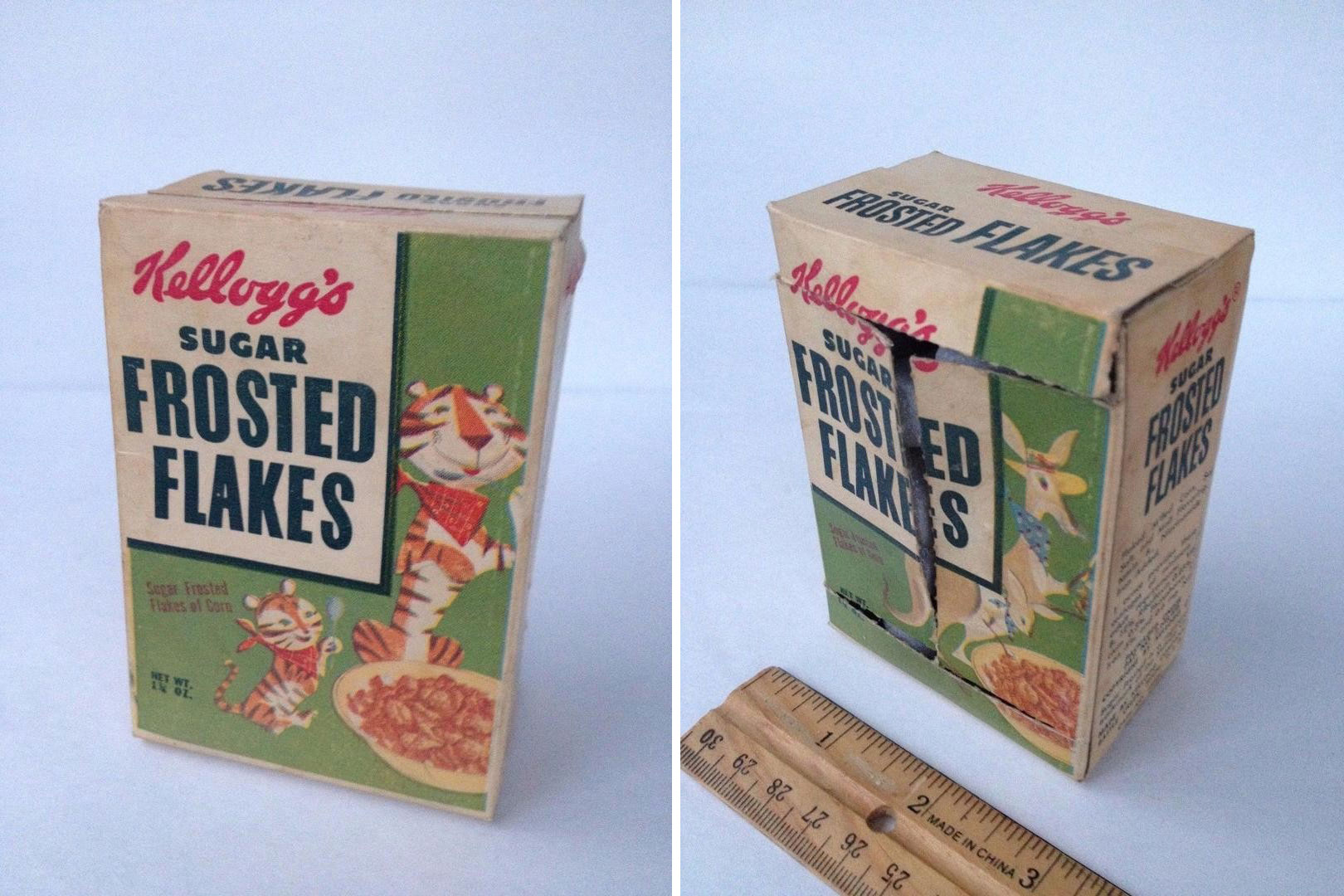 This Sugar Frosted Flakes “SnackPak” box features Tony the Tiger on one side and Katy the Kangaroo on the other.

Kellogg’s used Katy the Kangaroo in commercials and newspaper advertising and registered her as a trademark. 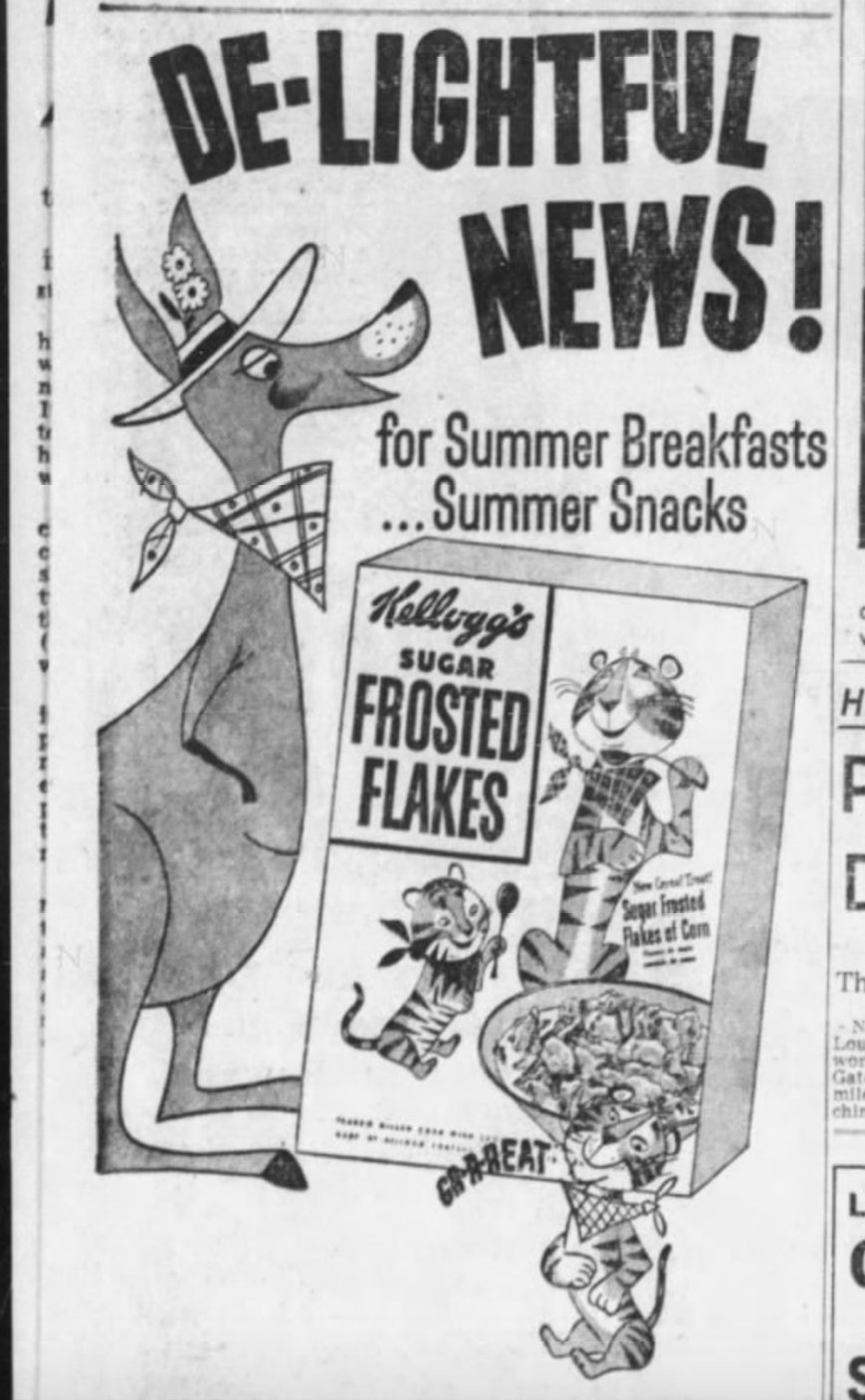 Katy the Kangaroo promoting the Tony the Tiger box in 1953 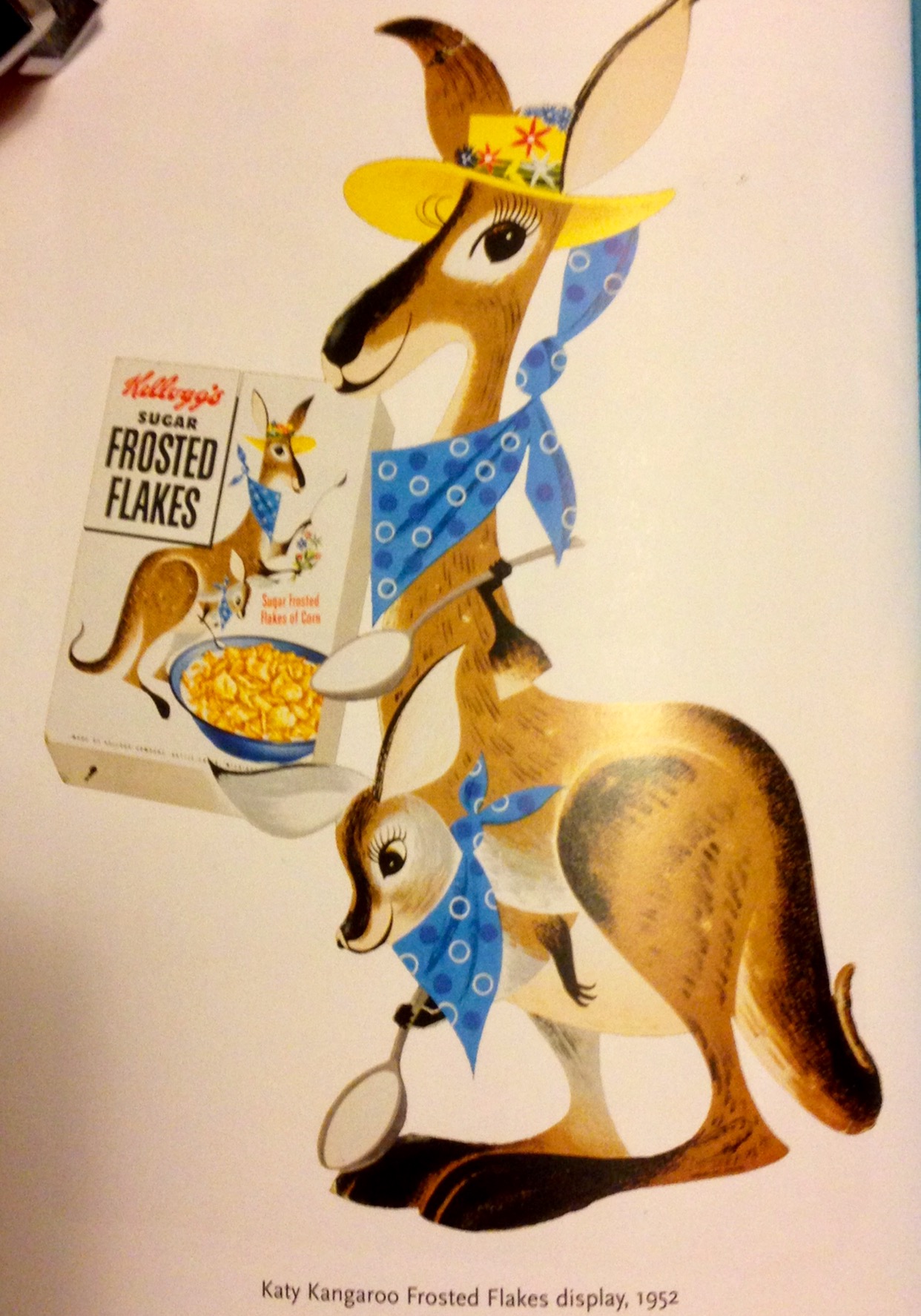 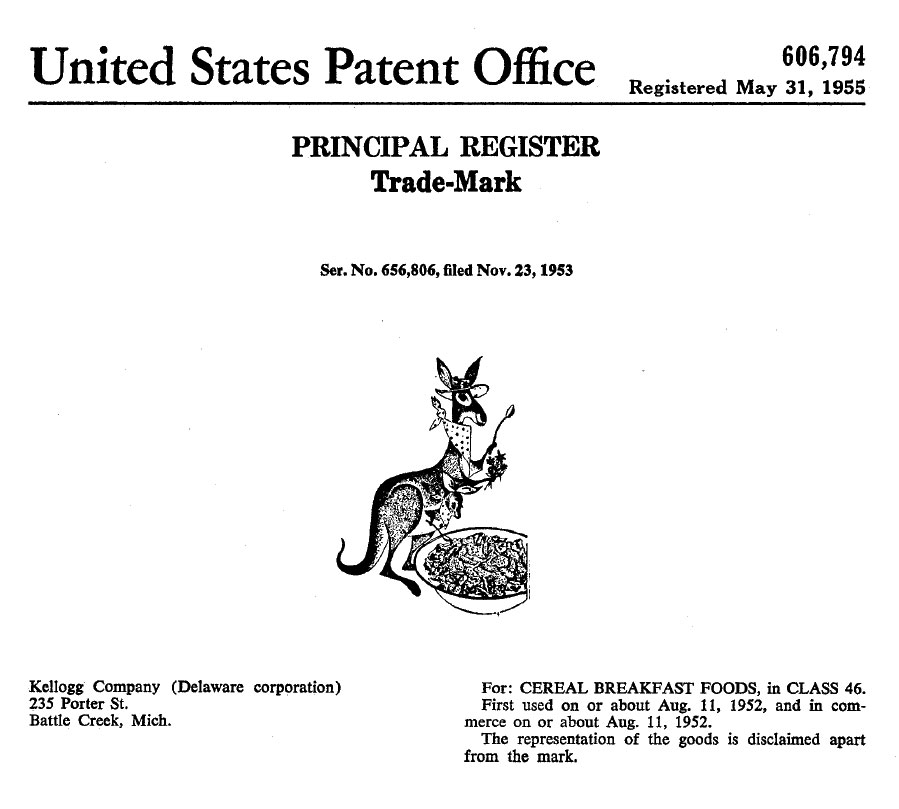 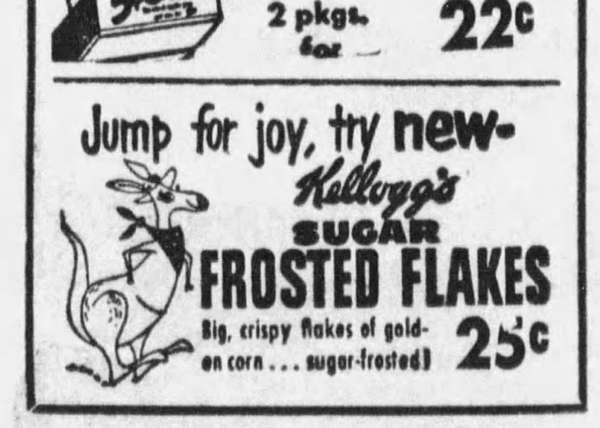 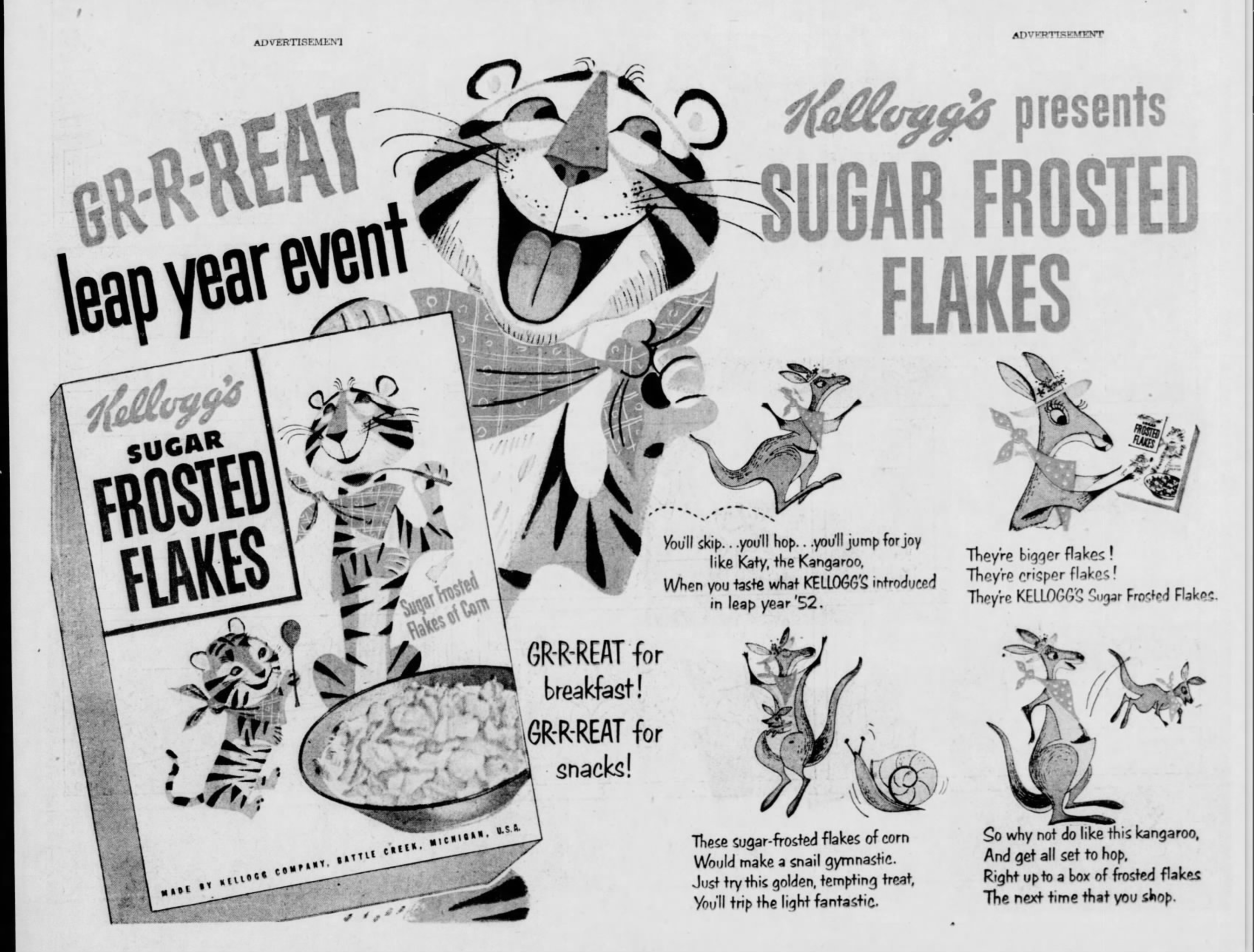 The Katy the Kangaroo packaging was also featured in these two cross-promotional Superman spots:

As with Katy, Kellogg’s also used Tony the Tiger in commercials and newspaper advertising and registered him as a trademark. (But, I guess I’m stating the obvious, here!) 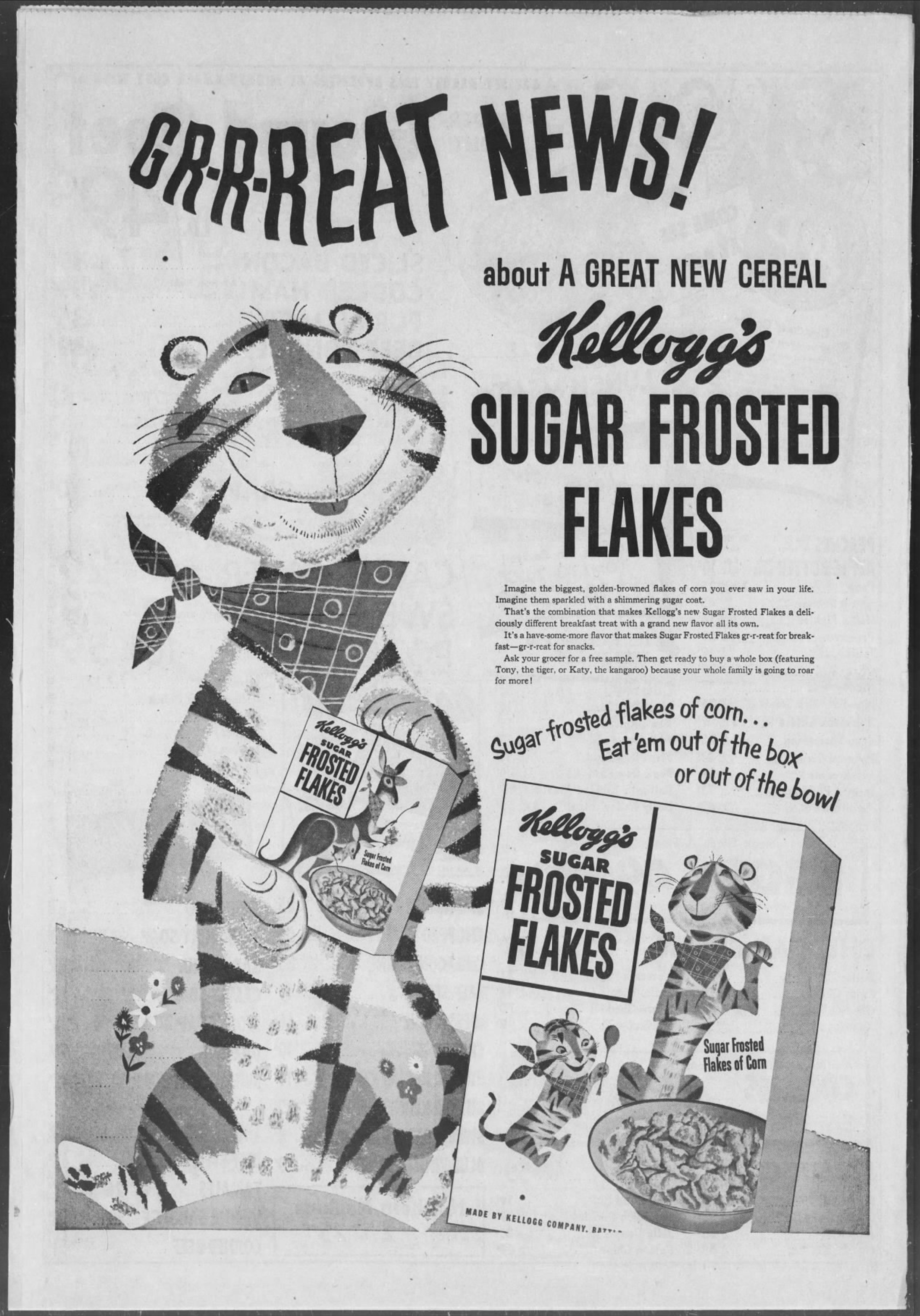 Tony the Tiger promoting the Katy the Kangaroo box in 1952 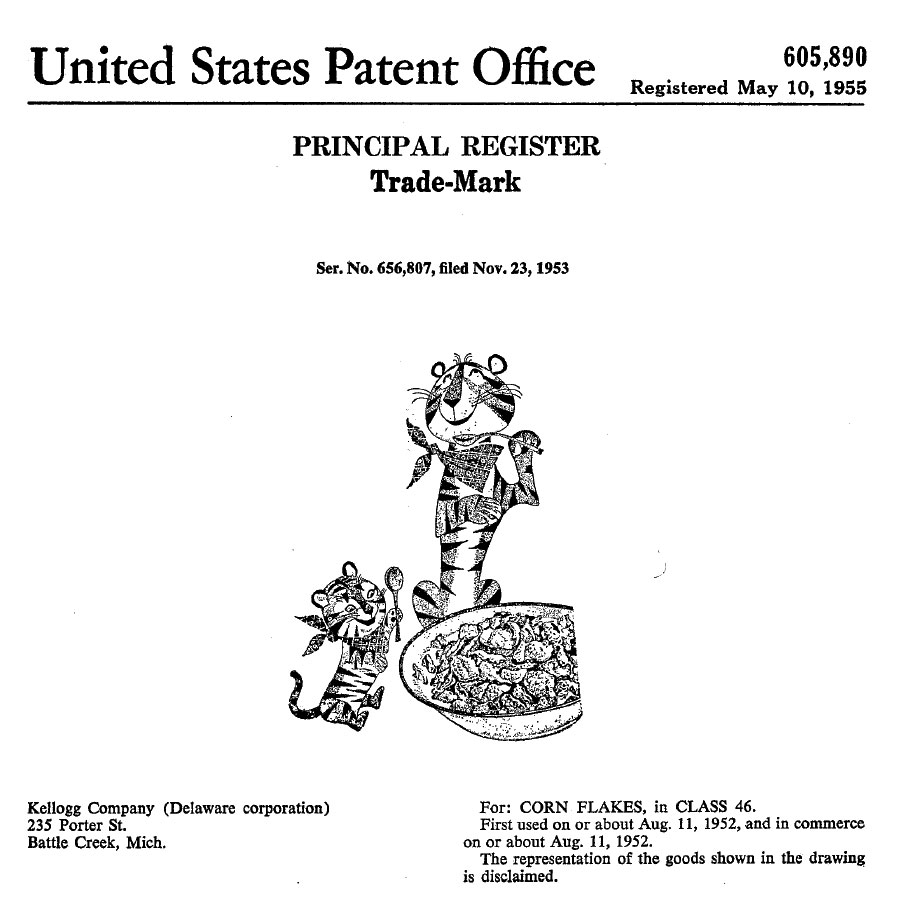 So, there you have it: all 7 of the “critters” in the The Provensen/Kellogg’s Zoo!

I tried, but never found any actual proof of the “contest” that Kellogg’s supposedly ran to choose the official Sugar Frosted Flakes mascot.

I did, however, find this reference to a small children’s focus group:

Just a little note from Alice and Martin’s nephew… I, and my little brother in the early 50s were part of a childrens group brought together to assess which characters we liked best. Tony and Katie were the winners.  –Erik Provensen