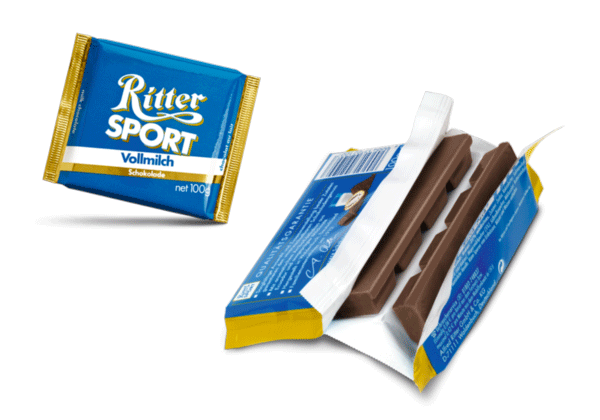 Got an email last week from our friend

The “sporty” part is that you can snap the package open.  The motto (printed on every package) is “Quadratisch. Praktisch. Gut.” (Square. Practical. Good.)

I once made fun of this to my German friends, who immediately came to Ritter’s defense: “It’s a progressive company.”  “The product is excellent.”  Etc.

I like “practical” as a product claim. (Reminds me of the early Marlboro Cigarettes claim that their flip-top box was “interesting and practical.”)

The official English version of the Ritter Sport motto, however, is not the literal translation. Their English language packaging offers instead, “Quality. Chocolate. Squared.” (Which, I suppose, could be expressed algebraically as: Quality + Chocolate2 = RS)

Miller also points out that “Somehow, eating chocolates seems to be the opposite of sports.”

It’s true that Ritter Sport’s advertising has long sought to associate itself with sports, often by implying that an infusion of chocolate will give the consumer greater athletic ability. It turns out, however, that Ritter’s chocolate was originally named “sport” because the square chocolate bar would fit into the pocket of one’s sport jacket.

Much more about Ritter Sport’s branding and their Knick-Pack, after the fold…

1976
The invention of the knick-pack

“The pack with the snap that’s the packet in the pocket”: The invention of the specially sealed wrapper with the revolutionary snap-open pack completely sets RITTER SPORT apart from traditional chocolate bars and quickly develops into a characterising feature of the brand.

The opening of the bag at the back seam is associated with some difficulties. Although it is a refinement of the tubular bag as so-called “knick pack” is known in which the still wrapped chocolate bar can be broken by a bending movement and in which case the rear back seam. However, this assumes that the chocolate bar for such a controlled fracture process is sufficiently hard. At higher temperatures, the chocolate is so soft that buckling of the back seam is difficult or impossible possible.

Opening the packaging at the back seam is however difficult. A configuration of the tubular bag packaging as a so-called “pack with a snap” or “snap-open pack” is known in which the still packaged chocolate bar by snapping is broken apart and at the same time the back seam is pulled open. However, this requires that the chocolate bar is sufficiently hard for such a targeted breaking action. At higher temperatures, however, the chocolate becomes so soft that breaking of  the back seam is not possible or possible only with difficulty. Moreover, this snap-open possibility is not always recognized by the consumer so that the consumer attempts to tear open the back seam of the packaging. However, such a tearing action has the result that the ripped-open film or foil will continue to tear in an uncontrolled fashion. Reuse of the open packaging for storing the unconsumed quantities of the package contents is therefore not possible or only possible to a limited extent.

Some additional advertising from the Ritter Sport archives…

The assertion of Miller’s German friends that Ritter Sport is “a progressive company,” is exactly the kind of brand loyalty that most brand managers can only dream of. Clearly they have been doing something right.

About their packaging, the Ritter Sport blog has this to say:

For the experts among you: Already in 1991, RITTER SPORT opted for the plastic packaging. This so-called single-material consists of fully-recyclable polypropylene. For comparison — the hitherto conventional long board packages usually consisted of combinations of materials such as aluminum with paper or cardboard. Our colorful films are also free of plasticizers such as bisphenol A and phthalates. We also do not work in this respect internally on the legal requirements, according to its own strict rules and do not forget of course the issue of sustainability.

The colorful, finished printed packaging films arrive on large roles in our production. Here they are formed in the packaging machine to form a tube around the cooled chocolate bars. Hence the name “flow wrapping.” Faster than you can look, the film tube closes around the chocolate square, the film is sealed and cut. A machine manages a minute to pack 380 chocolate bars — clearly faster than by hand! Delicious chocolate wrapped in colorful foil — and the final product is ready…

Our practical knick-pack is opened by simply bending the packaging, without cumbersome to pluck at the film and to get their hands “dirty.”  The chocolate square must be folded on the lower rib. The knick-pack is a real unique selling point of RITTER SPORT chocolate.

Sidebar:  While the idea behind the favicon on the Ritter Sport Chocolate website is that the tiny symbol resembles one of their square chocolate bars, do you know what it resembles even more? 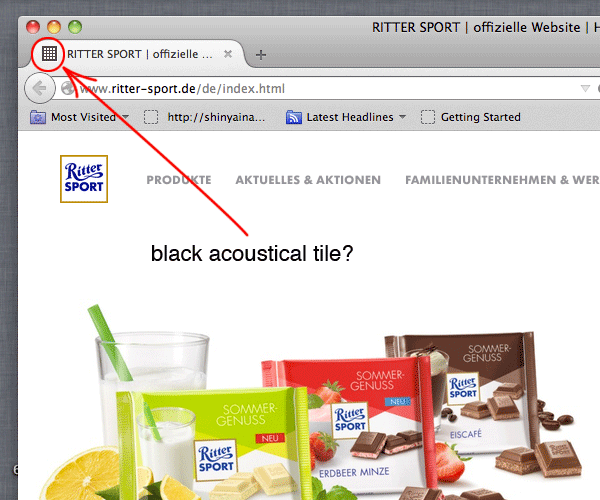