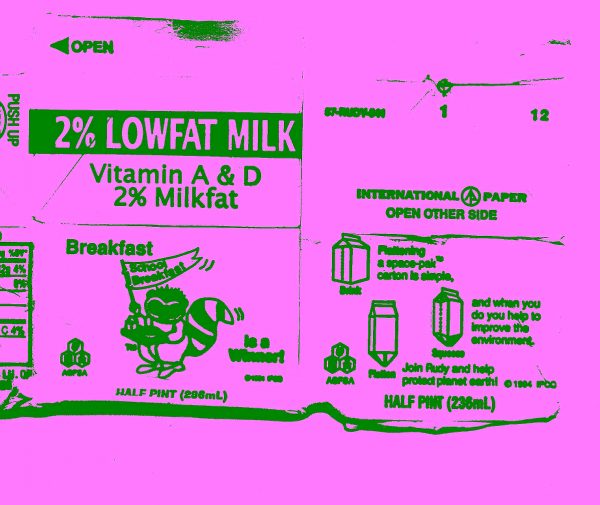 For day 4 of “Polyhedral Milk Carton Week” we promised to bring you evidence of International Paper‘s collapsible milk carton.

I was hoping to find some decent photos of their Space-Pak™ carton showing its side panel score lines. But the best I’ve been able to come up with is the magenta “specimen” (above) from their 1995 trademark filing.

The company touted its collapsible design as a way of making milk cartons more practical to recycle.

Because environmental concerns are critical to our customers, our liquid packaging division has responded with creative solutions. One example is Space-Pak, a half-pint milk carton used widely in schools. It flattens when pressed along scores on two sides, reducing volume and taking less space in landfills.

Is it true what they wrote? (“used widely in schools”?) I’ve looked for evidence of this and found hardly any.

Space-Pak™ did, however, make a brief splash in 1993 when some public schools in Connecticut tried it out… 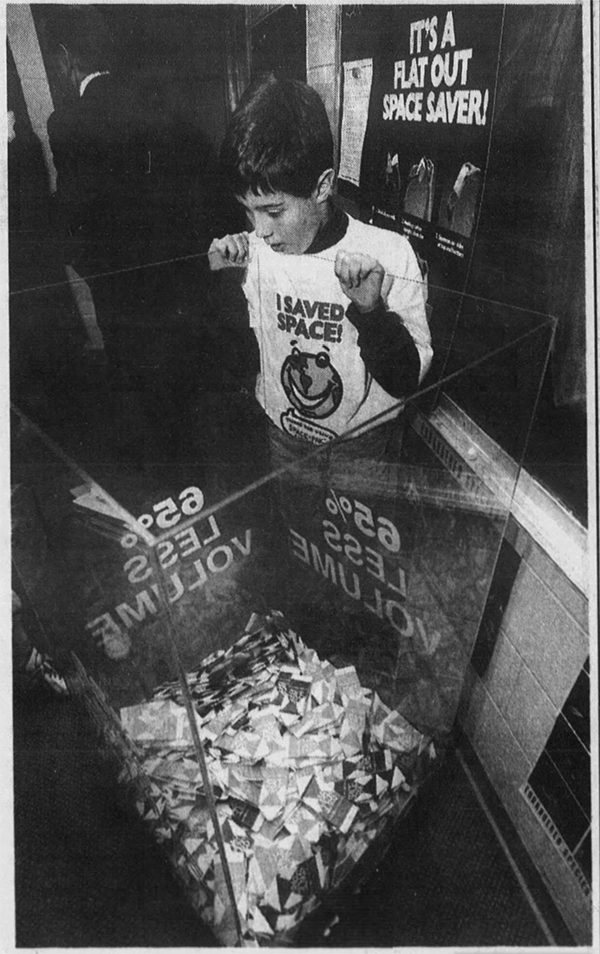 “Jeffrey Tedford, 11, looks at how much space is saved by using the “Space-Pak” collapsible milk cartons…”

On Tuesday paper company officials showed up to begin training teachers in the proper method of crushing the new milk cartons. The teachers, in turn, taught six-graders the smashing skill, as opposed to the traditional stomping method. …

As part of the demonstration project, Coventry pupils also got to star in a music video and a rap song that will be used to teach children around the nation how to put the squeeze on.

Naturally, I looked for that “music video” mentioned above. Surely I would find some clear footage there of these collapsible milk cartons in action. But I found no further mentions of the International Paper rap song. 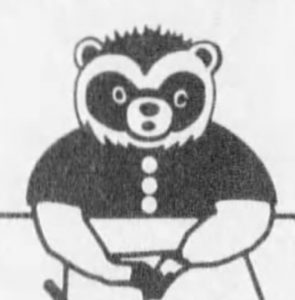 It’s interesting that someone at International Paper thought of using a rap video to make the Space-Pak milk carton cooler to kids in school.

You may have noticed the “Rudy Raccoon” character printed on the specimen Space-Pak carton. On that carton, at the end of the “flattening” instructions, they printed: “Join Rudy and Protect Planet Earth!”

Rudy Raccoon™, a character who really “gets around,” is a friendly cartoon animal who has come to personify nutritious school meals during the past two years. Developed by the American School Food Service Association (ASFSA) and International Paper, a leading supplier of liquid packaging products, the Rudy Raccoon program appears on the sides of half-pint (and other size) milk cartons that are an integral part of healthful school meals.

It’s funny because “Rudy” was later deemed not-cool-enough for school.

Rudy was meant to appear on milk cartons sold in school cafeterias. He was cute and all, but he was unconnected to anything besides the packaging he appeared on. “If you’re going to try to influence kids to exercise or drink more milk, or read, or all those positive things,” [Richard] Long says, “you should really be using properties that they actually relate to.”

Long focused on a new venture, called Milk Media, devoted to that proposition. As the Milk Media Web site puts it, “We introduced the concept of branded cartons to forge relationships between sponsors who had characters that kids really cared about as a more effective tactic to make milk ‘Cool for Kids.’ 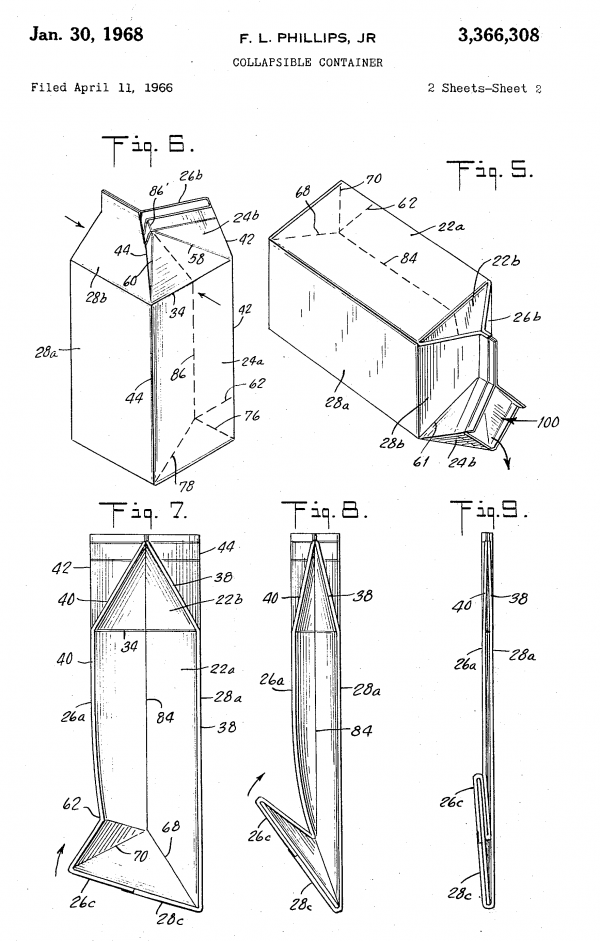 As to the structure of the short-lived Space-Pak milk carton, International Paper does not appear to have ever held a patent for it. This might be because of the earlier 1968 patent by package designer, Floyd L. Phillips, Jr. (shown above)

Still, a lot of of other package designers have patented slightly different versions of the same idea. (Over the years and as recently as 2017.) 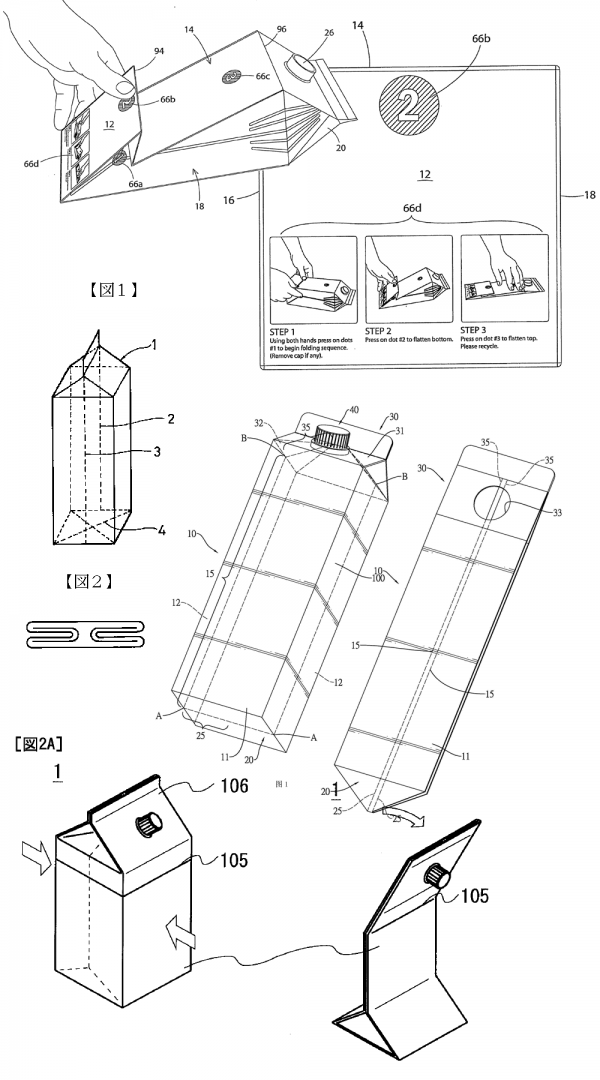 All of this creative energy inventing collapsible milk cartons maybe misses the point: