The Sweden-based Tetra-Pak company, founded by Ruben Rausing, got its start with its original namesake, the tetrahedron-shaped Tetra-Pak. According to the company’s corporate lore, Rausing “had a unique idea when he saw his wife making sausages” in which he envisioned a tube sealed off in segments to form a new type of beverage packaging.

Rausing’s company worked on developing this concept from 1944 to 1951. Employee, Erik Wallenberg, pictured above, is now credited with having invented the final tetrahedral package. Paid SKr 3,000 (six months of wages at the time) his invention was patented by Rausing. A 2001 article in Britain’s Sunday Mirror quotes Wallenberg’s daughter as saying:

“Obviously the Rausing family had to spend money developing and marketing my father’s idea, but I know he was unhappy about the fact that Ruben Rausing got the patent for the pack.”

The original 4-sided package, credited to both Wallenberg and Rausing, was included in The Museum of Modern Art’s 2004 exhibition entitled, Humble Masterpieces, “inspired designs that help make life easier, safer, and more fulfilling.” 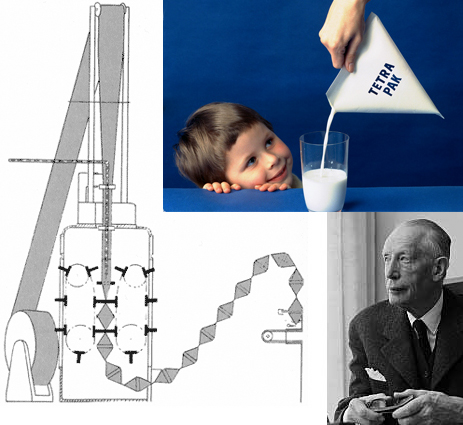 (more pictures & more to read after the jump) 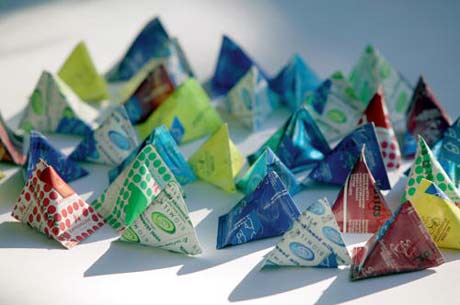 There were also innovative hexagonal-shaped crates, created for this
package, in which 18 Tetra Packs are snugly arranged in layers. The
company credits Harry Järund for this. 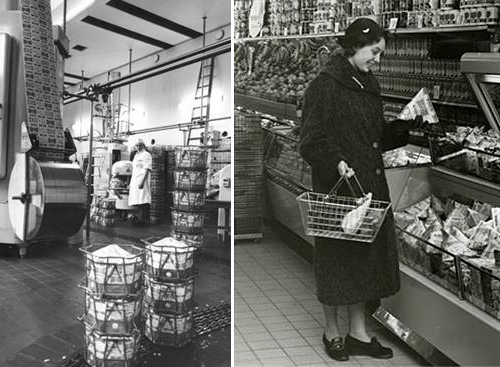 For interesting movies of the original tetrahedral packages being manufactured, see the “FILMER & LJUD” links at the bottom of this web page on the “naringslivshistoria” site.

A curious sidebar to Rausing’s career as head of Tetra Pak… In 1953 he proposed a radical public-works project to drain the Sound separating Denmark and Sweden, in order to improve transportation between the two countries. In an article written by Rausing, himself, for the newspaper, Dagens Nyheter, he stated:

“The profits, which can barely be calculated, would be enormous. Denmark and Sweden would have solid land border, and each side would get a part of newly won land to colonize. Copenhagen and Malmö would get elbowroom to grow towards each other until they meet out on the former seabed. New concepts of beauty will be created instead of the old ones, which the land reclamation will unavoidably destroy. New cities and communities are envisioned along new traffic roadways set on the muddy bottom of a Sound that will be transformed into a blooming, garden-like landscape.”

This project was never attempted. Rausing died in 1983.

Tetra Pak discontinued the tetrahedron for a time. In the 1960’s they stopping making the machines that made them, only reintroducing a new machine recently, in 2005. They now refer to the tetrahedron-shaped package as the “Tetra Classic.”