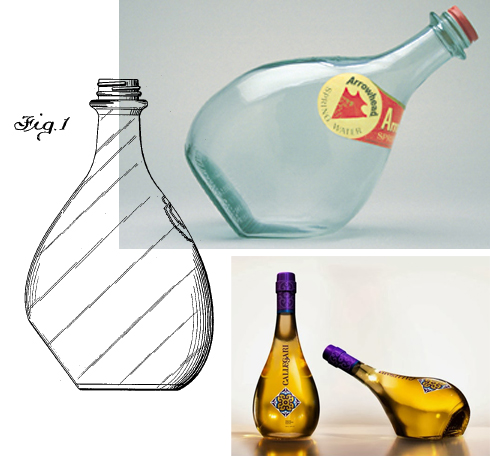 A recent design for an olive oil bottle “that can stand upright and also inclined on its side” by Pereira & O’Dell (lower right) is clearly the same exact idea as Walter Landor’s 1955 water bottle for Arrowhead & Puritas.

The “tilt bottle” Landor developed, which had two flat surfaces, did not have to be lifted to refill an empty glass, nor did it require a handle to be passed from person to person. The bottle’s classical curves resembled the shape of early nineteenth-century glass flasks, and its rocking motion made the container easy to use. The design’s main advantage, Walter stressed, was that “the user-by tilting the bottle-[could] pour without lifting.” Walter’s team of designers had created an elegant and practical decanter for storing and serving bottled water.

Landor’s involvement with the design of the tilt bottle is well-documented. Looking at the bottle’s 1955 design patent, however, one might reasonably conclude that it was was designed, not by Landor or his associates, but by Robert S. Suttle, Vice President & Sales Manager of Arrowhead Puritas Water, Inc. 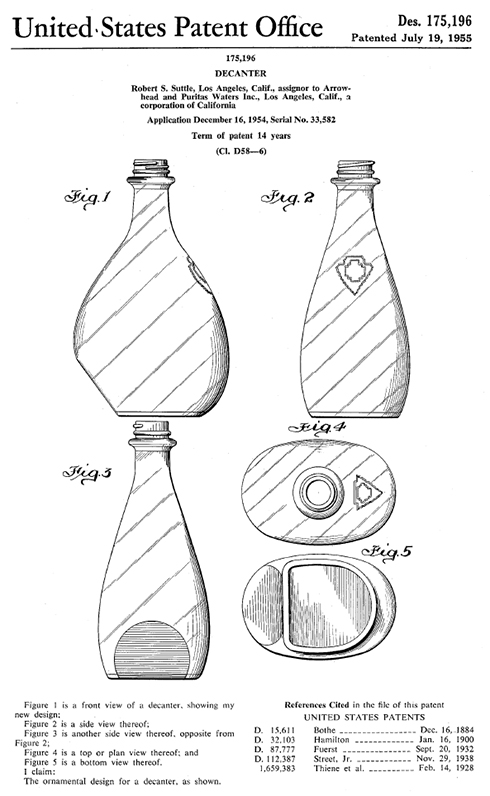 I wonder, is it a standard practice that an officer of the company (rather than the package designer) be named as the inventor if a patentable package is designed as a “work for hire?”

Is this the cost of doing business? That creatives must cede any claims of authorship?

Perhaps we “creatives” overvalue the idea. An idea alone is not really worth so much, if you’re not in a position to profit from it. While it’s nice to think that fair credit is given to those who originally come up with a creative idea, in business the original idea is often secondary to its execution.

For the designer who is not also a gifted entrepreneur, maybe letting others take credit for the idea is simply the price of admission.  Sort of like how songwriters had to share their songwriting credits (and royalties) with Elvis Presley in order to have him record their songs. (See: Heartbreak Hotel)