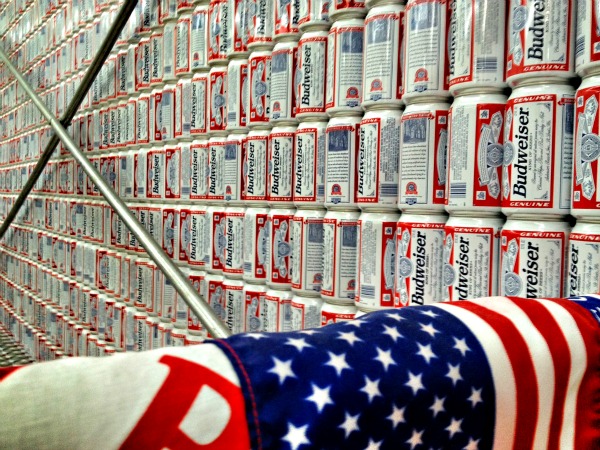 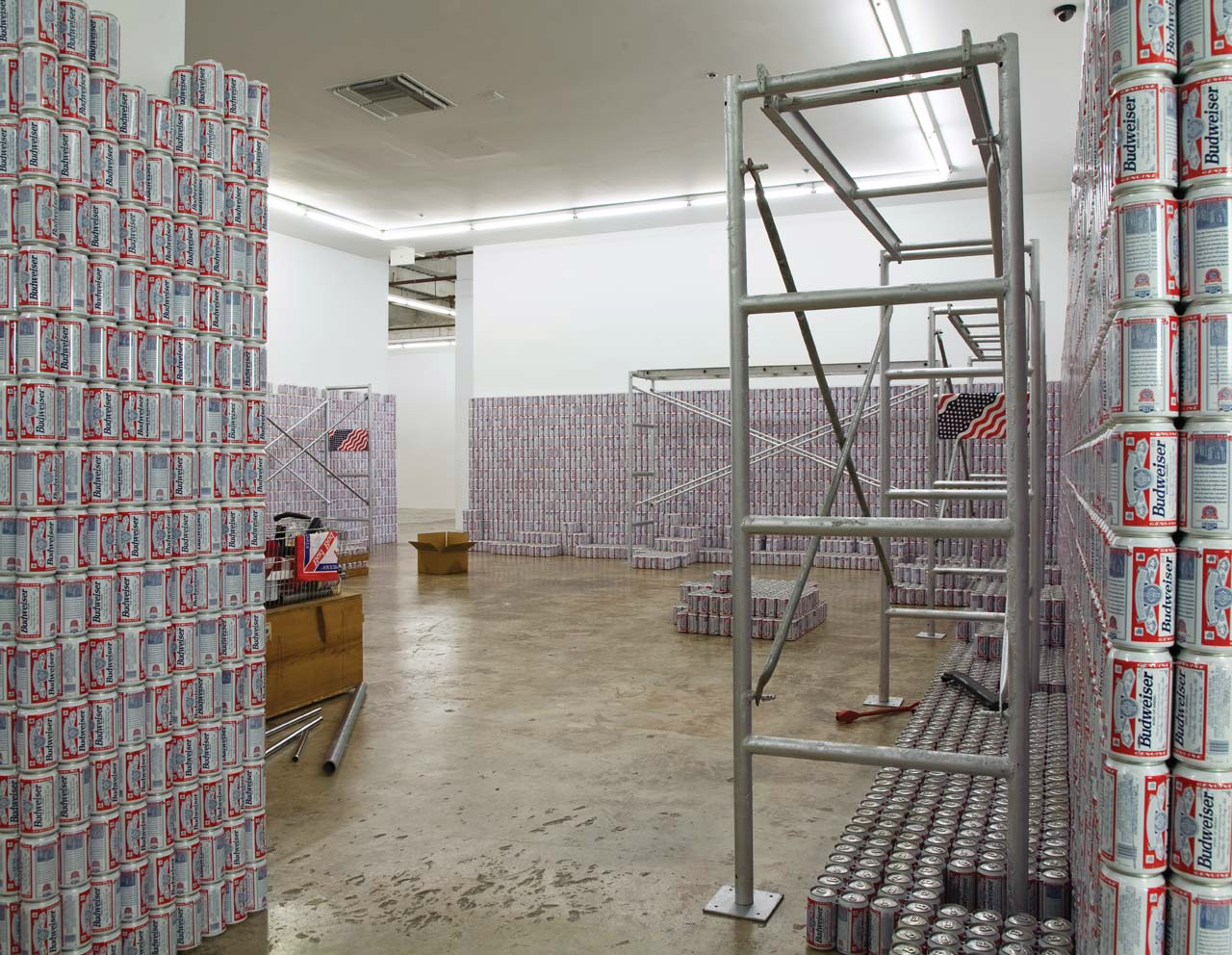 “This Piece Has No Title Yet” is the title of Cady Noland’s 1989 installation with boxes, flags and hundreds of stacked Budweiser six-packs.

In the late 1980s Noland began a series of sculptures and installations examining the masculine underpinnings of the American dream, embodied in men’s beer consumption. Crate of Beer (1989) is a wire-mesh basket full of empty Budweiser cans. In her 1989 untitled installation at the Mattress Factory in Pittsburgh, Noland stacked six-packs of Budweiser atop one another. Metal scaffolding transformed these mountains of alcohol into a construction site. For the artist, Bud cans are as potent an American symbol as Old Glory, both being red, white, and blue.

Noland stacks hundreds of Budweiser six-packs along the walls, erecting sheer cliffs at the base of which shorter rows and pyramids of beer cans are ordered. Presented here is an image of overwhelming intoxication and, at the same time, incredible waste, the whole mighty edifice destined to be chugged and pissed away…

Then, about a decade ago, for whatever reason, she absented herself. Noland hasn’t had a gallery or museum exhibition in more than 10 years. When her work turns up in group shows it is said that she tries to have it removed.

Cady Noland… who holds the record for the highest price ever paid for an artwork by a living woman ($6.6m), is a reclusive figurative sculptor whose work explores the sordid underbelly of the American dream. It has been over a decade since she has publicly exhibited her work, leading some to wonder whether she has stopped making art.

Marc Jancou, of the gallery by that name on West 24th Street, has sued both Sotheby’s and Cady Noland after the auction house withdrew a work that he had consigned by the artist, Cowboys Milking (1990), from its contemporary day sale this past fall. Another work by the artist, Oozewald (1989), sold for $6.6 million with premium, a new artist’s record, at the Sotheby’s fall evening sale (over a high estimate at $3 million), just one day before Mr. Jancou’s Noland was to have been sold. Mr. Jancou now claims that the auction house owes him $6 million in damages and that Ms. Noland owes him $20 million.

News of the lawsuit broke in the art world newsletter the Baer Faxt, which reported that the sometimes fickle Ms. Noland “apparently disavowed the work,” so Sotheby’s yanked the consignment. The lawsuit’s complaint doesn’t mention this, but says Ms. Noland “tortuously interfered with the consignment agreement by persuading Sotheby’s to breach the agreement.”

If nothing else comes from dealer Marc Jancou’s ongoing legal battle with legendarily reclusive artist Cady Noland, it at least has offered a bit of window into how difficult it is to get ahold of her. In fresh court documents filed in the last few days, a representative says he had to visit her New York apartment no less than four times in an attempt to serve her legal papers. The first time, he wrote in an affidavit, the artist “refused to come down or let me in the building to serve the papers.” Finally, after three further unsuccessful attempts, he was let in by another tenant, sliding the papers under Noland’s door.

Julia Halperin, Disgruntled Dealer Doubles Down, Adding $20 Million to His Claim Against Cady Noland and Sotheby’s, ARTINFO, May 23, 2012

« “I Just Wanted You To Be Proud of Me”
Budweiser Cigarettes »