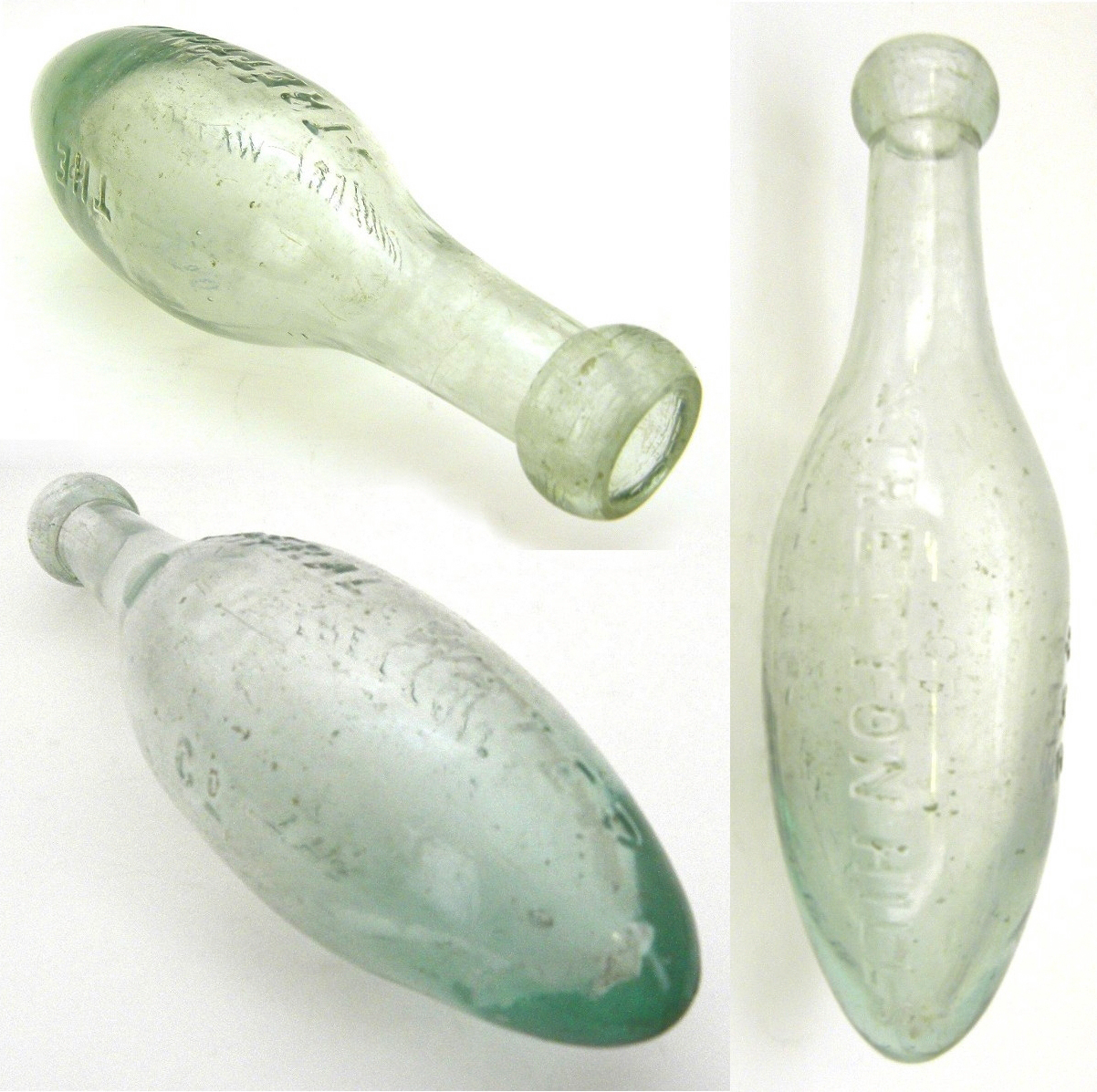 Torpedo bottle for sale on eBay ($60)

In addition to the rocket and bullet shaped bottles we’ve been looking at, another category of projectile shaped bottle is the “torpedo bottle.”

The Torpedo bottles have a round end to prevent them from being stood up. The idea was that the soda kept in contact with the cork and stopped the cork from shrinking; the corks would dry up and shrink on upright bottles, causing the bottle to loose pressure. A side advantage for the merchant was that the consumer had to finish the beverage before the bottle could be laid down.

Seems counterintuitive, right? A container for liquids that cannot stand upright on its own?

The idea that, once opened, a beverage in this bottle had to be finished before putting the bottle down, makes pulling the cork on one of these bottles a little bit like pulling the pin on a hand grenade. (Or like drinking from one of those awful bottomless Champagne glasses.)

Schweppe’s water once came in this type of bottle… (via: ebay) 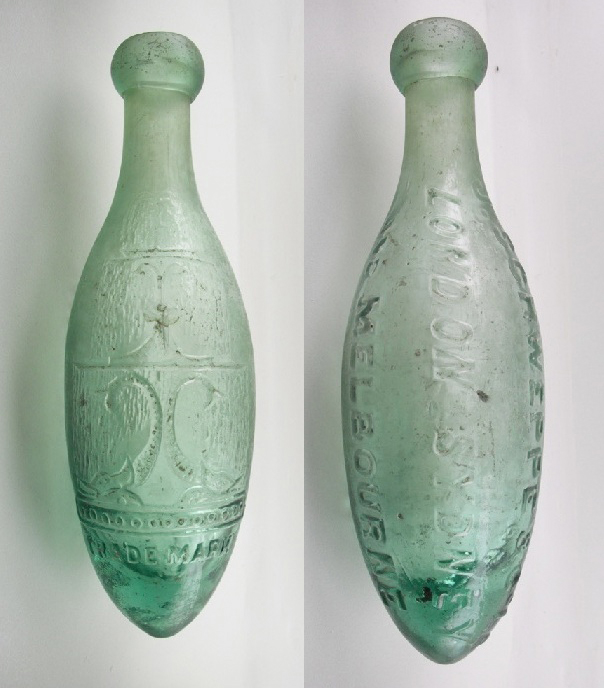 There seem to be a lot of other names (round-enders, ovate bottles, egg bottles, bomb bottles) but mostly these are called either “torpedo bottles” or “Hamilton bottles” after William Francis Hamilton, whose aerated water business required them:

I generally use a glass or earthen bottle or jar of a long ovate form for several reasons, viz: — not having a square bottom to stand upon it can lie on its side, of course, no leakage of air can take place the liquid matter being always in contact with the stopper. It permits its contents to be poured out more easily and consequently with less loss of fixed air. It can be much stronger than a bottle or jar of equal weight made in the usual form and is therefore better adapted for packing carriage etc.

There is, however, some debate about the true purpose of the “Hamilton” bottle’s shape and whether it was really Hamilton’s invention to begin with…

Hamilton bottles are in fact a misnomer and this designation springs from errors made by bottle collectors in the 1960s. The error was due to misinterpreting the words patent and Hamilton that appeared on the side of some early mineral water bottles. Hamilton did not patent the torpedo bottle shape and indeed may not have been the inventor…

Torpedo shaped bottles appear… at the end of the 18th century. The glass bottles made at the time were often not strong enough to contain the pressure of the gas and could explode (the bottom blew off). Glass capable of holding fizzy liquids was only made in Britain at the time and was very expensive; as a result it was reserved for expensive liquids such as Champaign. Drinks such as ginger beer were normally contained in stoneware bottles. The torpedo shape allowed cheaper glass to maintain the necessary strength to hold carbonated drinks. The fact that it made it necessary to lay the bottle on its side and so keep the cork moist was an added benefit but not the original raison d’etre. (After all conventional wine bottles are stored on their side to keep the corks moist). Torpedo bottles were also made in stoneware at the beginning of the 19th century. By 1914 glass making had improved considerably and the torpedo bottle was unnecessary being largely replaced by Malmstrom’s 1901 patent design and even ‘normal’ shaped bottles.

–Centurion (from Great War Forum:
“Trench food and their containers”)

(The above mentioned Malmstrom’s 1901 patent and another bottle photo, after the fold…)