I can’t find it now, but for a long time I’ve had a plastic “photo cube” like the one on the right*. Instead of photos, I had inserted six square color gels into it, so that two sides were red, two sides were green and two sides were blue. When you rotated it in the light, you’d see magenta, yellow or cyan where adjacent sides overlapped, as per additive color mixture.

Steven Doyle’s 2009 logo design for Cooper Union reminds me a lot of that object. The animation shows a rectangular C and U, which rotate and slide into one another, forming a cube with transparent colored sides. The letters start out with three colors, but when the transparent sides overlap, they form an additional 3 colors.

“The logo is rooted in logic. If you draw a C or a U as a square form, you would arrive at our basic module: three planes that intersect at right angles. If you twist the U one rotation, its three planes would complement the three planes of the C, creating a perfect square, an ideal geometric form… We have allowed our planes to intersect just at their points, and we have encouraged them to be transparent… The three primary colors are the genesis of all colors, and this little baby looks really cool when it spins.” 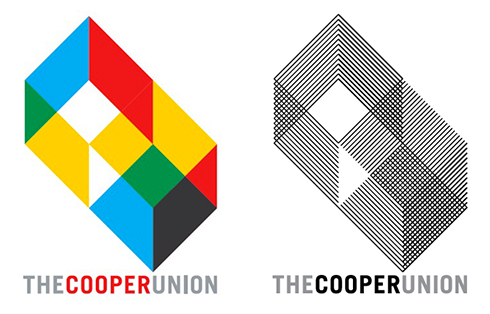 Always interested in the color/black & white dichotomy, I was interest to see that Doyle also made a black and white version of his logo. Not with shades of gray, but with intersecting lines.

There was also a logo repeat pattern proposed. I don’t find a lot of evidence that this pattern was ever implemented much, although these flip flops below appear on Doyle Partners’ site… 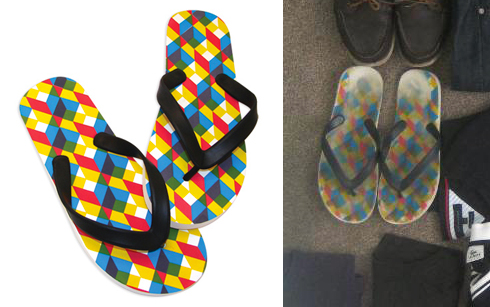 … and I found evidence online that at least one pair might actually exist.

*Footnoted Digression: the Photo Block photo cube above appears to be a product which contains its packaging, rather than the other way round.

(Another animation of The Cooper Union logo, after the fold…)