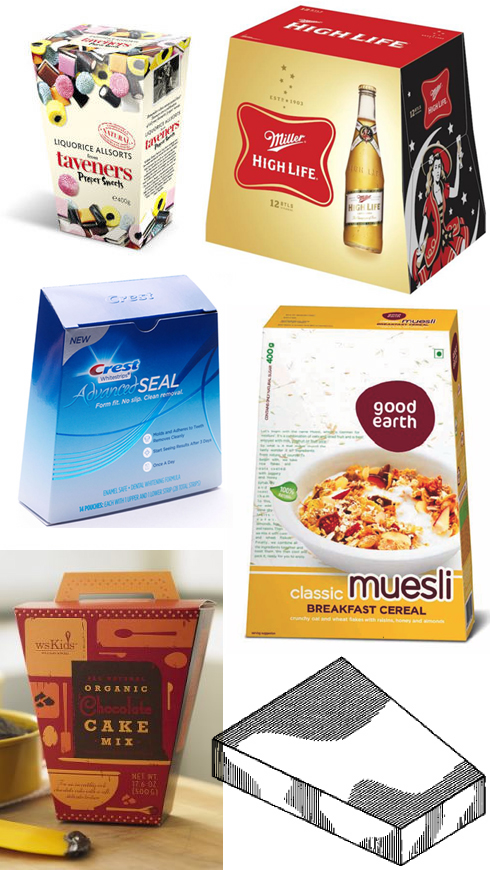 Nearly rectangular—but not quite. Trapezoidal boxes might seem like a pointlessly inefficient variation. They can be close-packed, but only if they are stacked in an alternating, right-side-up / up-side-down pattern. Which is maybe OK for shipping in some cases, but unless the packages are designed for right-side-up / up-side-down display—(See: Coffeine)—maybe not so useful for saving space on a store shelf.

Still, they make a remarkably dynamic impression. To the extent that we’re accustomed to rectangular boxes, these packages create a near optical illusion. Heroically photogenic, as if you’re looking up (or down) at a tall building in perspective.

(Can you patent a polyhedral shape? After the fold…) 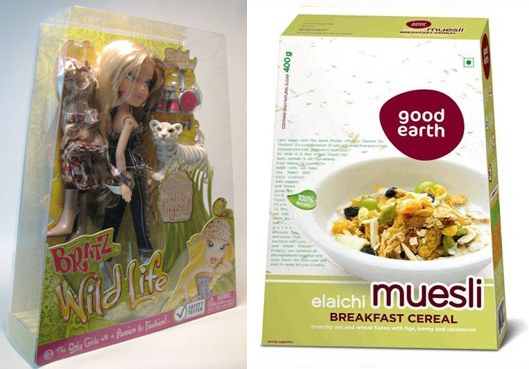 Avesthagen Limited, the company that makes Good Earth muesili (above right), was recently granted a retroactive patent from India’s Patents Office for its trapezoidal box design. According to their press release:

”…with the intent to modernize the look of its popular cereal boxes, Avesthagen’s design team worked on various options to come out with the Trapezoidal look that is not only unique but stylish as well. The trapezoid-shaped boxes have helped cut the clutter on the retail shelves and created a distinct identity for Good Earth range of breakfast cereals.”

This was similar to something that MGA Entertainment tried and failed to achieve for their trapezoidal “Bratz” packaging (above left). Seeking broad trademark protection in 2004, MGA filed an application to trademark:

When MGA’s application was denied, they appealed to the Trademark Trial and Appeal Board (TTAB) and despite statements asserting their having established an identity based on trapezoidal shaped packaging…

“MGA’s tremendous success with its BRATZ® brand,… in conjunction with its trapezoidal shaped packaging, has created a strong visual impression in the minds of consumers, such that when consumers see the trapezoidal packaging in advertising and on store shelves they immediately connect the packaging with the BRATZ® line of dolls and related products.”

They were again denied in 2007. The TTAB did not consider it sufficient justification for trademarking “trapezoidal cardboard boxes”. (The least of MGA’s problems, as it turned out, since Mattel effectively put Bratz out of business last year.)

Some might say that to try and trademark or patent a basic, polyhedral shape is ridiculously preemptive. Like trying to patent the wheel or the incline plane. As if there were no “prior art” here.

Even so, the question remains: why was Bratz’s “trapezoidal cardboard box” trademark denied while just three years later “Good Earth” won patent protection for their trapezoidal cardboard box? Different countries—different results? Different product categories—different results? Or was it simply that Bratz had sought too broad of a protection? Much of the decision seemed to be based on the opinion that the boxes, themselves, were not “goods in trade.” (See: the TTABlog)