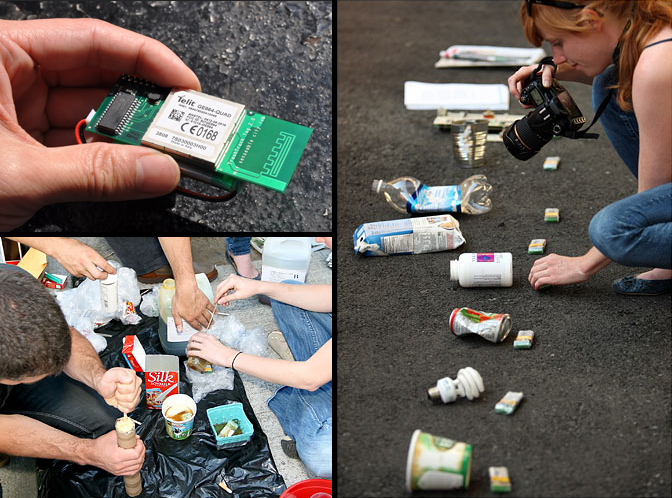 “… once the product has been used up, and the package is empty, it becomes suddenly visible once more. This time, though, it is trash that must be discarded or recycled. This instant of disposal is the time when people are most aware of packages. It is a negative moment, like the end of a love affair, and what’s left seems to be a horrid waste.”

The moment of packaging disposal may be a downer for the consumer, but after the garbage and recycling trucks pull away from the curb, those “suddenly visible” packages become invisible once more. What happens next is something that many people wonder about.

Elizabeth Royte, in her book, Garbageland, did the environmental sleuth-work of trying to track down exactly where her family’s garbage came to rest, after it left the curb.

Trash Tracking
Now, in yesterday’s NY Times, I see that researchers have begun using electronic tracking devices attached to individual pieces of trash to learn more about the fate of of what we discard into our municipal waste streams:

Through the project, overseen by M.I.T.’s Senseable City Laboratory, 3,000 common pieces of garbage, mostly from Seattle, are to be tracked through the waste disposal system over the next three months. The researchers will display the routes in real time online and in exhibitions opening at the Architectural League of New York on Thursday and the Seattle Public Library on Saturday…

Brett Stav, a senior planning and development specialist for the Seattle Public Utilities, which collects about 2,100 tons of trash and recyclables a day, said that aside from the help with logistics, he saw “tremendous educational value” in the experiment.

“There is this hidden world of trash, and there are ramifications to the choices that people make,” Mr. Stav said. “People just take their trash and put it on the curb and they forget about it and don’t think about all the time and energy and money put into disposing of it.”

It’s funny in a way to see a liquid soap bottle as the subject this elaborate (real time) satellite tracking map—(from the Senseable City Lab site)— but this higher level of interest and scrutiny into what happens after the “instant of disposal” has got to be a good thing.

Any discarded package not recycled, incinerated or lost along the side of the road, will most likely wind up in a landfill. Landfills are, themselves, a sort of container, but they are not primarily full of packaging. Packaging makes up something closer to 1/3 of what gets put into them.

… solid waste, and particularly used packaging, is an emotionally fraught subject. There is shame in elimination. People don’t like to touch or even think about their wastes. Garbage must disappear, be kept out of sight…

When you add to these conflicted feelings the emotional content… lurking in packaging, the combination is very powerful. Newspapers give solid waste much of its bulk, but packages give it its personality. They were charismatic in the store, and they draw the eye in the landfill as well. Packages, including corrugated boxes, wooden pallets, and other shipping materials most consumers never see, constitute about 30 percent of U.S. municipal solid waste. They are extremely visible in landfills, but they are even more prominent in the landfills of our minds.

At the Fresh Kills landfill (future parkland) site the packaging is still there, but no longer visible. Two of the four garbage mounds are now capped so that they look like ordinary hilltops, albeit with occasional methane vents and no trees. If you are a regular reader of box vox then you may already know that I’m performing there in eight days…

This Landfill is Your Landfill*

Save the Date: “Songs About Packaging” at Freshkills Landfill, Saturday, September 26 at noon. Those attending this FREE
event will be taken on a Magical-Mystery-Tour-style bus ride to the top
of Freshkills Landfill where I’ll perform a solo set of
packaging-related songs. Transportation to the location will be
provided by the same bus(es) that they use for the regular tours of the
Fresh Kills site. (And everyone who comes gets a free CD.) Click
here to RSVP and reserve a seat.

Live Radio Show: I’ll be performing a couple of songs from “Songs About Packaging” live on WRXP in New York on Rich Russo’s Anything, Anything, this coming Sunday (Sept. 20th) at 9:00 PM. Can be heard online streaming: here.

*Footnoted Digression: The Woody Guthrie, “This Land is Your Land” reference is coincidentally apropos to our landfill, here on Staten Island, since, in Guthrie’s original draft for the lyrics, he had originally written “Staten Island” and then crossed it out and changed it to “New York Island”.