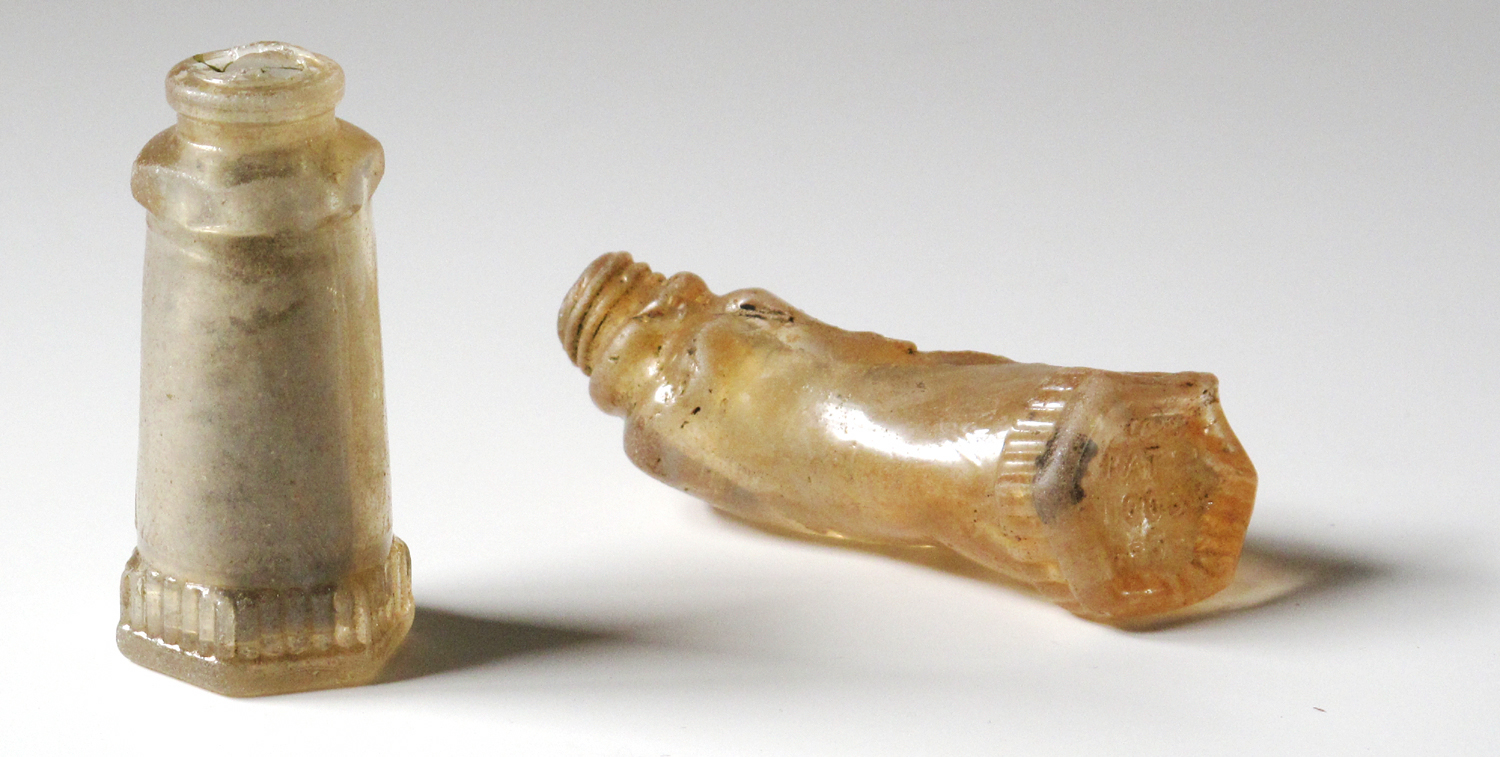 Number six in our uncapped landfill bottle series: two matching bottles: one chipped—one melted. More de-branded glass bottles from Dead Horse Bay, but in this case we have a patent number (110034) embossed on the bottom…

A bottle designed by Edwin T. Reynolds. No mention of what the bottle was meant to contain, but the patent was assigned to “Lorr Laboratories” of Patterson, NJ.

A search for any additional patents assigned to “Lorr Laboratories” turns up this odd “container cap”—also designed by Edwin T. Reynolds. Again, no mention of the product…

Could this be the cap the went with these bottles? It was patented around the same time. What did Lorr Laboratories manufacture?

“We manufacture a polish called Dura-Gloss and only produce it to be sold in all stores for 10 cents. Our business is to furnish that, and we also furnish some brands of miscellaneous drugs.”

–from Lorr Laboratories’ testimony before on “H.R. 8367”—a bill to amend the Tariff Act of 1930 by reclassifying brushes or hair pencils for manicuring purposes. April 18, 1940 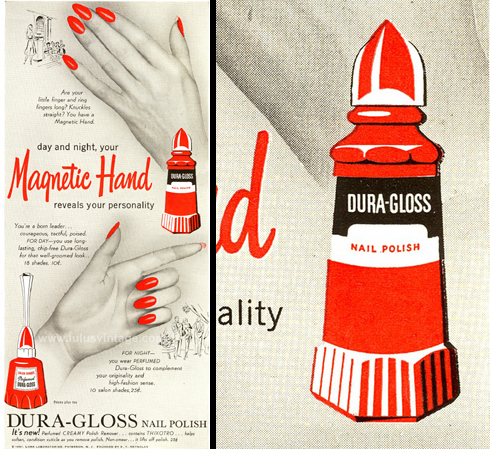 Nail polish. That art deco bottle cap design was meant to represent a fingernail! Logical to show the nail polish color on the cap, and a good way to demonstrate its effect as a fingernail color. But, for some reason, lethally sharp and claw-like in its execution.

In the early 1950s Dura-Gloss changed their bottle design, but retained the fingernail cap concept: 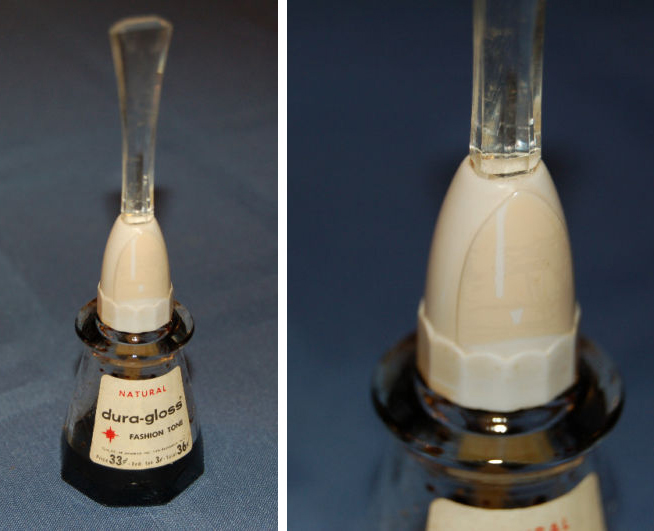 Dur-Gloss was not the only company to try this idea, although they may have been the first. Northam Warren’s Cutex also came out with a similar color-identifying fingernail cap. 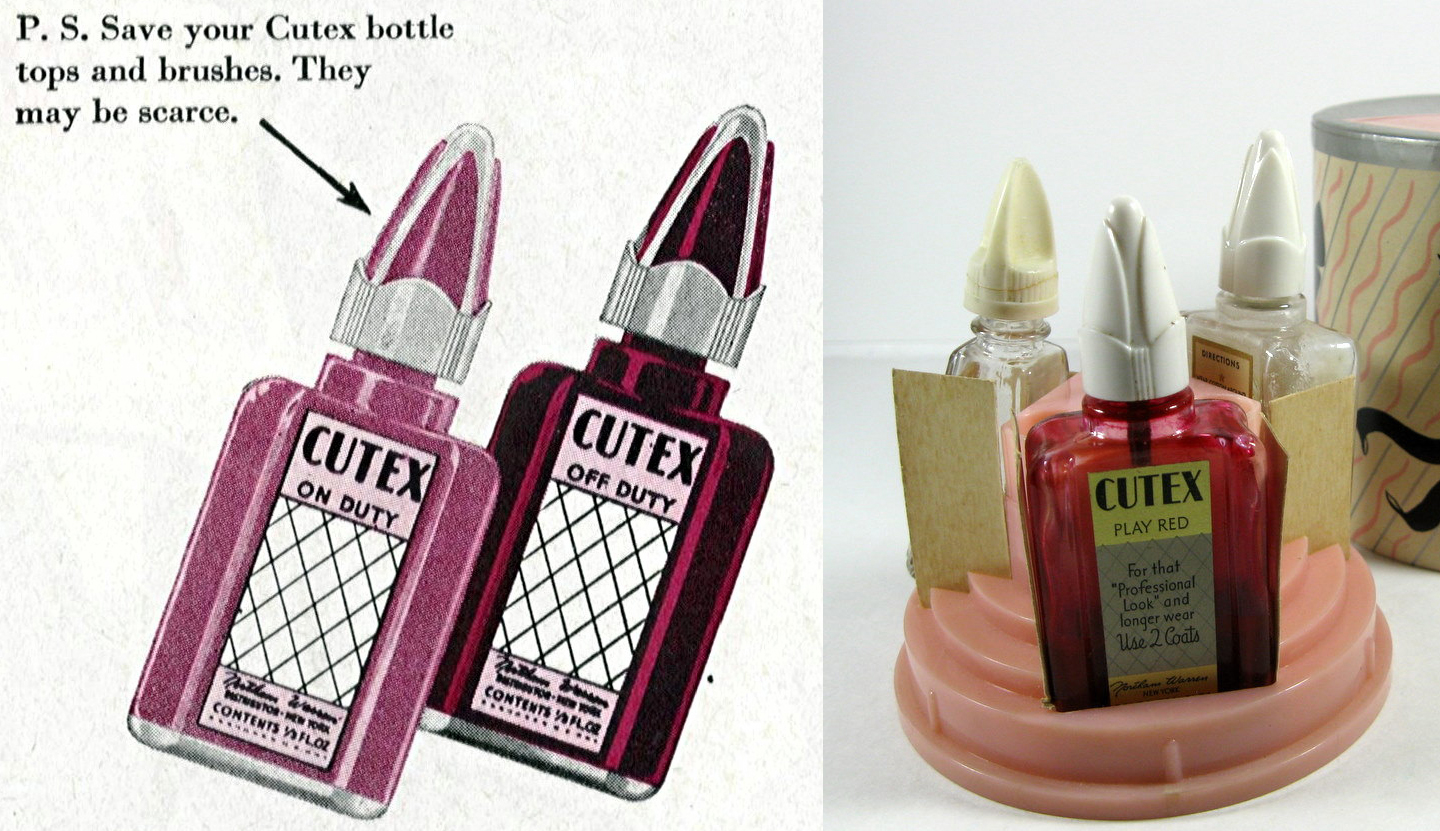 Which is interesting because during the 1940s hearings on “H.R. 8367”—(a bill to amend the Tariff Act of 1930 by reclassifying brushes or hair pencils for manicuring purposes)—Lorr Laboratories, in opposition to the bill testified that “reclassifying brushes or hair pencils for manicuring purposes” would hand Cutex a monopoly and force Dura-Gloss to import their brushes from Japan during WWII. “That source of supply of the brush is very, very doubtful.”

Perhaps, however, the explanation is not so difficult if one considers that the Northam Warren Corporation, manufacturer of Cutex polish, is more interested in eliminating competition in the business of manicuring polish than it is in protecting the market for hair-pencil brushes. We therefore have the situation that if HR 8367 be enacted, Lorr Laboratories will be compelled to retire from the 10-cent in nail polishes because imported brushes would be prohibitively high and the United States Brush Co. is either unable or unwilling to sell its products to it. This situation would directly benefit Northam Warren Corporation and would give it a monopoly of the 10-cent nail-polish market. Lorr Laboratories employs 230 people and not only will the employees of this company lose their positions but the employees of practically every other company in the industry and in other industries using brushes of this type will be directly affected.