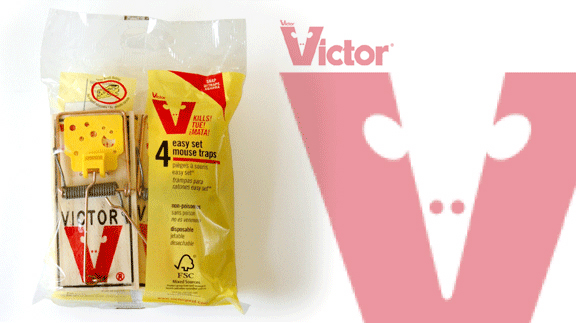 (First, a little background about me & mice…) When I was a kid I used to keep pet mice. It all started when the garbage man in my neighborhood in Sarasota, Fla. (around 1964) handed me a coffee can with a lid. Inside the can was a live, tame mouse. My mother let me keep him. (Later, in college, I graduated to pet rats, but that’s another story.) I mention my first pet mouse only to acknowledge that I have a continuing affection for rodents and to fully disclose my conflicted feelings about pest control products.

At Home Depot last month I lingered for a quite a while in the pest control section thinking about the Victor® mouse traps, their logo and whether or not I wanted to blog about it. At the time I decided that, as a rodent-lover, I would not go there.

Soon afterwards our good friend and neighbor, Jacqueline had a sudden infestation of mice. This was due to some packages of bird seed and cat food that were stored in the basement, but were not mouse-proof. (Bad animals taking food from the mouths of good animals?) She went to Home Depot and purchased the entire Victor mouse trap product line—doubtless the very same mouse traps whose aesthetic properties I had been ruminating over. It was the coincidence of Jacqueline’s use of Victor mouse traps that has led me to write about this, after all.

(A shocking photo and more to read after the jump…)

I generally admire the use of negative space in a logo to form an image between the letters—where you only see the picture if you "read between the lines." The arrow between the “E” and the “x” in the FedEx logo is a good example. I don’t think that the Victor “mouse logo” is as successful. The mouse is very cute in a whimsical 1960’s sort of way, but I don’t think it says "pest" like it probably should. Also, their product branding is pretty inconsistent with "Victor" set in different typefaces, sometimes all caps, sometime upper and lower case. Also they flirt with a fractal hall-of-mirrors thing when they spell Victor with the mouse-V and also put it at the top left fork of the mouse-V. If that’s the logo lock up, then shouldn’t the little mouse-V in “Victor” also get a tiny “Victor” with a mouse-V above that? And so on and so on? Similar to the self-referencing Morton Salt containers…

But I digress. Back to the mouse traps’ cellophane bag. These mouse traps each have a plastic yellow “paddle” with holes that seem intended to make it more cheese-like—(i.e. swiss cheese).  I assumed that these holes also had a functional use of enabling a bait (like soft cheese or peanut butter) to cling more tightly to the paddle. There is, however, on the package, an illustration of cheese with a red crossed-out symbol and the words “Never Needs Baiting.” The bilingual package is very unclear (as is their web site) about why this should be so. Is the plastic paddle impregnated with a mouse-attracting scent? Or is it just in the self-annihilating nature of curious mice that they tend to want to check out plastic paddles on mouse traps?

And what of Jacqueline? As it turned out, her grass seed / mouse ecosystem had been quietly growing in her basement to pied.jpgper proportions until the grass seed finally ran out. That’s how the situation came to light. They got hungry and began coming upstairs. With her array of Victor products, she killed 26 mice in a few short days—with no end in sight! At one point, like the Valiant Little Tailor she slew two mice in one trap. (See photo below.) Clearly this was no run-of-the-mill mouse problem. Professional exterminators were therefore employed. 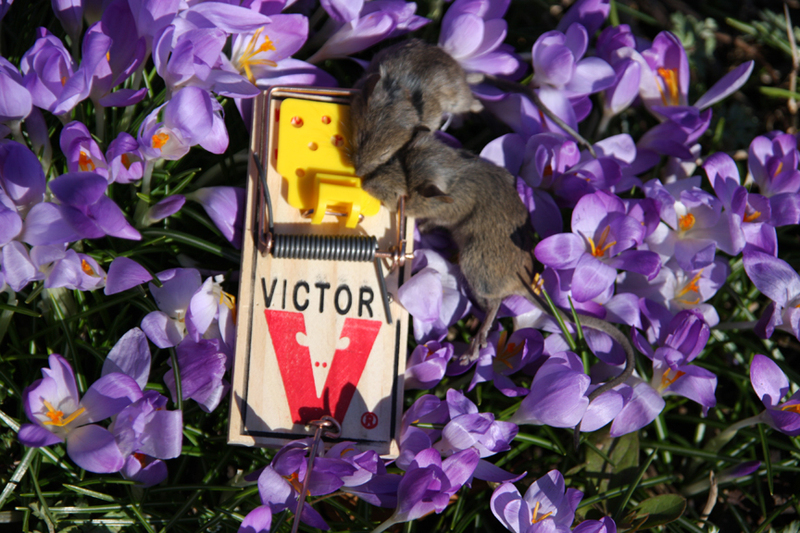 I particularly like the color contrast between the lavender crocus petals and the yellow cheese pedal in Jacqueline’s still life with two dead mice.