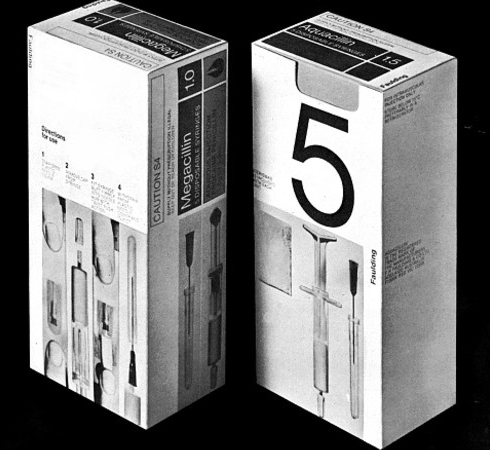 It’s “hypodermic syringe week” on box vox. I didn’t know it when I started, but it turns out to be habit forming.

Today we have some graphic design and branding for syringes boxes. Like capsules, I tend to think of syringes as packages, in their own right. But like many containers, syringes require their own protective containers.

Pre-filled Megacillin syringes from the 1970s were probably disposable, but most of the examples below are from an earlier time when syringes were reusable medical instruments, rather than disposable medical waste.

Vintage syringe branding above is from Russia, Czechoslovakia, Germany, Italy and the United States. (Photos mostly came from eBay.)

A couple of observations: this is not consumer packaging for the store shelf, so it’s interesting to see deluxe gold and silver foil packs. The differentiation of colors here seem to be about syringe sizes — a visual aid for doctors and nurses perusing the medical supply cabinet… A nice variety of diagrammatic syringe illustrations…