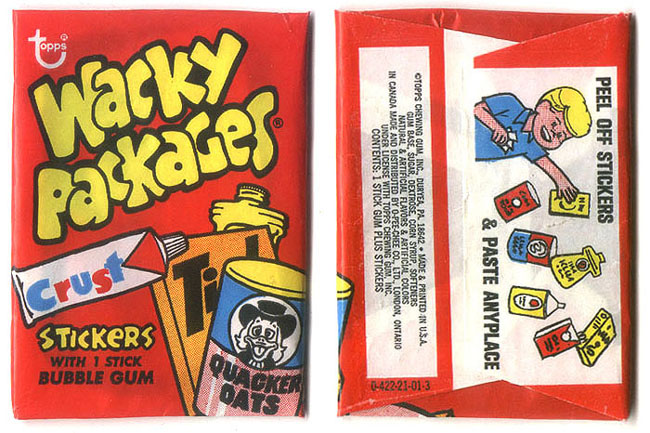 Before there were Garbage Pail Kids, there were Wacky Packages, a strange line of humorous trading cards & stickers for kids from Topps that first appeared in 1967.

Entirely based on existing consumer packaging, each Wacky Package satirized either the product itself, or else some other unrelated cultural subject. Each set was sold with a stick of bubble gum and packaged in a wrapper.

The concept was usually based on some look-alike word in the logo. Thus, Gravy Train become “Grave Train” (an oddly prescient parody about a brand of dog food that will kill your dog); Chef Boy-ar-dee becomes “Chef Girl-ar-dee Feminist Spaghetti—approved by Women’s Lib” (showing signs of its 1960’s vintage); and Duzn’t Do Nuthin’ is based on “Duz” detergent, a product that no longer exists (and really shows its age by featuring a Beatnick as the punch-line!)

(lots more images and more to read after the jump)

Similar to Mad Magazine and Cracked Magazine, these trading cards feature a broad, sarcastic sort of humor, that many who grew up in the sixties now credit for their skeptical view of media and advertising.

Art Spiegelman, (best known for his graphic novel Maus) designed the first Wacky Packages during his tenure at Topps.

Spiegelman’s employment with Topps included writing and drawing various card series and other humorous items. His biggest contribution, however, came about in response to another product that the company was planning. An executive at Topps was interested in issuing a series of cards featuring the miniaturized labels of supermarket products. Spiegelman, seeing little curiosity value in commercial artwork that was not antiquated enough to be charming, decided to poke fun at the project. He drew up a parody version of a company’s package art. Spiegelman’s loopy version of the product label was a hit with Topps, and “Wacky Packages” were born. Marketed with a stick of gum like baseball cards, “Wacky Packages” soon became a fixture of the 1970s alongside such items as the lava lamp, the hula-hoop, and black-light posters.

–from an online JRank Encyclopedia

An example of their collaborative production process: the sketch below is Fred Wheaton’s, the concept by Renee Davis & Fred Wheaton, and the final painting is by John Zeleznik. 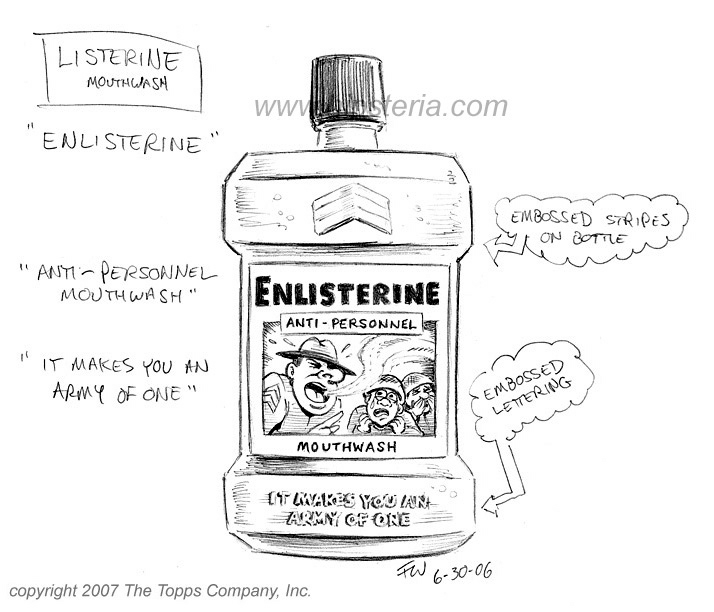 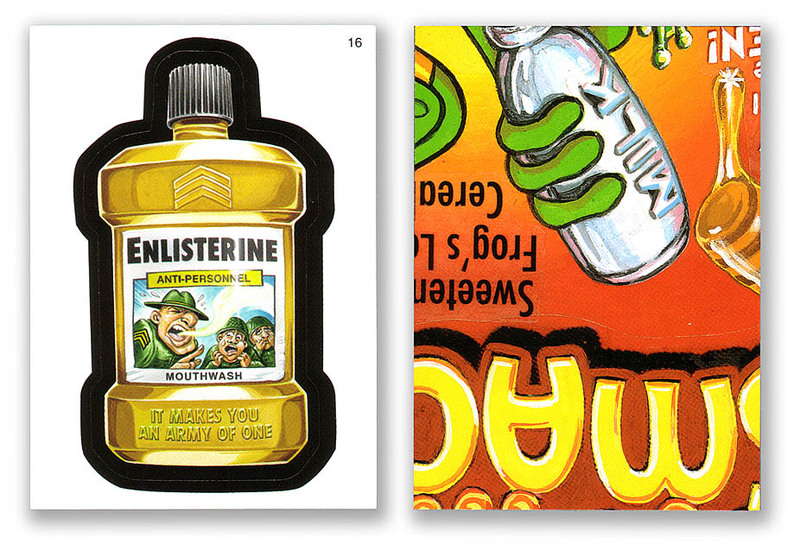 The back of the card shows a part of a large Wacky Package puzzle—(the idea being that, if you collected the full set, you could put the puzzle together.)

Below is an excerpt from Jay Lynch’s 2002 description of “How a Wacky Package Series was put together—from my point of view at least.” (I love that he quantifies his payments in terms of grocery purchases!):

I would get a phone call from Len Brown or Art Spiegelman telling me it was time for me to do some roughs for a new series of Wacky Packages. I would usually submit a dozen roughs at a time.

Len would tell me, usually on the phone, which food conglomerates I could not parody, based on cease and desist letters from prior series. I had a master list of taboo companies—and this would be added to, by phone, until a new master list would be compiled and sent to me.

In those days I had a pretty good working knowledge of who made what, though. So I would give Len a verbal list of maybe 20 or so products, of which he would pick a dozen. Sometimes he would suggest products, sometimes he would come up with the gag title on the phone, and I would add to it on the rough…

I think in the 60s I got $8 a rough. By the 70s it had gone up to $20 a rough. By the 80s it was $125 a rough, and so on. What I got for a rough always remained the same amount in actual buying power. It has gone up with inflation, though. One rough pays about the same as a week’s worth of groceries. Always has—and always will.

This product is not authorized or endorsed by any of the companies who are the subject of parody. The products we are spoofing—including our own—are all good ones, no kidding.