Photo on left via Worthpoint; center photo: still from “Shotgun Painting” (video below); on right: photo of Burroughs standing with two of his paintings (via illustrator, Philip Grisewood’s Flickr Photostream)

“There is no exact process. If you want to do shotgun art, you take a piece of plywood, put a can of spray paint in front of it, and shoot it with a shotgun or high powered rifle. The paint’s under high pressure so it explodes! Throws the can 300 feet. The paint sprays in exploding color across your surface. You can have as many colors as you want.”

“Plinking” is not new to us. Bottles and cans have long been used for target practice by shooters. (See: Target Packaging)  The shooting of pressurized spray paint cans as a means of making abstract paintings was new to me. The middle photo (above) is a screen shot from the video below: my evidence that Krylon spray paint was indeed the brand preferred by the author of Naked Lunch…

The top left photo is of a vintage Krylon can, offered for sale as an antique. (Later versions of this can feature Web 2.0 colored balls rather than overlapping colored circles.) A more authentic artifact might have been the one mentioned below…

Graham: Do you have any favourite piece of Burroughs memorabilia that you own?

Vale: Oh, that I own? Gee, I guess I had a target that he shot. I took him out shooting and I asked him if I could keep the target he shot and he autographed it. And I also, he had a spray can in his studio in Kansas… he’s sprayed it; it was a used spray can in using his artwork. He’d sprayed it a bunch of different rainbow colors. I asked him if he would autograph it and he did and I kept it.

(One of his “shotgun paintings” follows, after the fold…) 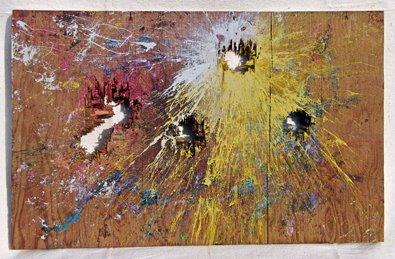