Yesterday I read in the Times, that photographer, Robert Whitaker has died.

Today I’m learning more about the two photos he took that were each used as the cover photo for the Beatles’ “Yesterday and Today” LP.

I knew that both photos were sometimes there simultaneously, one on top of the other.

I first learned about the “butcher” cover in 1969 when was in 9th or 10th grade. Visiting Clarissa and her fraternal twin sister, Clara, I noticed that their copy of the Yesterday and Today album looked different from the one I had. The title font was the same (“Siegfried” by Dieter Steffmann) but the photo was different.

She told me that it was some kind of censorship thing—that people had been offended by the raw meat in conjunction with the doll parts on the original cover.

I remember going straight home and peeling up a corner of the photo on my copy of the record and being pretty bummed out that I did not find any hidden raw meat.

Reaction was immediate, as Capitol received complaints from some dealers. The record was immediately recalled under orders from Capitol parent company EMI chairman Sir Joseph Lockwood …

Capitol initially ordered plant managers to destroy the covers, and the Jacksonville plant delivered most of its copies to a landfill. However, faced with so many jackets already printed, Capitol decided instead to paste a much more conventional cover over the old ones. The new cover, featuring a picture of a less-than-content band posed around an open steamer trunk, had to be trimmed on the open end by about 3 mm (1/8 inch) because the new sheet, known as a “slick”, was not placed exactly “square” on top of the original cover. Tens of thousands of these so-called “Trunk” covers were sent out. As word of this manoeuvre became known to the public, owners of the altered cover attempted, usually unsuccessfully, to peel off the pasted-over cover, hoping to reveal the original image hidden beneath. Eventually, the soaring value and desirability of unpasted-over Butcher covers spurred the development of intricate and complex techniques for peeling the Trunk cover off in such a way that only faint horizontal glue lines remained on the original cover…

from Wikipedia’s entry about “Yesterday and Today”

What surprises me now, is to learn the extent to which a whole cottage industry with special terminology has sprung up around this minor branding fiasco and the concealed album covers.

Copies that have never had the white cover pasted onto them, known as “first state” covers, are very rare and command the highest prices. Copies with the pasted-on cover intact above the butcher image are known as “second state” or “pasteovers”; today, pasteover covers that have remained unpeeled are also becoming increasingly rare and valuable. Covers that have had the Trunk cover removed to reveal the underlying butcher image are known as “third state” covers; these are now the most common (and least valuable, although their value varies depending on how well the cover is removed) as people continue to peel second state covers. The most valuable and highly prized First and Second State Butcher Covers are those that were never opened and remain still sealed in their original shrink wrap. Since the first documented collector’s sale of a mono Butcher cover LP in 1974, which fetched US $457.00, the value of first state mono versions has consistently appreciated by around 100% per year.

In 1987, former president of Capitol Records, Alan Livingston released for sale twenty-four “first state” butcher covers from his private collection. When the original cover was scrapped in June 1966, Livingston took a case of already-sealed “Butcher” albums from the warehouse before they were to be pasted over with the new covers, and kept them in a closet at his home. These albums were first offered for sale at a Beatles convention at the Marriott Hotel near Los Angeles International Airport on Thanksgiving weekend 1987 by Livingston’s son. These still-sealed pristine items, which included nineteen mono and five stereo versions, are the very rarest “pedigree” specimen “Butcher Covers” in existence. These so-called “Livingston Butchers” today command premium prices among collectors, the five stereo versions being the most rare and valuable of these. In April 2006, Heritage Auction Galleries sold one of the sealed mono “Livingston Butchers” at auction in Dallas for about $39,000.

There are also websites specifically devoted to devotees of this record cover — thebutchercover.com, for example.

(More photos from Robert Whitaker’s “butcher” session, after the fold…) 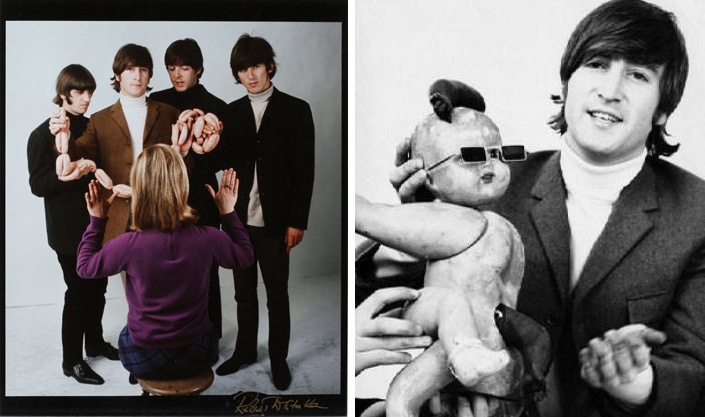