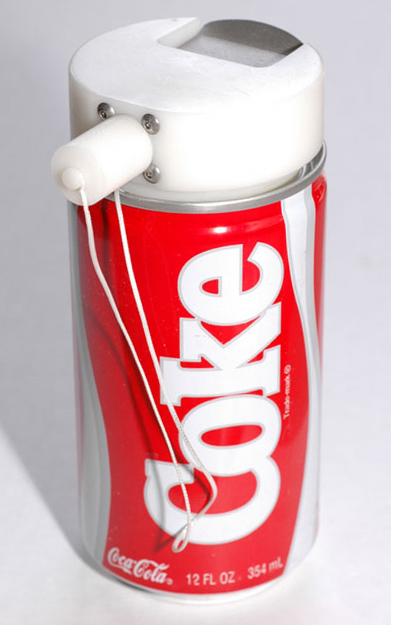 No, nothing to do with Coke Zero. This post is actually a follow-up to the Canada Dry space-branding of Astronaut Water.

Coca-Cola is another of those companies that has sought borrowed interest and outer-space glamour from the space program:

In 1985, astronauts tested the “Coca-Cola Space Can” [on left) aboard the Space Shuttle Challenger. The experiment was not really a success, due to the lack of refrigeration and the zero gravity conditions, but on the lighter side of space, floating “soda balls” did provide a source of entertainment for the astronauts.

Coca-Cola, however, did not confine their testing to NASA. Exemplifying the new sort of partisan/non-partisan posture that transnational companies can now assume, Coke also sought help from Russian cosmonauts. In 1991 aboard the Soviet space station Mir, a new & improved version of their “Space Can” was put through its paces. 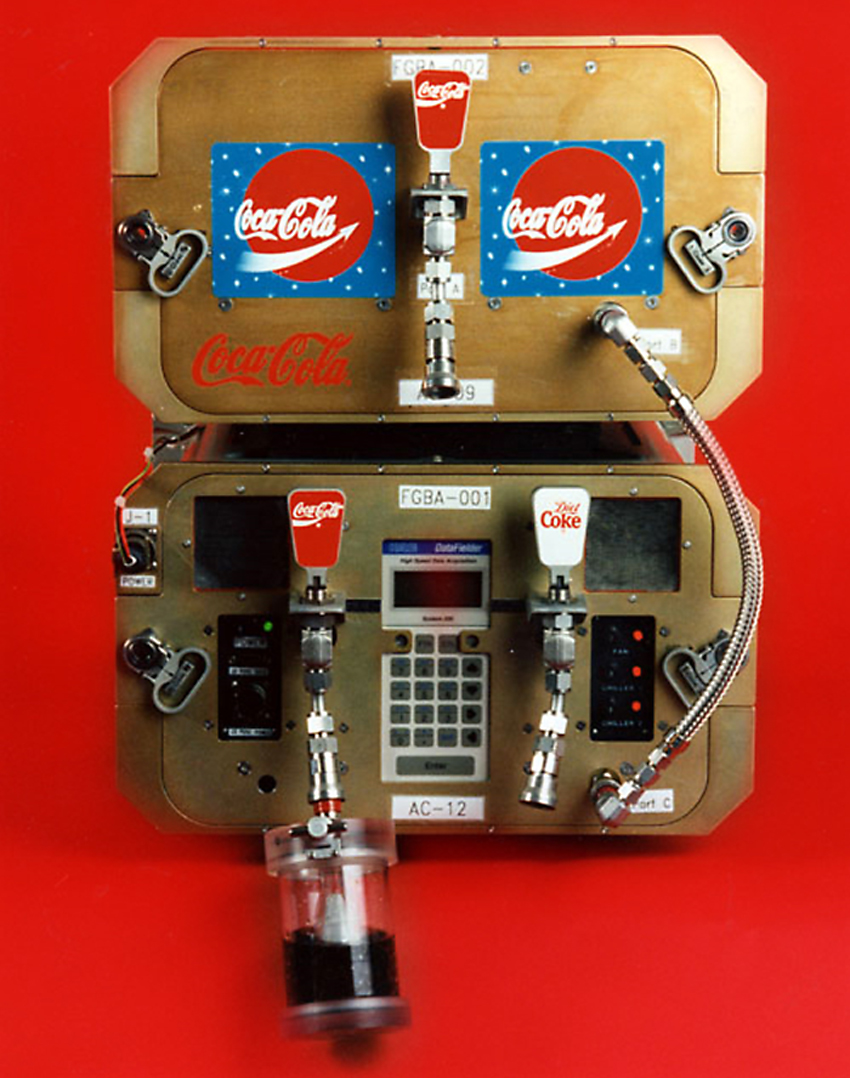 The 3rd trip was in 1995, this time with the Coca-Cola Space Dispenser on board (Aka the FGBA or “Fluids Generic Bioprocessing Apparatus”). The dispenser was designed to contain 1.65 liters each of Coca-Cola and Diet Coke and provide astronauts the opportunity to enjoy a refreshment break. They had to dispense their drink into a “Fluids Transfer Unit” (a sealed drinking cup) through a quick connect on the dispenser. To save power, the dispenser would chill the liquid when it was about to be consumed. As the drink passed from the storage container to the drinking can, it would flow past cooling coils that would chill it, one drink at a time.

Although the FGBA is more of a zero-gravity soda-fountain approach, rather than a single-serve space pack (like the can) it appears from the photo below that Coca-Cola was still entertaining options like the plastic Coke bottle with collapsible inner pouch on left. (Quite reminiscent of baby bottle liners, no?) 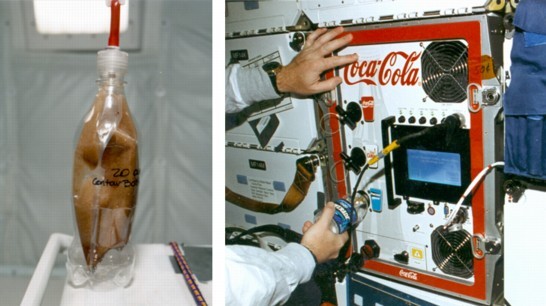 As strange and amusing as it is to contemplate a branded outer space, the underlying trend seems to have been towards a privatization of the space program(s).

Last year, PepsiCo Inc. paid $5 million to the agency to tow a giant soda can into orbit for a series of commercials featuring space-walking cosmonauts. “The Russians are selling their souls because they need hard currency,” said Marco Antonio Caceres, a space analyst at the Teal Group, a Fairfax (Va.) aerospace researcher.

The Russians aren’t the only ones exploiting commercial possibilities. NASA recently accepted $1.5 million from Coca-Cola Co. to install a futuristic soda machine aboard the space shuttle Endeavour so astronauts could have the Real Thing during a 10-day flight. In fact, U.S. companies have more than doubled their investment in space since 1990, to more than $7 billion.

In the current economic conditions, that particular carbonated “bubble” may have now burst, but what I’d like to know is—(since the the FBGA provided both)—which beverage did American astronauts & Russian cosmonauts find was best suited for their weightless consumption: regular Coke or Diet?